Henry Holiday (17 June 1839 –15 April 1927) [1] was a British historical genre and landscape painter, stained-glass designer, illustrator and sculptor. He is part of the Pre-Raphaelite school of art.

Holiday was born in London. He showed an early aptitude for art and was given lessons by William Cave Thomas. He attended Leigh's art academy (where a fellow student was Frederick Walker) and in 1855, at the age of 15, was admitted to the Royal Academy. Through his friendship with Albert Moore and Simeon Solomon he was introduced to the artists Dante Gabriel Rossetti, Edward Burne-Jones and William Morris of the Pre-Raphaelite Brotherhood. This movement was to be pivotal in his future artistic and political life.

In the same year, 1855, Holiday made a journey to the Lake District. This was to be the first of many trips to the area, where he would often holiday for long periods of time. Whilst there, he spent much of his time sketching the views which were to be seen from the various hills and mountains. He wrote, "For concentrated loveliness, I know nothing that can quite compare with the lakes and mountains of Westmorland, Cumberland and Lancashire".

Holiday worked in both oils and watercolours. In 1858, his first picture, a landscape painting, was exhibited at the Royal Academy and immediately sold; from that year his work was frequently shown at the Academy and elsewhere. Other pictures include:

Holiday spent much time at the studios of Sir Edward Burne-Jones, where groups of artists would meet to discuss, exchange and pool ideas. The influence of Burne-Jones can be seen in Holiday's work.

In 1861, Holiday accepted the position of stained glass window designer for Powell's Glass Works, after Burne-Jones had left to work for Morris & Co. During his time there he fulfilled over 300 commissions, mostly for customers in the United States. He left in 1891 to set up his own glass works in Hampstead, producing stained glass, mosaics, enamels and sacerdotal objects.

Holiday's stained glass work can be found all over Britain. Some of his best is at the chapel of Worcester College, Oxford (c.1865); Westminster Abbey (the Isambard Kingdom Brunel memorial window, 1868); St Luke's Church, Kentish Town; St Mary Magdalene, Paddington (1869); and Chartered Accountants' Hall, Moorgate. In 2018, four of his stained-glass windows were reinstalled in Chartered Accountants' Hall after being lost for almost 50 years following their removal for an extension in 1970. [8]

Other work and personal life

Holiday worked for architect William Burges for a period, including providing wall and ceiling paintings for Worcester College, Oxford (1863–64) [9] and furniture paintings – including Sleeping Beauty for the headboard in the bedroom – at Burges's London home, The Tower House. [10] The Sleeping Beauty bed is now in the collection of the Higgins Art Gallery & Museum, Bedford. Holiday has four oil paintings in British national public collections. [11]

In October 1864, Holiday married Catherine Raven and they moved to Bayswater, London. His wife was a talented embroiderer who worked for Morris & Co. They had one daughter, Winifred. [12]

In 1867, Holiday visited Italy for the first time and was inspired by the originality of the Renaissance artists he saw on display there. [13] In 1871 he went to Ceylon as part of the "Eclipse Expedition". His astronomical drawings were subsequently published in the national press and attracted great interest.

On his return to England in 1872, he commissioned architect Basil Champneys to design a new family home in Branch Hill, Hampstead, which was named "Oak Tree House". In 1888, William Gladstone was a visitor.

In January 1874, Holiday was commissioned by Lewis Carroll to illustrate The Hunting of the Snark . He remained a friend of the author throughout his life. [12] Holiday's illustration to the chapter The Banker's Fate might contain pictorial references to the etching The Image Breakers by Marcus Gheeraerts the Elder, to William Sidney Mount's painting The Bone Player, and to a photograph by Benjamin Duchenne used for a drawing in Charles Darwin's The Expression of Emotions in Man and Animals . [14]

From 1899, Holiday worked with Jessie Mothersole as studio assistant and she remained closely associated with the family until Holiday's death. In 1906 Holiday gave Mothersole a drawing of his daughter Winifred, which later was acquired by the British Museum. [15]

In 1907, Holiday went to Egypt, painting a series of watercolours and illustrations on ancient Egyptian themes. These were exhibited at Walker's Gallery, London, in March 1908 jointly with Mothersole who had been working on Egyptian archaeological drawings and watercolours since 1903/4. [16] In 1907–08, he commissioned the building of a holiday home, Betty Fold, [17] in his favourite part of the Lake District.

Between 1912 and 1919 he painted the apse of the east end of St Benedict's Church at Bordesley, Birmingham, depicting Christ in Glory with angels, and saints in arcading, below, in Byzantine style. [18]

Holiday had been a socialist throughout his life and, together with his wife Kate and daughter Winifred, supported the Suffragette movement. The family were close acquaintances of Myra Sadd Brown and Emmeline Pankhurst and her daughter, and had organised local suffragette meetings in the Lake District. 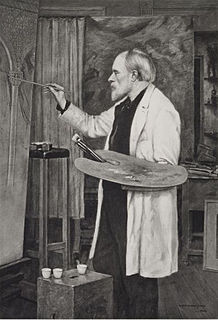 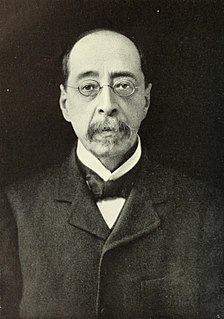 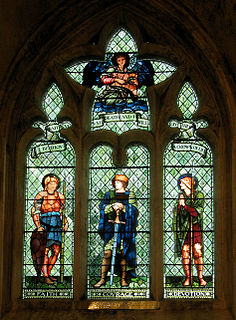 Sir William Blake Richmond KCB, RA, PPRBSA was an English portrait painter, sculptor and a designer of stained glass and mosaic. He is best known for his portrait work and decorative mosaics in St Paul's Cathedral in London. 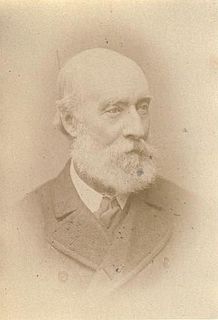 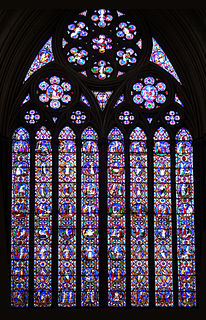 A revival of the art and craft of stained-glass window manufacture took place in early 19th-century Britain, beginning with an armorial window created by Thomas Willement in 1811–12. The revival led to stained glass windows becoming such a common and popular form of coloured pictorial representation that many thousands of people, most of whom would never commission or purchase a painting, contributed to the commission and purchase of stained-glass windows for their parish church.

Christopher Whitworth Whall was a British stained-glass artist who worked from the 1880s and on into the 20th century. He is widely recognised as a leader in the Arts and Crafts Movement and a key figure in the modern history of stained glass. 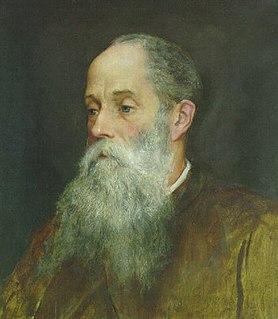 John Roddam Spencer Stanhope was an English artist associated with Edward Burne-Jones and George Frederic Watts and often regarded as a second-wave pre-Raphaelite. His work is also studied within the context of Aestheticism and British Symbolism. As a painter, Stanhope worked in oil, watercolor, fresco, and mixed media. His subject matter was mythological, allegorical, biblical, and contemporary. Stanhope was born in Yorkshire, England, and died in Florence, Italy. He was the uncle and teacher of the painter Evelyn De Morgan. 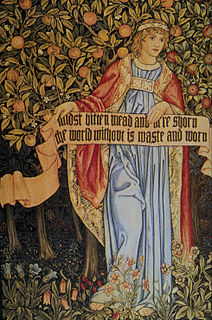 John Henry Dearle was a British textile and stained-glass designer trained by the artist and craftsman William Morris who was much influenced by the Pre-Raphaelite Brotherhood. Dearle designed many of the later wallpapers and textiles released by Morris & Co., and contributed background and foliage patterns to tapestry designs featuring figures by Edward Burne-Jones and others. Beginning in his teens as a shop assistant and then design apprentice, Dearle rose to become Morris & Co.'s chief designer by 1890, creating designs for tapestries, embroidery, wallpapers, woven and printed textiles, stained glass, and carpets. Following Morris's death in 1896, Dearle was appointed Art Director of the firm, and became its principal stained glass designer on the death of Burne-Jones in 1898.

William Wilson was a Scottish stained glass artist, printmaker and watercolour painter. He was a member of the Royal Scottish Academy. He was appointed an OBE.

Hope is a late oil painting by the Pre-Raphaelite artist Edward Burne-Jones. It was painted on commission for Mrs. George Marston Whitin of Whitinsville, Massachusetts in 1896.

Gaetano Giuseppe Faostino Meo was an Italian-British artist's model, landscape painter, and a noted craftsman in mosaic and stained glass. His unpublished autobiography is a useful source for art historians of the Aesthetic Movement and Edwardian Era.

Jessie Mothersole (1874–1958) was a British archaeologist, artist, and author. 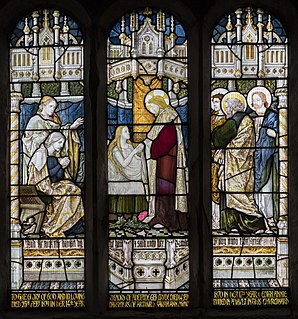 Edward Holmes Jewitt (1849–1929) was a Pre-Raphaelite artist working in stained glass and other media. He was one of the two chief designers, along with Carl Almquist, for the Lancaster firm of Shrigley and Hunt, producers of stained-glass windows and church-fittings. In recent years his work has begun to be studied and admired, though claims that he was a genius have not gone uncontested.