Last updated September 16, 2019
For others of the same name, see Henry Thynne.

Thynne was the eldest of the three sons of Thomas Thynne, 1st Viscount Weymouth (1640–1714), of Longleat, a substantial landowner in Wiltshire and Gloucestershire, by his marriage to Lady Frances Finch, a daughter of Heneage Finch, 3rd Earl of Winchilsea. [1] He was christened on 16 February 1675 at Drayton Bassett. [2] [3] He was educated at home and was very interested in literature. In 1692 he visited the Netherlands, Germany, and Italy. [1] As a young man, he taught French and Italian to his contemporary Elizabeth Singer (1674–1737), in whom Bishop Thomas Ken, then living at Longleat, had taken an interest when she was twelve. [4] He married Grace Strode, the daughter and heiress of Sir George Strode and Grace FitzJames, who brought him a fortune of £20,000 on 29 April 1695. In To the Painter of an Ill-Drawn Picture of Cleone, the Honorable Mrs Thynne, a poem by Anne Finch, Countess of Winchilsea, Thynne appears under the name of "Theanor", [5] [6] while "Cleone" was his wife Grace, to whom Lady Winchilsea addressed several of her poems. [7]

At the 1695 English general election Thynne was put up as a candidate for parliament at Weobley but in an unpredictable borough was unsuccessful. [1] He did not stand again until the first general election of 1701 when stood for Weobley again and as a backup at Weymouth and Melcombe Regis. He was rejected at Weobley again but was returned in a contest as Member of Parliament Weymouth. He was not an active Member and was blacklisted for opposing the preparations for war with France. At the second general election of 1701, he stood at both Milborne Port and Tamworth and opted to sit for Tamworth. At Tamworth, he was returned unopposed with Thomas Guy (1644–1724), the speculator and founder of Guy's Hospital. [8] Guy was a Whig, [9] while Thynne was a Tory. [1] Thynne supported the motion on 26 February 1702 which vindicated the Commons’ proceedings in the impeaching the Whig lords. He was returned again as MP for Weymouth and Melcombe Regis at the 1702 English general election. He voted against agreeing with the Lords' amendments to the bill increasing the time for taking the oath of abjuration on 13 February 1703, but in April 1703, he fell ill, and was described by his father as 'overrun with the spleen'. He voted for the Tack on 28 November 1704. At the 1705 English general election, he was returned again as Tory MP for Weymouth and voted against the Court candidate for Speaker on 25 October 1705. He became less active in Parliament. At the 1708 British general election he was returned for two constituencies, Weymouth and Weobley, and chose to sit for Weymouth, before his sudden death. [1]

Thynne became extremely obese. After he had died suddenly on 20 December 1708, the findings of a post mortem were reported in a letter to Edward Harley from his sister:

Though he never complained, his vitals were wholly corrupted, his heart was like a lump of fat and blood, when they touched his lungs they fell to pieces and had an imposthume in them which they think was the cause of his sudden death, his liver wasted, and an ulcer in his kidneys, and a dropsy in one side of his belly. I think this a strange mixture of distempers, but more unaccountable that he should not be sensible of any of them, but told his father and cousin at 12 o’clock the night before he died that he was as well as ever in his life, did not alter two minutes before his death, only said when he came downstairs his legs were weak, did not sit by his lady above six minutes before he died. [1] 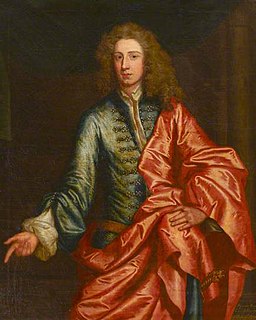 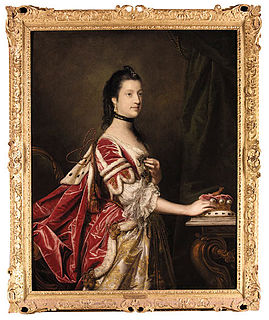 Sir William Withers of Fulham, Middlesex was an English linen draper and Tory politician who sat in the English and British House of Commons between 1701 and 1715. He was Lord Mayor of London from 1707 to 1708.

Henry Thynne may refer to: 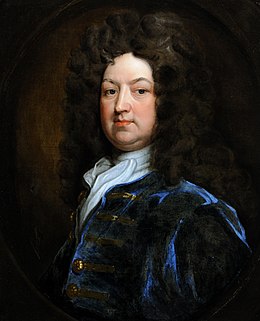 General Charles Churchill was a British Army officer who served during the War of the Spanish Succession and a English politician who sat in the English and British House of Commons from 1701 to 1710. He was a younger brother of John Churchill, 1st Duke of Marlborough and both his military and political careers were closely connected with his brother's. Along with Marlborough's Irish Chief of Staff William Cadogan, he was one of Churchill's closest advisors. He was a Tory, in contrast to his Whig brother who tolerated and possibly used his Tory connections.

Thomas Coke of Melbourne Hall, Melbourne, Derbyshire was an English courtier and politician who sat in the House of Commons between 1698 and 1715. Although a Tory on paper, he was prepared to support the Whigs in order to keep hold of his public offices.

James Kendall of Birdcage Walk, Westminster and Carshalton, Surrey was an English Army officer and Tory and later Whig politician who sat in the English and British House of Commons between 1685 and 1708. He served as Governor of Barbados from 1689 to 1693.

Thomas Webb, of Gloucester, was an English politician.

Anthony Henley (1667–1711), of the Grange, Northington, Hanmpshire, was an English Whig politician who sat in the English and British House of Commons between 1698 and 1711. He was noted as a wit.

Sir Richard Grobham Howe, 3rd Baronet (c. 1651–1730), of Little Compton, Withington and Chedworth, Gloucestershire, and Great Wishford, Wiltshire, was an English landowner and Tory politician who sat in the English and British House of Commons between 1679 and 1727.

The Honourable Maurice Ashley, of Bedford Row, Westminster, was an English Whig politician who sat in the English and British House of Commons between 1695 and 1713.

Thomas Freke, of Hannington, Wiltshire, was an English Whig politician who sat in the English and British House of Commons between 1685 and 1710.