Tichborne was the eldest son of Sir William Tichborne of Beaulieu, County Louth and his wife Judith Bysse, daughter of John Bysse, Chief Baron of the Irish Exchequer and his wife Margaret Edgeworth; his other grandfather being the statesman and general Sir Henry Tichborne, a younger son of the Tudor MP, Sir Benjamin Tichborne, 1st Baronet, of Tichborne (see Tichborne Baronets). He represented Ardee and County Louth in the Irish House of Commons.

He married Arabella, daughter of Sir Robert Cotton. They had four sons (William, Cotton, Robert & Henry), all of whom died before their father leaving no male issue, so that at his death in 1731 his titles became extinct. His son Robert Charles married Hester Salisbury and their only surviving daughter, Salisbury Tichborne, married William Aston, MP for Dunleer, and had issue. Their descendants still live at Beaulieu.

A younger son William married, in 1712, his close relative Charlotte Amelia Molesworth (daughter of Robert Molesworth, 1st Viscount Molesworth of Swords, who was half brother of Baron Ferrard through their mother Judith Bysse) and had two daughters, Arabella, who married Francis Wyatt and Wilhelmina. Charlotte Amelia was a Woman of the Bedchamber to Princess Caroline of Ansbach 1721-27. [1] Another son Henry (1684-1709) married Mary Fowke but died of drowning, without issue.

His niece Judith Tichborne (died 1749) was the third wife of the leading English statesman Charles Spencer, 3rd Earl of Sunderland. Judith was the daughter of Ferrard's younger brother Sir Benjamin Tichborne and Elizabeth Gibbs. She and Sunderland had three children who all died young. After his death she remarried the diplomat Sir Robert Sutton, and had surviving issue, including the statesman Sir Richard Sutton, 1st Baronet.

He was largely responsible for the completion of Beaulieu House, the main Tichborne residence, in its present form, which had been begun by his grandfather, Sir Henry Tichborne in 1666. 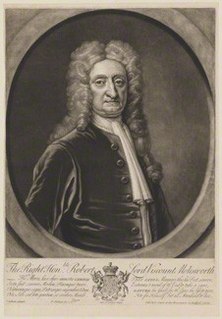 James Stevenson Blackwood, 2nd Baron Dufferin and Claneboye, styled as Sir James Blackwood, 3rd Baronet, from 1799 to 1807, was an Anglo-Irish peer and politician.

Sir Robert Sutton was an English diplomat and politician who sat in the House of Commons from 1710 to 1720. 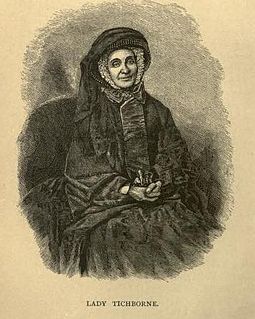 The Tichborne Baronetcy, of Tichborne in the County of Hampshire, was created in the Baronetage of England on 8 March 1621 for Sir Benjamin Tichborne, who was a Member of Parliament (MP) for Petersfield from 1588 to 1589 and for Hampshire in 1593.

John Bysse (c.1602–1680) was a member of the Parliament of Ireland during the 1630s and 1640s. He was excluded from office during the Interregnum, but became one of the most senior Irish judges after the Restoration of Charles II.

The Bysse family were prominent in the Dublin legal world in the sixteenth and seventeenth centuries and were also substantial landowners. Their main seat was Brackenstown House near Swords, and they also had a town house at Preston's Inn, on the site of the present-day City Hall. The most notable member of the family was John Bysse (1602?-1680), who became Chief Baron of the Irish Exchequer. Through his daughter Judith most of the Bysse property passed to her son Robert Molesworth, 1st Viscount Molesworth.

The High Sheriff of Louth was the Crown's representative for County Louth, a territory known as his bailiwick. Selected from three nominated people, he holds his office over the duration of a year. He has judicial, ceremonial and administrative functions and executes High Court Writs. 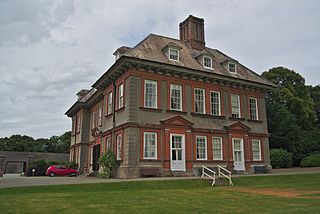 Beaulieu House and Gardens is an estate in Drogheda, Co. Louth, Republic of Ireland. It was thought to be built in the 1660s, although later research seems to suggest it was built around 1715, and it includes a terraced walled garden. It is located 2 miles (3.2 km) east of Drogheda less than half a mile from the estuary of the River Boyne.

Sir Henry Tichborne (c.1581–1667) was a leading soldier and statesman in seventeenth-century Ireland who held a number of important civil offices and military commands. During the English Civil War he was a Royalist and was praised for his successful defence of Drogheda. Although he made his peace with Parliament after the defeat of the Royalist cause, he returned to public life at the Restoration with his reputation undamaged.

Sir William Aston (1613-1671) was an English born barrister, politician and soldier who fought with distinction in Ireland for King Charles I during the English Civil War. Although he made his peace with the Cromwellian regime after the King's defeat, he is believed to have remained a convinced Royalist at heart. He was rewarded for his loyalty to the Crown with a seat on the Irish High Court Bench after the Restoration. His eldest son was hanged for murder in 1686. His last direct male descendant, also named William Aston, was the de jure 6th Lord Aston of Forfar.

Sir Thomas Molyneux (1531–1597) was a French-born statesman in Ireland during the Elizabethan era. He founded a dynasty which produced several men of distinction. His descendants became the Molyneux baronets of Castle Dillon, County Armagh.