Heo Nanseolheon (1563 – 19 March 1589), was a prominent Korean poet of the mid-Joseon dynasty. She was the younger sister of Heo Bong, a minister and political writer, and elder to Heo Gyun, a prominent writer of the time and credited as the author of The Tale of Hong Gildong . Her own writings consisted of some two hundred poems written in Chinese verse (hanshi), and two poems written in hangul (though her authorship of the hangul poems is contested). [1]

Before being known as Heo Nanseolheon, Lady Heo was known by her name Heo Cho-hui (초희, 許楚姬) or Heo Ok-hye (허옥혜, 許玉惠). Lady Heo was born in Gangneung to a prominent political family (yangban). Her father, Heo Yeop  [ ko ], was from the Yangcheon Heo clan and a distinguished scholar who fathered her by his second wife, Lady Kim of the Gangneung Kim clan. His first wife, Lady Han of the Cheongju Han clan, was a daughter of Han Suk-chang, who yielded five daughters and three sons. Her step-grandfather, Han Suk-chang, was a great-grandson of Han Hwak (the father of Princess Consort Jeongseon and Queen Sohye), and the cousin of Queen Janggyeong. His second marriage was to a daughter of a political minister, who mothered Nanseolheon and her two brothers. While her father was a Confucian and conservative official who subscribed tightly to the belief of namjon-yubi ("men above, women below"), it fell to her elder brother, Heo Bong, to recognize her budding talent and curiosity and introduce her to literature.

From an early age, she became recognized as a prodigal poet, though due to her position as a woman she was incapable of entering into a position of distinguishment. Her early piece, "Inscriptions on the Ridge Pole of the White Jade Pavilion in the Kwanghan Palace" (Kwanghanjeon Paegongnu sangnangmun), produced at the age of eight, was lauded as a work of poetic genius and earned her the epithet "immortal maiden." [1] Her innate talent for hanmun (Chinese) verse prompted him to be her first tutor in her early years, and introduce her to Chinese writing, such as the Confucian Five Classics.

However, Heo Bong was also an outspoken and influential political scholar and was eventually exiled to Kapsan for three years for his political leanings. Her younger brother, Heo Gyun, was a similarly gifted poet who studied under Yi Tal  [ ko ], a specialist of Tang poetry and a friend of Heo Pong, and he took part in her education, especially after her elder brother's exile. He fostered her education later in life and used his preferred position as a highly respected male to keep her in correspondence with literary circles. Yi Tal, his tutor, also engaged in sharing Tang poetry with Nanseolheon, whose influence became visible in the naturalism of a significant portion of her surviving work. [2]

Sometime during her life, she married the son of a civil official, Kim Seong-rip. Her marriage was an unhappy one, as recorded by Heo Gyun. Her husband often left her alone at home to pursue other women, and she maintained a cold relationship with her mother-in-law. She gave birth to two children, a girl and a boy. Her daughter died almost as soon as she was born, while her son died after living about 1 year. Within a year of her elder brother Heo Pong's death in Kapsan, she died of illness at the age of twenty-seven. [3]

The circumstances and timing of her marriage are uncertain, and the documented proof is limited and subject to conjecture. Scholars such as Kim-Renaud [2] and Choe-Wall [1] engage with her literature and hypothesize that she lived among her brothers for a significant portion of her life (during which they suggest most of her Tang-influenced and naturalistic poetry was produced), and married later. She suggests that the body of her "empathetic" poetry was produced after being married, as a result of the isolation from those who supported her literary talents and extended poetic circles. This conjecture is based on the observation that a significant portion of what is believed to be her later literature laments the plight and sufferings of married women, and her early literature follows closely in the Tang tradition, employing heavy elements of folklore and natural imagery rather than the heavier emotive language found in her later writing.

A significant amount of Nanseolheon's writing was burned upon her death per her request, and the surviving poems are collected in Heo Kyeongnan's 1913 collection Nansŏrhŏn chip. The collection consists of 211 poems, in various Chinese styles. These include koshi (traditional verse), yulshi (metered verse), cheolgu (quatrains), and a single example of kobu (rhyming prose). The writing of the early Joseon period (in the form of the political Sajang school and the more academic Sallim school) was heavily influenced by the Confucian literary tradition, and literature was primarily devoted to the expression of Confucian teachings. With the introduction of Tang poetry to Korea in the mid-Joseon Period, hanmun poetry began making significant strides as an art form. Traditional Tang poetry (koshi) was more formulaic and imposed prescriptive tonal guidelines. During the lifetime of Nanseolheon, new forms of poetry that incorporated tonal irregularities, lines with non-standard syllable counts, and length (broadly referred to as kunch'e shi, of which yulshi and cheolgu are subsets) began to come into favor. Nanseolheon's works are noted primarily for their broad range of subject matter, which is attributed in part to the drastic emotional shift evoked by her marriage. [1]

The inclusion of two kasa written in hangul in the collection is one of scholarly contention, as her authorship is in doubt. Composition in hangul was considered unworthy of expressing higher thinking of Confucian ideals, and "literary" composition in Korea was almost entirely composed in hanmun. The distinction at the time was similar to the differences between Latin composition and vernacular prose in Renaissance Europe. Her authorship of these two pieces is supported mainly by the observation that the titles of the two kasa pieces, "Song of Woman's Complaint" and "Song of Coloring Nails with Touch-me-not Balsam" are very similar to two verified hanmun (cheolgu and koshi respectively). These claims have in part discredited by recent scholarship by O Haein (Nansorhon shijip) and Kang Cheongseop (Moktongga ui pogwon e taehayo).

The poem, "Song of Autumn Night" is characteristic of her earlier, more fantastical and imagery-rich poetry. It is a seven-syllable cheolgu.

"The Young Seamstress," or "Song for the Poor Girl", is one of her poems of empathy, where she sympathizes with those from poorer economic backgrounds. It is a five-syllable cheolgu. [1]

"Woman's Grievance," another seven-syllable cheolgu, exemplifies the tone of the poetry believed to have been written after her marriage. [1] 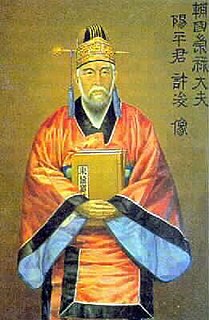 Heo Jun was a court physician of the Yangcheon Heo clan during the reign of King Seonjo of the Joseon Dynasty in Korea. 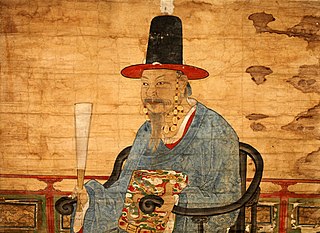 Seonjo of Joseon was the fourteenth king of the Joseon Dynasty of Korea from 1567 to 1608. He was known for encouraging Confucianism and renovating state affairs at the beginning of his reign, but also for allowing political discord and his incompetent leadership during the Japanese invasions of Korea marred his later years.

Kim Jil, also often spelled Kim Chil, was a scholar-official of the early Joseon Dynasty. He is remembered today primarily for his participation in, and betrayal of, the conspiracy led by the six martyred ministers.

Heo Gyun was a prominent Korean politician and poet, novelist, scholar, and writer of the Joseon dynasty. He was also known by his pennames, Gyosan and Seongso.

Han Myeong-hoe was a politician and soldier during the Joseon period of Korea. His nicknames were "Apgujeong", "Apgu", and "Saudang".

Queen Hyohyeon was the wife and the queen consort of King Heonjong of Joseon, the 24th monarch of the Joseon Dynasty. She was of the Andong Kim clan, posthumously known as "Hyohyeon, The Seong Empress" (효현성황후). 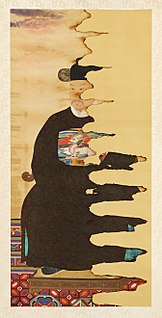 Yun Myung-hye, of the Papyeong Yun clan, was the wife and second queen consort of Yi Yeok, King Jungjong, the 11th Joseon monarch. She was Queen consort of Joseon from 1507 until her death in 1515. She was posthumously honoured with the title Queen Janggyeong or Queen Jang-Kyung.

Han Song-yi, of the Cheongju Han clan, was the wife and first queen consort of Yi Hyeol, King Seongjong, the 9th Joseon monarch. She was Queen consort of Joseon from 1469 until her death in 1474. She was posthumously honoured with the title Queen Gonghye.

Han Hwak, nicknamed Ganyijae (간이재), was a politician and a diplomat during the Joseon period of Korea. He served as Left State Councillor. His second daughter Princess Consort Jeongseon, was the wife of Prince Gyeyang.

Kim Hyo-won was a Korean Joseon Dynasty politician, writer, and Neo-Confucian scholar. His pen name was Seongam, and his courtesy name was Inbaek. He was also a leader of the Easterners faction. Kim was from the Seonsan Kim clan.

Bak Wonjong or Park Won-jong was a Korean politician and soldier during the Joseon Dynasty,who served as Yeonguijeong or Chief State Councillor from 1506 to 1510. He was a major leader of the Jungjong coup who had brought King Jungjong to the throne. His courtesy name was Baekyun. He was the uncle of Yun Im and Queen Janggyeong, the wife of King Jungjong of Joseon. He was the foster father of Royal Noble Consort Gyeong of Miryang Park clan, a concubine of King Jungjong.

Queen Wongyeong, of the Yeoheung Min clan, was a posthumous name bestowed to the wife and queen consort of Yi Bang-won, King Taejong; the third Joseon monarch; and mother of Yi Do, King Sejong; the fourth Joseon monarch.

Yangcheon Heo clan was one of the Korean clans. Their Bon-gwan was in Gangseo District, Seoul. According to the 2015 Korean census, the number of Yangcheon Heo clan is 149,505. Their founder was Heo Seon mun. He was the descendant of Heo Hwang-ok, who was a queen of the Satavahana dynasty and empress of Suro of Geumgwan Gaya, a first king of Gaya confederacy. Heo Seon mun was appointed as Gongamchonju because Heo Seon mun made an achievement when Taejo of Goryeo in Goryeo conquered Gyeon Hwon and offered resources.

Queen Wonseong of the Ansan Kim clan, was a Queen Consort of Goryeo. She was the spouse of king Hyeonjong of Goryeo.

Min Chi-rok, formally honoured as Internal Prince Yeoseong. He also known as Duke Hyojeong or Duke Sungan, was a Korean political figure of the Joseon Dynasty. He was the father of Empress Myeongseong and the maternal grandfather of King Sunjong of Korea. After he died, his son-in-law, King Gojong of Korea, promoted him to Uijeongbu and Yeonguijeong.

Yi Ji or sometimes spelled as Yi Jil, he firstly named Yi Su was a Korean Crown Prince as the second son of Gwanghaegun of Joseon and Deposed Queen Yu of the Munhwa Yu clan. He later was deposed from his position alongside with his father's abdication and then become deposed crown prince in 1608.

Prince Imhae, personal name was Yi Jin or Lee Jin and his childhood name was Yi Jin-Guk or Lee Jin-Guk was a Korean Royal Prince as the oldest son of Seonjo of Joseon from Royal Noble Consort Gong of the Gimhae Gim clan and the older brother of Gwanghaegun of Joseon. He was known for his Posthumous name Duke Jeongmin.