Her Highness Dances the Waltz (1935 film)

Her Highness Dances the Waltz (German: Hoheit tanzt Walzer) is a 1935 musical comedy film directed by Max Neufeld and starring Irén Ágay, André Mattoni and Hans Homma. [1] The operetta film is based on the 1912 operetta Hoheit tanzt Walzer by Leo Ascher (music) and Alfred Grünwald (libretto). It was made as an at the Barrandov Studios in Prague. It's one of the few Czech productions that wasn't made in Czech language. [2] The film's sets were designed by the art director Artur Berger. A French version Valse éternelle was released in 1936.

Alfred Grünwald was an Austrian author, librettist, and lyricist. Some of his better-known works were written in conjunction with the composers Franz Lehár, Emmerich Kálmán, Oscar Straus, Paul Abraham, and Robert Stolz.

Der letzte Walzer is a Viennese operetta in three acts, with music by Oscar Straus, to a libretto by Julius Brammer and Alfred Grünwald. It opened at the Berliner Theater in Berlin on 12 February 1920 and starred Fritzi Massary. It was first given in Vienna at the Theater an der Wien on 5 October 1923, with Betty Fischer, Max Hansen, and Richard Tauber in leading roles.

Leo Ascher was an Austrian composer of operettas, popular songs and film scores.

Hoheit tanzt Walzer is an operetta in three acts by Leo Ascher to a libretto by Julius Brammer and Alfred Grünwald, with a plot loosely based on Oscar Straus' 1907 operetta Ein Walzertraum. It premiered on 24 February 1912 at the Raimund Theater in Vienna. The work also appeared in a version with an extended plot under the title Hochzeitswalzer in Zürich in 1937. 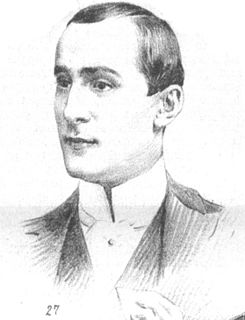 Julius Brammer was an Austrian librettist and lyricist. Some of his better-known works were written in conjunction with the composers Emmerich Kálmán, Oscar Straus, Leo Ascher, Edmund Eysler and Robert Stolz.

Irén Ágay was a Hungarian actress. She was a leading star of 1930s Hungarian cinema, before emigrating to the United States.

André Mattoni was an Austrian actor.

The Last Waltz is a 1927 German silent romance film directed by Arthur Robison and starring Liane Haid, Willy Fritsch and Suzy Vernon. It was based on the 1920 operetta Der letzte Walzer by Oscar Straus.

The Last Waltz is a 1934 German operetta film directed by Georg Jacoby, and starring Ernst Dumcke, Max Gülstorff, and Iván Petrovich. It is based on the 1920 operetta The Last Waltz by Oscar Straus. It was remade in English in 1936.

A Waltz by Strauss is a 1925 Austrian silent film directed by Max Neufeld and starring Eugen Neufeld, Tessy Harrison, and Svet Petrovich. 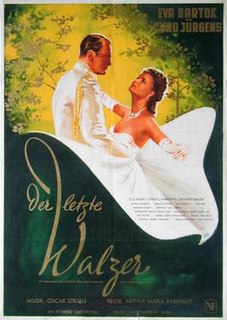 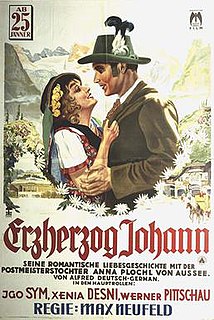 Archduke John is a 1929 Austrian silent historical drama film directed by Max Neufeld and starring Igo Sym, Xenia Desni and Paul Biensfeldt. It portrays the life of Archduke John of Austria, a nineteenth century member of the Habsburg Dynasty.

Her Highness Dances the Waltz is a 1926 Austrian silent romance film directed by Fritz Freisler and starring Claire Rommer, Magda Karmen and Walter Rilla. The operetta film is based on the 1912 operetta Hoheit tanzt Walzer by Leo Ascher (music) and Alfred Grünwald (libretto).

The Vagabonds is a 1916 Austrian silent comedy film directed by Jacob Fleck and Luise Fleck and starring Josef König, Liane Haid and Marietta Weber. The film's score was based on the operetta of the same name composed by Karl Michael Ziehrer.

The Beloved of His Highness is a 1928 German silent comedy film directed by Jacob Fleck and Luise Fleck and starring Vivian Gibson, Mary Kid and Lia Eibenschütz. It was based on an operetta, by Jean Gilbert.

Her Highness Dances the Waltz may refer to:

Hans Homma (1874–1943) was an Austrian stage and film actor. He also directed a number of silent films.

Ball at the Savoy is a 1935 Austrian-Hungarian musical film directed by Steve Sekely and starring Gitta Alpar, Hans Jaray and Rosy Barsony. Part of the tradition of operetta films, it is based on the 1932 work of the same title by Paul Abraham. It was remade the following year in Britain.

Max Wallner (1891-1951) was a German operetta librettist and screenwriter.