Charles Bathurst, 1st Viscount Bledisloe gifted the site where the Treaty of Waitangi was signed to the nation in 1932. The subsequent administration through the Waitangi Trust is sometimes seen as the beginning of formal heritage protection in New Zealand. Public discussion about heritage protection occurred in 1940 in conjunction with the centenary of the signing of the Treaty of Waitangi. The purchase of Pompallier House in 1943 by the government further raised the issue of how historic buildings should be cared for. [2]

Duncan Rae, the MP representing the Parnell electorate, suggested that a heritage organisation should be set up and put in a private member's bill. Whilst this did not proceed, the First National Government of New Zealand (of which he was a member) took responsibility of the issue and the Historic Places Act 1954 was passed, which established the National Historic Places Trust as a non-governmental organisation (NGO). The trust was governed by a 12-member board plus a chairman, and they first met in 1955. The National Historic Places Trust came under the responsibility of the Minister of Internal Affairs. The composition of the board was defined in the legislation and the board was appointed on the recommendation of the minister. The name of the organisation was changed to New Zealand Historic Places Trust in 1963. [3]

Early work undertaken by the trust included the recording of Māori rock paintings, as some sites were to be submerged, e.g. through the Waipapa Dam and Benmore Dam. In 1961, the trust bought Te Waimate mission, the second-oldest building in New Zealand. In Akaroa, the trust enabled the Akaroa County Council via a significant grant to buy the Eteveneaux cottage, which serves as a link to Akaroa's French past. [4] [5] [6]

It is governed by a board, appointed by the Minister for Arts, Culture and Heritage and currently chaired by Hon. Marian Hobbs, and a Māori Heritage Council, currently chaired by Sir John Clarke. Past chairs include Dame Anne Salmond. The head office is in Antrim House, Wellington, while regional and area offices are in Kerikeri, Auckland, Tauranga, Wellington, Christchurch and Dunedin.

Buildings owned by Heritage New Zealand include the Kerikeri Mission House, the Stone Store, and the Te Waimate Mission house.

The historic places are organised in two categories:

The Māori Heritage Council (MHC) sits within Heritage New Zealand Pouhere Taonga and was established by the Historic Places Act 1993. The functions of the Council [11] include: 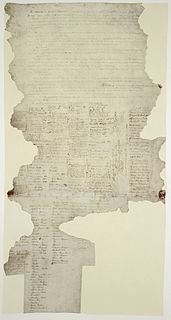 The Treaty of Waitangi is a treaty first signed on 6 February 1840 by representatives of the British Crown and Māori chiefs (rangatira) from the North Island of New Zealand. It has become a document of central importance to the history, to the political constitution of the state, and to the national mythos of New Zealand, and has played a major role in framing the political relations between New Zealand's government and the Māori population, especially from the late 20th century.

The Mission House at Kerikeri in New Zealand was completed in 1822 as part of the Kerikeri Mission Station by the Church Missionary Society, and is New Zealand’s oldest surviving building. It is sometimes known as Kemp House.

The Stone Store at Kerikeri in the Bay of Islands is New Zealand’s oldest surviving stone building.

Waimate North is a small settlement in Northland, New Zealand. It is situated between Kerikeri and Lake Omapere, west of the Bay of Islands.

The law of New Zealand uses the English common law system, inherited from being a part of the British Empire.

James Shepherd (1796–1882) was an Australian-born Wesleyan Christian missionary and settler in Northland, New Zealand. He was prominent in the early European community of the Bay of Islands, involved in construction of the Stone Store in Kerikeri, and involved in drafting of the first written Maori publications.

Arthur's Stone, located near Kerikeri, is recognised as New Zealand's earliest monument to a Pākehā (European). It was erected in November 1840, by Reverend Richard Taylor in memory of his 10-year-old son Arthur who died at the site as a result of a fall from a horse. The stone was entered into the Heritage New Zealand list of historic places on 14 May 2008, as a Category 1 List No:7743.

Piripi Kingi Karawai Patiki was a teacher and missionary, who was blind. Of Māori descent, he was a rangatira (chief) of the Ngāpuhi iwi (tribe). He was born near Titoki in the Mangakahia Valley, Northland, New Zealand. Sir William Martin, the first chief justice of New Zealand, said of Piripi Patiki that he resembled the well-known bust of Socrates.

Takapūneke, with the location also known as Red House Bay, is a former kāinga—an unfortified Māori village—adjacent to present-day Akaroa, New Zealand. Takapūneke was a major trading post for the local iwi (tribe), Ngāi Tahu, as there was safe anchorage for European vessels. The site is of significance to Ngāi Tahu as their tribal chief, Tama-i-hara-nui, was captured here by North Island Ngāti Toa chief Te Rauparaha, and then tortured and killed. The village itself was raided and subject of a massacre, with the events subsequently called the Elizabeth affair. There is a direct link from the massacre in 1830 to the signing of the Treaty of Waitangi in 1840, giving the site a status of national significance.