Born in Hattem, Netherlands, on 21 October 1762, Daendels was the son of Burchard Johan Daendels, the mayoral secretary, and Josina Christina Tulleken. He studied law at the University of Harderwijk, acquiring his doctorate on 10 April 1783.

In 1785, he sided with the Patriots, who had seized power in several Dutch cities. In 1786 he defended the city of Hattem against stadholderian troops. In 1787, he defended Amsterdam against the Prussian army that invaded the Netherlands to restore William V of Orange. After William V was in power again, he fled to France because of a death sentence. Daendels was a close witness to the French revolution.

He returned to the Netherlands in 1794, as a general in the French revolutionary army of general Charles Pichegru and commander of the Batavian Legion. Daendels helped unitarian politician Pieter Vreede to power in a coup d'état on 25 January 1798. The group behind Vreede was dissatisfied with the conservative-moderate majority in parliament, which tried to prevent the formulation of a more democratic, centralistic constitution. The reign of Vreede did not bring the expected results, however, and Daendels supported another coup d'état against Vreede on 14 June 1798. In the Batavian Republic Daendels occupied several political offices, but he had to step down when he failed to prevent the Anglo-Russian invasion of Holland in 1799, and he became a farmer in Heerde, Gelderland.

Governor-General of the Dutch East Indies

Louis Bonaparte made Daendels colonel-general in 1806 and Governor-General of the Dutch East Indies in 1807. After a long voyage, he arrived in the city of Batavia (now Jakarta) on 5 January 1808 and relieved the former Governor General, Albertus Henricus Wiese. His primary task was to rid the island of Java of the British Army.

He built new hospitals and military barracks, a new arms factories in Surabaya and Semarang, and a new military college in Batavia. He demolished the Castle in Batavia and replaced it with a new fort at Meester Cornelis (Jatinegara), and built Fort Lodewijk (Fort Ludwig) in Surabaya. He also moved the central government from Old Batavia to Weltevreden, with a palace built in Paradeplaats. However, his best-known achievement was the construction of the Great Post Road (Indonesian : Jalan Raya Pos) across northern Java from Anyer to Panarukan. The road now serves as the main road in the island of Java, called Jalur Pantura. The thousand-kilometre road was completed in only one year, during which thousands of Javanese forced labourers died. [2]

He displayed a firm attitude towards the Javanese rulers, with the result that the rulers were willing to work with the British against the Dutch. He also subjected the population of Java to forced labour (Rodi). There were some rebellious actions against this, such as those in Cadas Pangeran, West Java.

There is considerable debate as to whether he increased the efficiency of the local bureaucracy and reduced corruption, although he certainly enriched himself during this period.[ citation needed ]

Daendels failed to stop the British Invasion of the Spice Islands in 1810 despite improving the defences.

When the Kingdom of Holland was incorporated into France in 1810, Daendels returned to Holland. He was appointed a Divisional General (Major General) and commanded the 26th Division of the Grande Armée in Napoleon's invasion of Russia.

Governor-General of the Dutch Gold Coast

After the fall of Napoleon, king Willem I and the new Dutch government feared that Daendels could become an influential and powerful opposition leader and effectively banned him from the Netherlands by appointing him Governor-General of the Dutch Gold Coast (now part of Ghana). In the aftermath of the abolition of the Atlantic slave trade, Daendels tried to redevelop the rather dilapidated Dutch possessions as an African plantation colony driven by legitimate trade. Drawing on his experience from the East Indies, he came up with some very ambitious infrastructural projects, including a comprehensive road system, with a main road connecting Elmina and Kumasi in Ashanti. The Dutch government gave him a free hand and a substantial budget to implement his plans. At the same time, however, Daendels regarded his governorship as an opportunity to establish a private business monopoly in the Dutch Gold Coast.

In 1817, the British accused Daendels of aiding and abetting the slave trade – which had by then been prohibited by both the British and the Dutch nations – from his position at the Elmina fort which was then under Dutch control. "We deem it our duty to inform you of the conduct of General Daendels who is acting independent of his Government", the British Governor of Cape Coast, John Smith, wrote to the African Committee in Parliament in London on 5 March 1817. "Portuguese vessels are furnished with canoes, and Spaniards supplied with water. The beginning of last month a large Spanish ship was four days at anchor in Elmina roads, receiving water and bartering dollars for such goods as were suited for the purchase of slaves." [3]

Eventually none of the plans came to fruition, as Daendels died of malaria in the castle of St. George d'Elmina, the Dutch seat of government, on 2 May 1818. [4] His body was interred in the central tomb at the Dutch cemetery in Elmina. He had been in the country less than two years.

The invasion of Java in 1811 was a successful British amphibious operation against the Dutch East Indian island of Java that took place between August and September 1811 during the Napoleonic Wars. Originally established as a colony of the Dutch Republic, Java remained in Dutch hands throughout the French Revolutionary and Napoleonic Wars, during which time the French invaded the Republic and established the Batavian Republic in 1795, and the Kingdom of Holland in 1806. The Kingdom of Holland was annexed to the First French Empire in 1810, and Java became a titular French colony, though it continued to be administered and defended primarily by Dutch personnel. 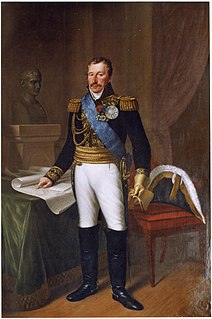 Dirk van Hogendorp was a Dutch officer and secretary of War. In 1812 he was governor of Vilnius, in 1813 he was appointed as the governor of Hamburg.

Johannes, Count van den Bosch was a Dutch officer and politician. He was Governor-General of the Dutch East Indies (1830–1833), commander of the Royal Netherlands East Indies Army, Minister of Colonies, and Minister of State. He was an officer in the Military William Order.

The Dutch Gold Coast or Dutch Guinea, officially Dutch possessions on the Coast of Guinea was a portion of contemporary Ghana that was gradually colonized by the Dutch, beginning in 1598. The colony became the most important Dutch colony in West Africa after Fort Elmina was captured from the Portuguese in 1637, but fell into disarray after the abolition of the slave trade in the early 19th century. On 6 April 1872, the Dutch Gold Coast was, in accordance with the Anglo-Dutch Treaties of 1870–71, ceremonially ceded to the United Kingdom. 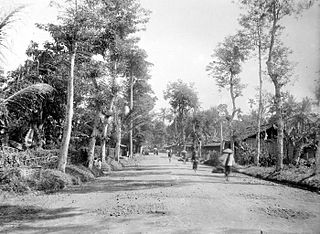 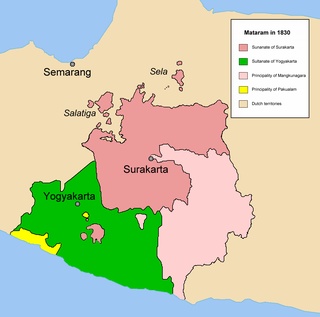 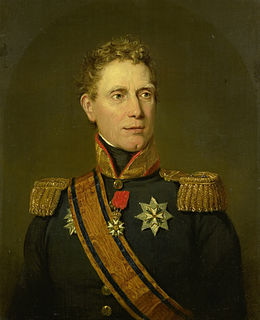 Jonkheer Jan Willem Janssens GCMWO was a Dutch nobleman, soldier and statesman who served both as the governor of the Dutch Cape Colony and governor-general of the Dutch East Indies. 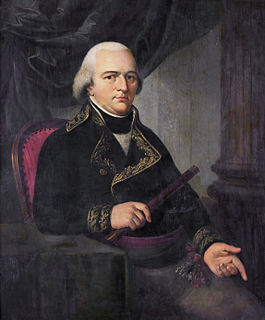 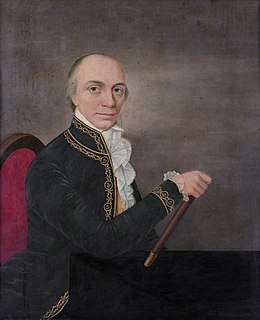 Johannes Siberg (1740–1817) was Governor-General of the Dutch East Indies from 1801 to 1805, during which time control of the Dutch Indies passed from the Dutch East India Company (VOC) to the Napoleonic Dutch State in the guise of the Batavian Republic which took over much of Dutch territory and broke their monopoly of trade. Local kings and princes took the opportunity of troubled times to try to reassert themselves. The various governments in the homeland tried various means to retrieve matters, including troop reinforcements and reforms, finally formally taking over the government functions of the VOC. Siberg resisted many of the reforms, and continued to do so after being removed from office. 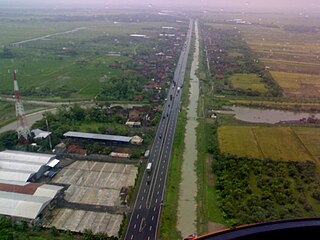 The North Coast Road, is the name for the road, 1,430 km in length, that connects Merak and Banyuwangi along the northern coast of Java, particularly between Jakarta and Surabaya. 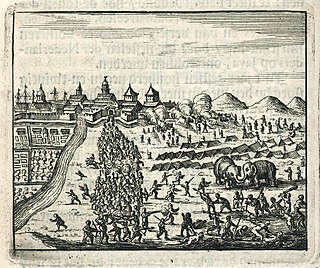 Siege of Batavia was a military campaign led by Sultan Agung of Mataram to capture the Dutch port-settlement of Batavia in Java. The first attempt was launched in 1628, and the second in 1629, both were unsuccessful. Jan Pieterszoon Coen, the Governor-General of the Dutch East Indies managed to repel the sieges and beat off all of Sultan Agung's attacks. 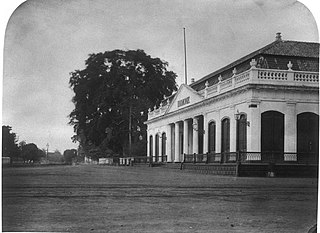 The Harmony Society was an elite social club in Batavia, Dutch East Indies. It was the oldest clubhouse in Asia when it was demolished. The construction of the group's building included the former bricks of the wall of Old Batavia. It was demolished for road widening and parking area in 1985. Activities at the club included cards and billiards. Indigenous people were excluded from the club.

Carl Julius Herman Salzwedel was a photographer in Java, Dutch East Indies during the late 19th century. He photographed people and architectural subjects. In the 1870s he partnered with Isidore van Kinsbergen at a portrait studio in Surabaya. Salzwedel then established his own successful studio in the city in 1879. Along with Charles & Van Es & Co (1884–1912) and O. Kurkdjian & Co (1888–1936), it was one of the best known photography studios in the city. 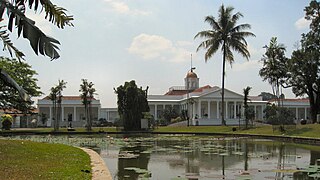 Indies Empire style is an architectural style that flourished in the colonial Dutch East Indies between the middle of the 18th century and the end of the 19th century. The style is an imitation of neoclassical Empire Style which was popular in mid-19th-century France. Conformed to the tropical setting of Indonesia, the style became known in the Dutch East Indies as Indies Empire style.

Han Chan Piet, Majoor der Chinezen, also spelt Han Tjan Piet or Han Tian Pit, was a Peranakan Chinese magnate, government official and landlord in East Java. He is best remembered for having bought the districts of Besuki and Panarukan in 1810 from the colonial government.

Han Kik Ko, Majoor der Chinezen, Regent van Probolinggo, also known as Han Tik Ko in European sources, was a Peranakan Chinese magnate, government official and landlord in East Java. He is remembered today as a pioneer of the sugar industry in East Java, and for his acquisition and despotic rule of the district of Probolinggo.

The Han family of Lasem, also called the Han family of East Java or Surabaya, was an influential family of the 'Cabang Atas' or the Chinese gentry of the Dutch East Indies. They came to power in the Indies through their alliance with the Dutch East India Company in the 18th century. Originally from Lasem in Central Java, they figured prominently in the consolidation of Dutch rule in East Java and maintained a long tradition of government service as Kapitan Cina and priyayi in the Dutch colonial brueaucracy.