Hero of Alexandria ( /ˈhɪəroʊ/ ; Greek : Ἥρων [1] ὁ Ἀλεξανδρεύς, Heron ho Alexandreus; also known as Heron of Alexandria /ˈhɛrən/ ; c. 10 AD – c. 70 AD) was a Greek mathematician and engineer who was active in his native city of Alexandria, Roman Egypt. He is often considered the greatest experimenter of antiquity [2] and his work is representative of the Hellenistic scientific tradition. [3]

Hero published a well-recognized description of a steam-powered device called an aeolipile (sometimes called a "Hero engine"). Among his most famous inventions was a windwheel, constituting the earliest instance of wind harnessing on land. [4] [5] He is said to have been a follower of the atomists. In his work Mechanics, he described pantographs. [6] Some of his ideas were derived from the works of Ctesibius.

In mathematics he is mostly remembered for Heron's formula, a way to calculate the area of a triangle using only the lengths of its sides.

Much of Hero's original writings and designs have been lost, but some of his works were preserved including in manuscripts from the Eastern Roman Empire and to a lesser extent, in Latin or Arabic translations.

Hero's ethnicity may have been either Greek [2] or Hellenized Egyptian. [7] [8] [9] [10] It is almost certain that Hero taught at the Musaeum which included the famous Library of Alexandria, because most of his writings appear as lecture notes for courses in mathematics, mechanics, physics and pneumatics. Although the field was not formalized until the twentieth century, it is thought that the work of Hero, in particular his automated devices, represented some of the first formal research into cybernetics. [11]

Hero described [12] the construction of the aeolipile (a version of which is known as Hero's engine) which was a rocket-like reaction engine and the first-recorded steam engine (although Vitruvius mentioned the aeolipile in De Architectura some 100 years earlier than Hero). It was described almost two millennia before the industrial revolution. Another engine used air from a closed chamber heated by an altar fire to displace water from a sealed vessel; the water was collected and its weight, pulling on a rope, opened temple doors. [13] Some historians have conflated the two inventions to assert that the aeolipile was capable of useful work, which is not entirely false, air containing a trace of water vapor. However, this engine is far from a pure aeolipile. [14]

Hero described a method for iteratively computing the square root of a number. [18] Today, however, his name is most closely associated with Heron's formula for finding the area of a triangle from its side lengths. He also devised a method for calculating cube roots. [19] He also designed a shortest path algorithm, that is, given two points A and B on one side of a line, find C a point on the straight line that minimizes AC+BC. "No one discovery forms the basis for 3D geometry. However Heron of Alexandria is one of the major contributors" Herons work, Metrica discusses the properties of regular polygons, circles, and conic sections, and thus opened up the exploration and understanding of the third dimension. Heron, father of 3D [20] can be attributed to him.

The most comprehensive edition of Hero's works was published in five volumes in Leipzig by the publishing house Teubner in 1903.

Works known to have been written by Hero include:

Works that sometimes have been attributed to Hero, but are now thought most likely to have been written by someone else: [24]

Works that are preserved only in fragments: 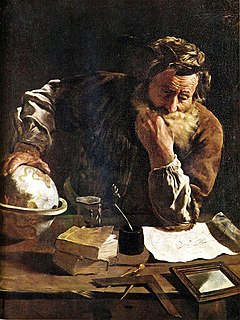 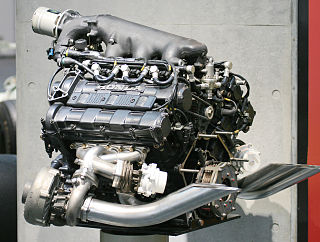 A machine is any physical system with ordered structural and functional properties. It may represent human-made or naturally occurring device molecular machine that uses power to apply forces and control movement to perform an action. Machines can be driven by animals and people, by natural forces such as wind and water, and by chemical, thermal, or electrical power, and include a system of mechanisms that shape the actuator input to achieve a specific application of output forces and movement. They can also include computers and sensors that monitor performance and plan movement, often called mechanical systems. 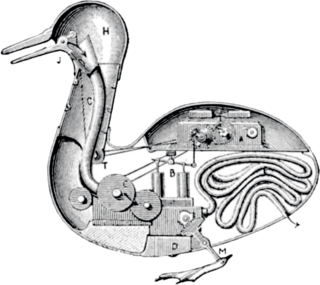 An automaton is a relatively self-operating machine, or control mechanism designed to automatically follow a predetermined sequence of operations, or respond to predetermined instructions. Some automata, such as bellstrikers in mechanical clocks, are designed to give the illusion to the casual observer that they are operating under their own power. Since long ago, the term is commonly associated with automated puppets that resemble moving humans or animals, built to impress and/or to entertain people.

In trigonometry and geometry, triangulation is the process of determining the location of a point by forming triangles to the point from known points. 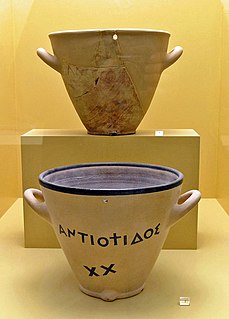 A water clock or clepsydra is any timepiece by which time is measured by the regulated flow of liquid into or out from a vessel, and where the amount is then measured. 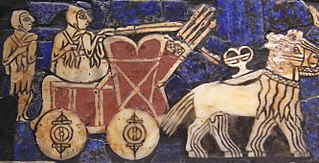 The history of technology is the history of the invention of tools and techniques and is one of the categories of world history. Technology can refer to methods ranging from as simple as stone tools to the complex genetic engineering and information technology that has emerged since the 1980s. The term technology comes from the Greek word techne, meaning art and craft, and the word logos, meaning word and speech. It was first used to describe applied arts, but it is now used to describe advancements and changes which affect the environment around us.

An aeolipile, aeolipyle, or eolipile, also known as a Hero's engine, is a simple, bladeless radial steam turbine which spins when the central water container is heated. Torque is produced by steam jets exiting the turbine. The Greco-Egyptian mathematician and engineer Hero of Alexandria described the device in the 1st century AD, and many sources give him the credit for its invention. However, Vitruvius was the first to describe this appliance in his De architectura.

Philo of Byzantium, also known as Philo Mechanicus, was a Greek engineer, physicist and writer on mechanics, who lived during the latter half of the 3rd century BC. Although he was from Byzantium he lived most of his life in Alexandria, Egypt. He was probably younger than Ctesibius, though some place him a century earlier.

Science in classical antiquity encompasses inquiries into the workings of the world or universe aimed at both practical goals as well as more abstract investigations belonging to natural philosophy. The ancient peoples who are considered today as the first scientists may have thought of themselves as natural philosophers, as practitioners of a skilled profession, or as followers of a religious tradition. Some of these figures include Hippocrates, Aristotle, Euclid, Archimedes, Hipparchus, Galen, and Ptolemy. Their works and commentaries spread throughout the Eastern, Islamic, and Latin worlds and became the wellspring of science.

During the growth of the ancient civilizations, ancient technology was the result from advances in engineering in ancient times. These advances in the history of technology stimulated societies to adopt new ways of living and governance.

Heron's fountain is a hydraulic machine invented by the 1st century AD inventor, mathematician, and physicist Heron of Alexandria.

This Timeline of heat engine technology describes how heat engines have been known since antiquity but have been made into increasingly useful devices since the 17th century as a better understanding of the processes involved was gained. They continue to be developed today.

Bennet Woodcroft FRS was an English textile manufacturer, industrial archaeologist, pioneer of marine propulsion, a leading figure in patent reform and the first clerk to the commissioners of patents. 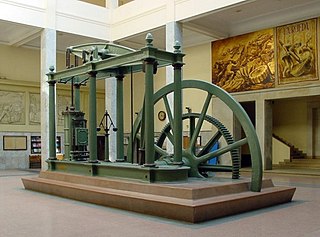 The concept of engineering has existed since ancient times as humans devised fundamental inventions such as the pulley, lever, and wheel. Each of these inventions is consistent with the modern definition of engineering, exploiting basic mechanical principles to develop useful tools and objects.

Mechanical engineering is a discipline centered around the concept of using force multipliers, moving components, and machines. It utilizes knowledge of mathematics, physics, materials sciences, and engineering technologies. It is one of the oldest and broadest of the engineering disciplines.