The canton mainly comprises the Neretva river valley area and parts of Herzegovina west of Mostar, its administrative center. It is one of the 4 cantons in the country with a Croatian majority (53.29%), although in the case of this territory it is more ethnically divided and is considered to have a mixed population.

Before the war in Bosnia and Herzegovina, the present-day municipalities of East Mostar and Berkovići were part of Mostar and Stolac, while Ivanica was part of the municipality of Trebinje.

The history of today's Herzegovina-Neretva Canton begins on March 18, 1994, with the signing of the Washington Agreement. The canton was officially constituted on December 23, 1996 as one of the ten cantons of the Federation of Bosnia and Herzegovina. [4]

The canton is the only canton in Bosnia and Herzegovina with access to the sea via the municipality of Neum. Neum is a town of 2,000 citizens (1991 census) and the area around the city is rich with historical and archeological remains of the Illyrians, a people who lived in the Balkans for many thousands of years.

The largest city in the canton and the fifth largest city in the country is Mostar. Mostar is located on the banks of the Neretva river and is divided between Croats and Bosniaks. Mostar is known for its old bridge, Stari Most, which was constructed by the area's Ottoman rulers, who also brought Islam to the region. Bosnian Croat forces bombed and destroyed the bridge on November 8, 1993. Upon its destruction it had stood for 427 years and had become a symbol of a shared cultural heritage and "peaceful" co-existence. The bridge was reconstructed in the summer of 2004. The opening ceremony was attended by several foreign delegates including Stjepan Mesić, the President of Croatia.

Other notable cities in this canton are Čapljina, Konjic, Jablanica and Međugorje, the most significant Marian shrine in the region. Jablanica and Konjic are notable for battles which took place there during World War II and there is a large museum in Jablanica dedicated to these battles.

The canton is split into the municipalities of

Of the ten cantons comprising the Federation of Bosnia Herzegovina, Herzegovina-Neretva Canton is one of two cantons, the other being the Central Bosnia Canton, nearly equally populated by Bosniaks and Croats. In such cantons there are special legislative procedures for the protection of the constituent ethnic groups.

The Herzegovina-Neretva Canton has its own legislative, executive and judicial powers. Like each of the cantons of FBiH, it has its own constitution, assembly, government, symbols and has a number of exclusive competences (police, education, use of natural resources, spatial and housing policy, culture), while some competences are divided. between cantonal and federal authorities (health, social protection, transport).

The citizens of the canton of Herzegovina-Neretva vote for a total of 30 representatives in the Cantonal Assembly every four years in general elections. Based on the results of the 2014 general elections, the current HNK government is formed by a coalition between the Party of Democratic Action (SDA) and the Croatian Democratic Union of Bosnia and Herzegovina (HDZ BiH). [6]

At the local level, citizens of Herzegovina-Neretva Canton vote every four years in municipal elections for local government in two cities and seven other municipalities.

The strongest industries by number of employees in Herzegovina-Neretva Canton (as of August 2017) are wholesale and retail trade, manufacturing, and hotels and restaurants. The economic headquarters of the canton is its capital, Mostar. [7]

After the tertiary sector, the manufacturing sector is the strongest sector of the economy of the Herzegovina-Neretva Canton. The strongest branches of this sector are the processing industry and electricity production.

The canton of Herzegovina-Neretva, with its nature parks and numerous natural beauties, has great tourism potential. According to the Federal Statistical Office, in 2014 the canton was visited by 104,006 foreign tourists and 208,647 overnight stays were made. The biggest tourist attractions in the region are the old town of Mostar, Blagaj near Mostar, Medjugorje and Neum (Bosnia and Herzegovina's only outlet to the sea). [8]

The following main roads and highways pass through the canton of Herzegovina-Neretva:

The total length of roads in the canton of Herzegovina-Neretva is 362.68 kilometers. [9]

The Ploče-Sarajevo railroad passes through the Herzegovina-Neretva Canton, to which Konjic, Mostar, Jablanica and Čapljina are connected. The length of the railroad in the region is 126.2 kilometers, while the total number of railway stations and stops is 28, three of which are connected to the high-speed rail network.

Mostar International Airport (OMO) is the third busiest airport in Bosnia and Herzegovina after Sarajevo and Tuzla airports, with a total of 53,618 passengers (2016). [10] 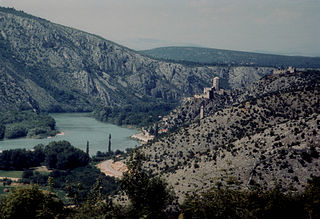 The Neretva which is known as the Narenta, is one of the largest rivers of the eastern part of the Adriatic basin. Four HE power-plants with large dams provide flood protection, power and water storage. It is recognized for its natural environment and diversity of its landscape. 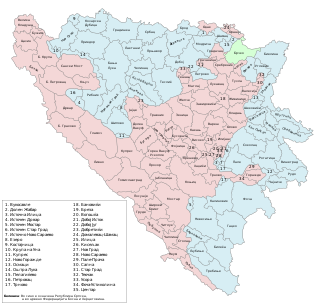 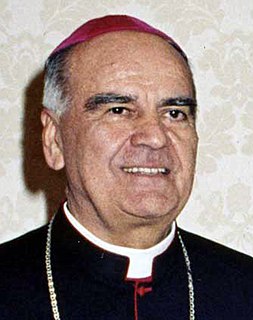 Ratko Perić is a prelate of the Catholic Church who served as the bishop of Mostar-Duvno and apostolic administrator of Trebinje-Mrkan from 1993 until his retirement in 2020. After his retirement in July 2020, he briefly served as the apostolic administrator of the both dioceses until the installment of his successor Petar Palić in September 2020.

Jablaničko lake is a large artificially formed lake on the Neretva river, right below Konjic where the Neretva expands into a wide valley. The river provided lot of fertile, agricultural land there, before the lake flooded most of it. The lake was created in 1953 after construction of Jablanica Dam near Jablanica in central Bosnia and Herzegovina.

Operation Neretva '93 was an Army of the Republic of Bosnia and Herzegovina (ARBiH) operation against the Croatian Defence Council (HVO) in September 1993 on a 200 km long front from Gornji Vakuf to south of Mostar, one of its largest of the year, during the Croat–Bosniak War. The ARBiH made limited gains in the area of northern Herzegovina and around Mostar, but did not achieve a breakthrough to the southern Neretva, where the HVO retained control. The operation was halted in October. During the operation, dozens of Croat civilians were killed in the Grabovica and Uzdol massacres. 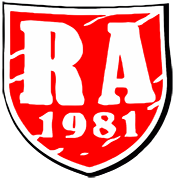 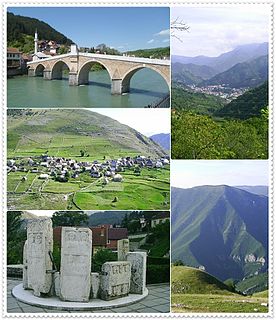 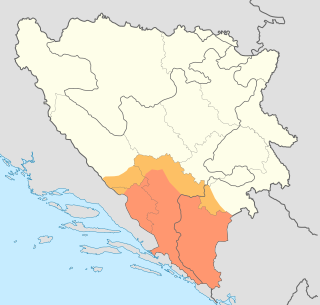 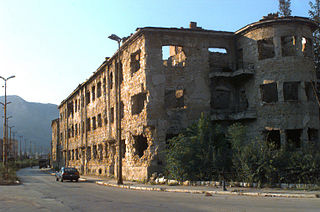 The siege of Mostar was fought during the Bosnian War first in 1992 and then again later in 1993 to 1994. Initially lasting between April 1992 and June 1992, it involved the Croatian Defence Council (HVO) and the Army of the Republic of Bosnia and Herzegovina (ARBiH) fighting against the Serb-dominated Yugoslav People's Army (JNA) after Bosnia and Herzegovina declared its independence from Yugoslavia. That phase ended in June 1992 after the success of Operation Jackal, launched by the Croatian Army (HV) and HVO. As a result of the first siege around 90,000 residents of Mostar fled and numerous religious buildings, cultural institutions, and bridges were damaged or destroyed.

Operation Jackal, also known as Operation June Dawns, was an offensive of the Bosnian War fought between a combined Croatian Army (HV) and Croatian Defence Council (HVO) army against the Army of Republika Srpska (VRS) from 7–26 June 1992. The offensive was a Croatian pre-emptive strike against the VRS, a Bosnian Serb military formed in May 1992 from Yugoslav People's Army (JNA) units that were stationed in Bosnia and Herzegovina. The HV concluded that the JNA offensive operations of April and May 1992, resulting in the capture of Kupres and much of the Neretva River valley south of Mostar, were aimed at capturing or threatening the Croatian Port of Ploče and possibly Split. To counter this threat, the Croatian leadership deployed the HV, under the command of General Janko Bobetko, to the "Southern Front" including the area in which Operation Jackal was to be conducted.

The Sarajevo–Ploče railway is a 194-kilometre (121-mile) long railway in Bosnia and Herzegovina and Croatia. The line connects Sarajevo with Konjic, Mostar and Ploče. The route operates through the regions of Sarajevo Canton, Herzegovina-Neretva Canton and Dubrovnik-Neretva County. The route largely follows the route of the Neretva river. Passenger services along the full length of line have now been discontinued, running only between Sarajevo and the town of Čapljina on the Bosnian-Croatian border as of January 2015.

Radio Herceg-Bosne is a public radio station, broadcasting from city of Mostar.