Hey! Spring of Trivia is the name given by Spike TV to the show The Fountain of Trivia (Japanese: トリビアの泉, Hepburn: Toribia no Izumi), a Japanese comedy game show on Fuji TV.

Trivia consists of a series of video segments that introduce and confirm the validity of unusual trivia. Past trivia has included exploding erasers, spiders affected by caffeine, and insects that cannot be killed. Most of the trivia on the show is sent in by viewers. A celebrity panel of five judges (ten in special episodes) evaluate each video segment and votes on how interesting it is by pushing a "hey!"-button (へぇ~ボタン, Hē-botan) every time they are astonished. ("Hey" (へぇ, Hē) is the Japanese interjection for expressing genuine surprise, equivalent to a mix of the English interjections "Really?" and "Wow!".) The total of all "Hey"s collected during the presentation of the trivia (maximum of 20 per judge) is then used as the indicator for the degree of surprise of this trivia. For every "Hey" a piece of trivia gets, the trivia submitter receives 100 yen. Should it receive a perfect score of 100 Heys (200 in special episodes), the trivia submitter receives 100,000 yen (200,000 in special episodes). To date no piece of trivia has received 100 Heys.

At some point in the show, there is a segment called "Seed of Trivia" (トリビアの種, Toribia-no-tane). Viewers submit hypothetical questions intended to produce answers in the form of new trivia; "Trivia" then "go[es] to great lengths to answer them." Tamori (referred to as "Chairman Tamori" in the English dubbed version) evaluates the Seed of Trivia by pulling a lever. The Seed of Trivia's grade is shown as a flower. "Full bloom" (満開, Mankai) is the highest of grades. Past examples of "Seed of Trivia" segments have included the fastest Japanese baseball mascots, the brand of ramen containing the greatest net noodle length per package, and which form of barbecue lions prefer most.

As of 2005, there is a new segment called "Bog of Falsiva" (ガセビアの沼, Gasebia no Numa). This is where they take a trivia sent in by a viewer that turned out to be false and sink it in a sort of bog. Additionally, they say, "If you use this trivia, you might be called," and then they always show a cute girl (Tamaki Ogawa) doing some date-like activity and saying, "Liar" (うそつき, usotsuki) at the end of the segment.

At the end of the show, host Norito Yashima gives out "The Golden Brain" (金の脳, Kin-no-nō), a brain shaped trophy that has a melon bread inside that is in the shape of a brain, to the sender of the highest rated trivia. Co-host Katsumi Takahashi gives out "The Silver Brain" (銀の脳, Gin-no-nō) – a smaller version of The Golden Brain with the same shape but with no melon bread inside – to the sender of his favorite trivia (announced as "MFT - My Favorite Trivia"). In 2005, small color-appropriate banners were added to the awards, and in 2006, the awards began featuring a small analog clock.

Trivia has been running in Japan since October 7, 2002, first as a low-budget program after midnight (with initially much more obscene and sexual trivia than afterwards).[ citation needed ] Its increasing cult status (the show obtained viewership ratings just above 5%) made Fuji TV shift the broadcast time to prime time July 2, 2003.[ citation needed ]

On November 4, 2004 Fuji TV announced that twenty six episodes of Trivia would be adapted for broadcast in the United States on the cable network Spike TV (now Paramount Network). [1] The network began airing the slightly edited English dubbed version of the show on November 11, [1] with the broadcast ending in May 2005. The editing included the removal of certain culturally specific trivia pieces such as those referring to Japanese history and actors. The shorter run time was made up for by adding trivia pieces from other episodes. Unlike Spike TV's other Japanese show MXC , the English dialogue was mostly based on the original Japanese utterances and texts, although it was often exaggerated in a comical manner. Spike had planned to produce an American version of the show premiering in Spring 2005, [2] but that version never materialized and the network decided against ordering more episodes of the English dub.[ citation needed ]

JOCX-DTV, branded as Fuji TV and colloquially known as CX, is a Japanese television station based in Odaiba, Minato, Tokyo, Japan. Owned and operated by the Fuji Television Network, Inc., it is the flagship station of the Fuji News Network (FNN) and the Fuji Network System. It is also known for its long-time slogan, "If it's not fun, it's not TV!"

Bayside Shakedown is a Japanese police comedy-drama television series originally broadcast by the Fuji Television group in 1997. The series was developed by Ryoichi Kimizuka and stars Yūji Oda, Toshirō Yanagiba, Eri Fukatsu, Chosuke Ikariya, Miki Mizuno, and Yūsuke Santamaria. In 1998 and 1999, an English-subtitled version of the series was broadcast in the United States on the International Channel, under the title The Spirited Criminal Investigative Network.

V6 is a six-member Japanese boy band formed by Johnny & Associates. The group debuted on November 1, 1995 with the single "Music for the People", which was used as the image song for the World Cup of Volleyball in 1995. Their first four singles, including "Music for the People", were all cover versions of the same-titled Eurobeat songs composed by Italian producers such as Giancarlo Pasquini, Andrea Leonardi, Alberto Contini, Sandro Oliva.

Norito Yashima is a Japanese stage actor who has been featured in movies, television shows, and specials. He eventually landed his first hosting job on the Fuji TV series Hey! Spring of Trivia, a show he co-hosted with fellow actor Katsumi Takahashi. He also has loaned his voice to a few anime, such as Iwanbo in Rurouni Kenshin.

Kazuyoshi Morita, known by his stage name Tamori (タモリ), is a Japanese television celebrity. Known for his trademark dark sunglasses, Tamori is one of the "big three" television comedians in Japan along with Takeshi Kitano and Sanma Akashiya. For more than 30 years he hosted Waratte Iitomo!, a nationally televised live show broadcast every weekday at noon from October 1982 until March 2014. His likeness is the basis for the Piranha Plant in All Night Nippon Super Mario Bros. 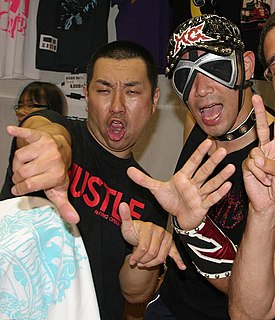 Tales of Little Women, also simply known as Little Women, is a Japanese animated television series adaptation of Louisa May Alcott's 1868-69 two-volume novel Little Women, produced by Nippon Animation. It was first aired in 1987 (January–December) by the Fuji TV network.

Beauty Treatment in the Brain IQ Supplement was a Japanese game show that aired Saturday nights from 19:00-19:54 JST on Fuji TV. It consisted of mostly logic puzzles and brain teasers. Some examples of the games are: 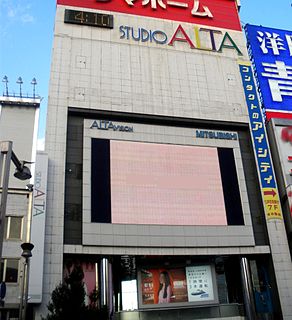 Morita Kazuyoshi Hour: Waratte Iitomo! was a Japanese variety show aired every weekday on Fuji TV. The show was hosted by Tamori and ran from 1982 to 2014. The show was produced in the Studio Alta building in Shinjuku, Tokyo. The show featured a series of regular members who only appeared on a particular day of the week. These regular members were changed periodically.

Hey! Hey! Hey! Music Champ was a Japanese music variety show on Fuji Television hosted by the comedy duo Downtown, which consists of Hitoshi Matsumoto and Masatoshi Hamada. It is a very popular show with comical hosts who like to pick on their guests. An episode usually consists of live performances from popular artists, chat segments and other fun and games.

Sponge is a South Korean TV variety show that debuted on 8 November 2003 on KBS2. The show claims to be "infotainment," and revolves around presenting various pieces of trivia in an entertaining fashion. The pieces of trivia are often sent in by viewers who wish to broadcast some piece of little known information they have. Sponge ended in November 2007 because of low TV ratings and continued as Sponge 2.0 in a new format.

Gachapin (ガチャピン) is a popular Japanese television character who appeared in the children's program Hirake! Ponkikki and its succeeding series, Ponkickies on Fuji TV. He is a green, bucktoothed dinosaur and is usually accompanied by his friend Mukku, a red Yeti.

Bunny Drop is a Japanese josei manga series by Yumi Unita. The plot follows thirty-year-old Daikichi as he becomes the guardian of Rin, the illegitimate six-year-old daughter of his grandfather.

Kenichirō "Ken" Mogi is a Japanese scientist. He is a senior researcher at Sony Computer Science Laboratories and a visiting professor at the Tokyo Institute of Technology. According to the profile posted at his personal blog, his mission is "to solve the so-called mind-brain problem."

One Piece is a Japanese anime television series adapted from the manga of the same name by Eiichiro Oda. The story follows the adventures of Monkey D. Luffy, a boy whose body gained the properties of rubber after unintentionally eating a Devil Fruit. With his crew of pirates, named the Straw Hat Pirates, Luffy explores the Grand Line in search of the world's ultimate treasure known as "One Piece" in order to become the next Pirate King. 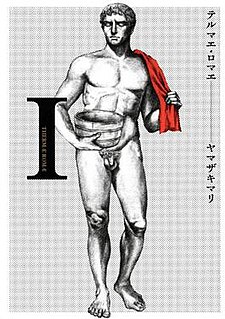 Thermae Romae, styled as Thermæ Romæ, is a Japanese manga series by Mari Yamazaki. It won the third Manga Taishō and the Short Story Award at the 14th Tezuka Osamu Cultural Prize. The manga has been licensed in North America by Yen Press. Fuji TV produced a live-action film adaptation and released on April 28, 2012. A second film, Thermae Romae II, was released in 2014. An anime television adaptation by DLE Inc. aired in Japan on Fuji TV's Noitamina block in January 2012. The show has been licensed by Discotek Media in North America, and by Siren Visual in Australia.

The third season of the Naruto anime series, titled "3rd Stage" in Japan, is directed by Hayato Date, and produced by Studio Pierrot and TV Tokyo. Based on Masashi Kishimoto's manga series, the season follows Sasuke Uchiha joining up with Orochimaru after Tsunade becomes the Fifth Hokage.