Hideki Fujisawa (藤沢 秀樹, Fujisawa Hideki) (born October 12, 1963) is a Japanese musician, better known by the stage name Dance Man (ダンス☆マン, Dansu Man). Dance☆Man calls himself an alien from "Mirror Ball Planet". He is always seen wearing a huge afro wig and sideburns, matched with sunglasses. He is very secretive about his identity to the public, and does not release any personal information in his CDs or his official website.

Fujisawa went to Dokkyou University, a private college in Saitama prefecture, majoring in economics but eventually dropped out before he could graduate. During his stay in the university, he joined a band called JADOES. The band became official in 1986, when Kadomatsu Toshiki became their record producer. The band's drummer, Yukio Shimamura, did some roadshows with band Casiopea, inspiring Fujisawa to do some roadshows himself.

He started his own career in 1998, calling himself as a space alien from "Planet Mirrorball". He re-arranged famous American/British dance songs from the 70's and 80's, often replacing the lyrics with humorous lines. One of them was Carl Carlton's song "She's a Bad Mama Jama (She's Built, She's Stacked)" He made his own cover version of the song, renamed it to "Se no Takai Yatsu wa Jama", and released it on March 18 under Avex Trax.

In 1999, he began a career in arranging and re-arranging songs written by Japanese composers. He started his career as an arranger to Morning Musume's 7th single, "Love Machine." The single was a success and his name became known in the music industry.

When the millennium came, Fujisawa again arranged another song for the group Morning Musume. "Koi no Dance Site" was the group's 8th single and won an award from 42nd Japanese Japan Record Grand Prix, along with Hiromi Gō's "Nakatta Koto ni Shite." On the same year, Hiromi Gō invited Fujisawa as a guest in his performance at Kōhaku Uta Gassen.

He continued performing and recording songs with a band he called The Bandman, consisted of 8 musicians and back-up vocalists. He is currently working with Konami, writing and arranging songs for the popular video game Beatmania.

His single "Afro Gunsō" became the first ending theme of the anime series Sgt. Frog . He also appeared on the show as a fictional version of himself. 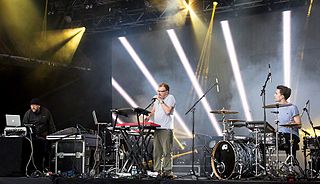 Leftfield are a British electronic duo formed in 1989. They began as the duo of Neil Barnes and Paul Daley. In January 2010 Barnes resurrected Leftfield without Daley and, after touring for a few years, finished writing new material for a third album titled Alternative Light Source. Daley declined to be involved and is focusing upon his solo career. 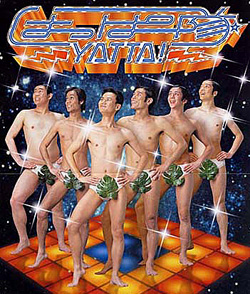 "Yatta!" is a 2001 parody song by the fictional Japanese boy band Green Leaves. The song title, yatta, is the past tense of the Japanese verb yaru, an exclamation meaning "It's done!", "I did it!", "Ready!" or "All right!" The song and video have been used as a web culture in-joke on many different websites. 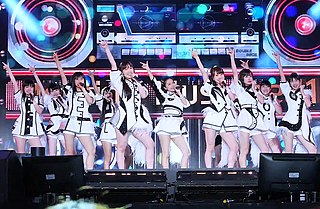 Morning Musume '21, formerly simply Morning Musume and colloquially referred to as Momusu, are a Japanese girl group, holding the second highest overall single sales on the Oricon charts as of February 2012, with the Oricon record of most top ten singles with an amount of 64, and they have sold over 21 million copies in Japan alone. 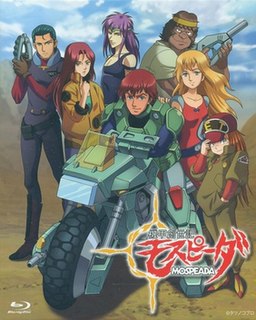 Genesis Climber MOSPEADA is an anime science fiction series created by Shinji Aramaki and Hideki Kakinuma. The 25-episode television series ran from late 1983 to early 1984 in Japan. MOSPEADA stands for Military Operation Soldier Protection Emergency Aviation Dive Armor, one of the transformable motorcycle-armors the series features. The other primary mecha featured in the show is the three-form transformable fighter called the Armo-Fighter AFC-01 Legioss. MOSPEADA was adapted as the third generation of the American series Robotech, much like Macross and Southern Cross.

BeForU were a Japanese pop group that performed music primarily for the Bemani series of rhythm games. BeForU debuted in 2000 with their song "Dive", which was notable as being the first Japanese pop song in the Dance Dance Revolution series. BeForU was produced by Naoki Maeda, one of the lead Konami musical producers. In 2006, the group made their major label debut under Avex Trax.

Kaori Iida is a Japanese pop singer and actress, associated with Hello! Project and best known as a founding member of the girl band Morning Musume. She has also recorded with the Morning Musume side project band Tanpopo and is currently a solo artist. During her time in the group, she was the tallest member (168 cm), earning her the nickname "Kaorin" & "Kao-tan". She is currently a member of Dream Morning Musume.

Country Musume was a Japanese female idol music group that is a part of Hello! Project.

Mitsuo Terada, known by his stage name Tsunku, is a Japanese record producer, songwriter, and vocalist. He is known for being very prolific. Total sales of the singles he has written exceed 37.9 million copies, making him the fifth best-selling lyricist in Japan.

"Blue " is a song by Italian music group Eiffel 65. It was first released on 7 October 1998 in Italy by Bliss Corporation and became internationally successful the following year. It is the lead single of their debut album Europop. The song is the group's most popular single, reaching number one in many countries' music charts, such as Ireland, the United Kingdom, the Netherlands, France, Sweden, Switzerland, Spain, Portugal, Canada, the United Arab Emirates, Russia, New Zealand, Israel, Lebanon, Finland, Norway, Belgium, Australia, Austria, Greece, Germany, and Hungary, as well as reaching number six on the Billboard Hot 100 in the United States in January 2000. 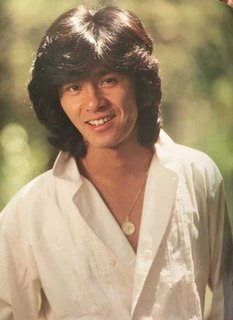 Hideki Saijō was a Japanese singer and television celebrity most famous for singing the Japanese version of the Village People's hit song "Y.M.C.A.", called "Young Man". In the 1970s, he was called "New Big Three" with Goro Noguchi and Hiromi Go. Although the original version was camp, Saijō's version was intended to seriously inspire "young men". 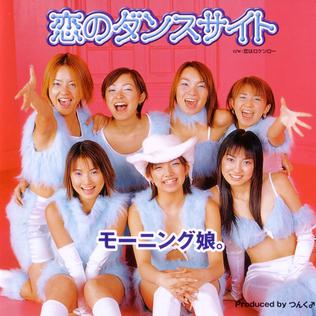 "Koi no Dance Site" is the eighth single of the J-pop idol group Morning Musume, released on January 26, 2000 as an 8 cm CD. It sold a total of 1,229,970 copies making it their second highest selling single and a number-two hit on the Oricon Charts. In 2004, it was re-released as part of the Early Single Box and again in 2005 as a 12 cm CD. The song also makes an appearance in the Japanese Nintendo DS game Osu! Tatakae! Ouendan. 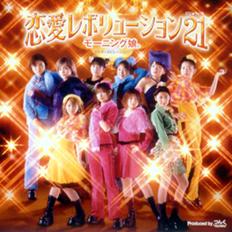 "Ren'ai Revolution 21" is Morning Musume's 11th single, and was released December 13, 2000. It sold a total of 986,040 copies and peaked at number two on the Oricon Charts. The lead vocals of this single are Natsumi Abe and Maki Goto. This single also marks the last with Yuko Nakazawa before she graduated from Morning Musume to pursue her solo career within the Hello! Project. The dance appeared in the PV and their live performance was choreographed by Natsu Mayumi. 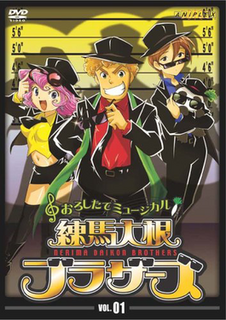 Beast Wars II: Super Life-Form Transformers is a 1998 Japanese Transformers anime series, spawning a movie and a toyline. It was broadcast on TV Tokyo from April 1998 to January 1999, and was the first Transformers anime to be produced by Nihon Ad Systems and animated by the studio Ashi Productions. The series was preceded by Beast Wars: Transformers, and was followed by Super Life-Form Transformers: Beast Wars Neo. The series has a much lighter tone and is aimed more towards children, whereas the more accessible Beast Wars was intended for a wider age range. The anime uses conventional animation rather than the CGI of its predecessor. With the exception of the faction leaders, all of the characters within the toyline are either remolds, reissues, or recolors of earlier Beast Wars or Generation 2/Machine Wars toys. 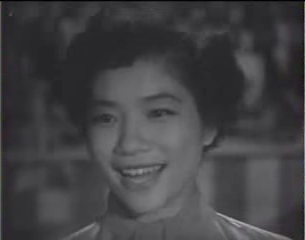 Chiemi Eri, was a Japanese popular singer and actress. 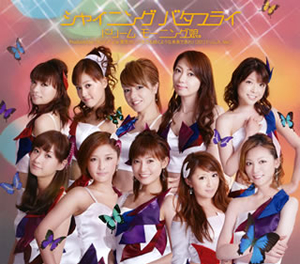 "Shining Butterfly" is the first single by the Japanese female pop group Dream Morning Musume, released in Japan on February 15, 2012 on the Zetima label. 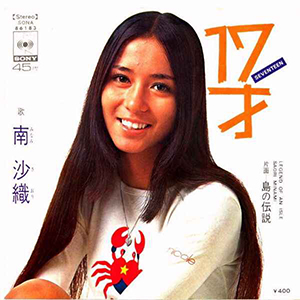 "17-sai" is the debut single by Japanese singer Saori Minami. Written by Mieko Arima and Kyōhei Tsutsumi, the single was released by CBS Sony on June 1, 1971. Tsutsumi based the song on "Rose Garden" by Lynn Anderson when he learned it was Minami's favorite song. Arima, who was 40 years old at the time, surprised her close friends when she was able to express the feelings of a 17-year-old girl in the song's lyrics.