The first television series, Chō Tokkyū Hikarian (超特急ヒカリアン, lit. "Super Express Hikarian"), is about a series of bullet trains that are turned into robots. The robots, along with two humans named Tetsuyuki Shinbashi (新橋 テツユキ Shinbashi Tetsuyuki) and Minayo Kanda (神田 ミナヨ Kanda Minayo), have to stop an alien invasion.

Enoki Films has licensed the series for an English release. The company has suggested name changes (e.g. Tetsuyuki becomes Terry and Minayo becomes Mina), [1] but the series is not yet[ when? ] available in English, and Enoki may sublicense the series to another company who may decide to keep the original Japanese names, use Enoki's suggested English names, or use original English names.

The main characters in Hikarian are the Hikarians who fight against the Blatcher gang and their plan operation Darkness. All of the characters, except the Black Express, are based on real life trains. The series depicts them operating as normal trains during times of peace.

In January 2011, it was announced Pat Lee would be working with Carloon Animation to create a CGI cartoon about trains called Train Hero  [ zh ] (高铁侠). [2] In July 2011, Chinese viewers of previews were shocked that it was a shot-for-shot knockoff of Hikarian. [3] [4] After Pat Lee was sued by TV Tokyo & Takara Tomy when they found out about the cartoon being a rip-off of Hikarian[ citation needed ], Pat Lee created a revised version called Train Heroes (トレインヒーロー) which began airing in Japan in April 2013. [5]

Hiroki Takahashi is a Japanese actor, voice actor and singer whose major roles include Eiji Kikumaru in The Prince of Tennis, Tobias in Pokémon anime series, Kenji Harima in School Rumble, Hisoka in Hunter × Hunter (1999), Katsuya Jonouchi in Yu-Gi-Oh! Duel Monsters and Takato Saijō in Dakaichi In video games, he provides the voice of Ryu in the newer Street Fighter games. He is married to voice actress Aiko Aihashi. Their first son was born on June 24, 2016. Rock is a recurrent major character in most of Osamu Tezuka's manga series, and he is an important part of Osamu Tezuka's Star System. As all of Tezuka's main characters he is seen repeatedly in different works but differs as the character with the most various and changing roles from both hero and antihero. He is 17 years old. 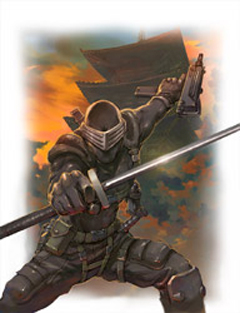 Snake Eyes is a fictional character from the G.I. Joe: A Real American Hero toyline, comic books, and animated series, created by Larry Hama. He is one of the original and most popular members of the G.I. Joe Team, and is most known for his relationships with Scarlett and Storm Shadow. Snake Eyes is one of the most prominent characters in the G.I. Joe: A Real American Hero franchise, having appeared in every series of the franchise since its inception. He is portrayed by Ray Park in the 2009 live-action film G.I. Joe: The Rise of Cobra, and the 2013 sequel G.I. Joe: Retaliation. Henry Golding portrays the titular character in the 2021 spin-off, origin film Snake Eyes.

Tiger Mask is a Japanese manga series written by Ikki Kajiwara and illustrated by Naoki Tsuji. The series was first published in Kodansha's Bokura Magazine from 1968 to 1971 and was later published in Weekly Shōnen Magazine from 1970 to 1971. It was later adapted into an anime series by Toei Animation which first aired on Yomiuri TV or TV Asahi on October 2, 1969 and ended its run on September 30, 1971, airing 105 episodes. In real life, the name has been used by a succession of Japanese professional wrestling characters as a gimmick. The Tiger Mask persona is instantly recognizable by its trademark mask, designed to look like a tiger's head, as well as the combination of high flying attacks and martial arts in the ring.

The Tobu Isesaki Line is a Japanese railway line operated by the private railway company Tobu Railway, extending from Tōbu-Dōbutsu-Kōen Station in Saitama to Isesaki Station in Gunma Prefecture. Originally, the Isesaki Line refers to the entire section between Asakusa - Isesaki and Oshiage - Hikifune, but from March 2012, the 41.0 km section south of Tōbu-Dōbutsu-Kōen was rebranded as the Tobu Skytree Line in conjunction with the opening of the Tokyo Skytree tower.

Fūma Kotarō was the name adopted by the leader of the ninja Fūma clan during the Sengoku era of feudal Japan. According to some records, his name was originally Kazama Kotarō. 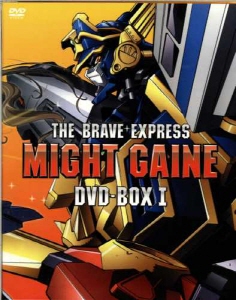 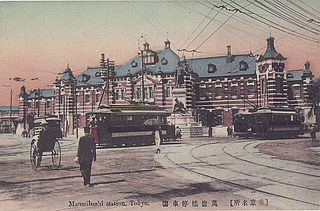 Manseibashi Station can refer to two closed railway stations all in Chiyoda, Tokyo, Japan. One was a railway station on the Japanese Government Railways Chūō Main Line and the other was a subway station in the Tokyo Subway network.

Mojacko is a shōnen manga series created by Fujiko Fujio and later Fujiko F. Fujio. It was first serialized in Kodansha's Weekly Bokura Magazine in 1969 to 1970, for 35 chapters, eventually compiled into 2 tankōbon volumes. It was then revived twice by Masahito and published in Shogakukan's CoroCoro Comic from September 1995 to April 1996, with a total of 1 volume. The manga revolves around Sorao Amano, an ordinary student who befriends two aliens stranded on their planet while helping them to get home. 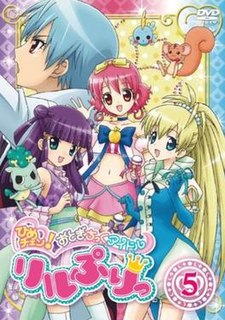 Hime Chen! Otogi Chikku Idol Lilpri, also known as Lilpri, is a Japanese shōjo anime directed by Makoto Moriwaki. It was adapted from the Sega arcade game of the same name. It was also adapted into two manga series by Mai Jinna.

Ressha Sentai ToQger is a Japanese television series, a Tokusatsu drama of the 38th installment in Toei Company's Super Sentai metaseries, following Zyuden Sentai Kyoryuger. It premiered on TV Asahi affiliates on February 16, 2014, joining Kamen Rider Gaim and later, Kamen Rider Drive in the Super Hero Time programming block, and it ended on February 15, 2015. The series has a train motif, and unlike previous series where the heroes are named after colors, the heroes in ToQger are numbered and regularly swap colors during battle. 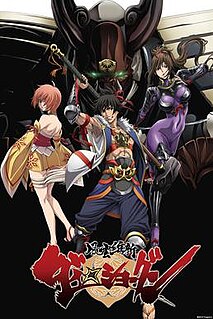 Dai-Shogun – Great Revolution is a mecha anime television series, directed by Takashi Watanabe and animated by J.C.Staff and A.C.G.T. It aired on April 9, 2014 on Tokyo MX and finished on June 26, 2014. The mecha design is by Makoto Ishiwata of Nitroplus.

Ultraman Ginga Theater Special is a Japanese kaiju, and superhero, film, serving as the film adaptation of the 2013 Ultra Series television series Ultraman Ginga. It was released on September 7, 2013, which takes place during the season break of Ultraman Ginga, in-between episodes six and seven. This movie is double-billed with short CGI movie, Mega Monster Rush: Ultra Frontier - Dino-Tank Hunting, one of the shorts for the 2013 cardass game Mega Monster Rush: Ultra Frontier, which played first before the premier of the movie. A DVD and Blu-Ray release of the movie was sold on December 25, 2013 by Bandai Visual, costing around 3,990 and 5,040 Yen respectively.

Shinkansen Henkei Robo Shinkalion is a Japanese toy franchise created by Takara Tomy, in association with the Japan Railways Group. It is a spin-off of the long-running Plarail model train franchise, with the toys first launched back at March 16, 2015. An anime adaptation by OLM, Inc. aired in all JNN stations in Japan from January 6, 2018 to June 29, 2019. A new anime titled Shinkansen Henkei Robo Shinkalion Z started airing on April 9, 2021 on TV Tokyo.

King of Prism: Pride the Hero is a 2017 Japanese animated film produced by Tatsunoko Production and Avex Pictures based on Takara Tomy's Pretty Rhythm franchise. The story focuses on side characters from the animated television series Pretty Rhythm: Rainbow Live, which aired from 2013 to 2014, and is a direct sequel to the 2016 film King of Prism by Pretty Rhythm. A sequel titled King of Prism: Shiny Seven Stars was released in 2019. 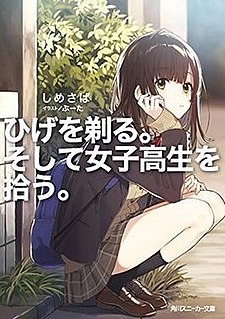 Higehiro, short for Higehiro: After Being Rejected, I Shaved and Took in a High School Runaway, is a Japanese romantic comedy light novel series written by Shimesaba and illustrated by booota. It began serialization online in March 2017 on Kadokawa's user-generated novel publishing website Kakuyomu. It was later published by Kadokawa Shoten with four volumes since February 2018 under their Kadokawa Sneaker Bunko imprint. The series ended with the release of its fifth volume on June 1, 2021. A manga adaptation with art by Imaru Adachi has been serialized in Kadokawa Shoten's shōnen manga magazine Monthly Shōnen Ace since November 2018. It has been collected in two tankōbon volumes. The manga is licensed in North America by One Peace Books. An anime television series adaptation by Project No.9 aired from April to June 2021.