The Himalayan brown bear (Ursus arctos isabellinus), also known as the Himalayan red bear, isabelline bear or Dzu-Teh, is a subspecies of the brown bear and is known from northern Afghanistan, northern Pakistan, northern India, west China and Nepal. It is the largest mammal in the region, males reaching up to 2.2 m (7 ft) long, while females are a little smaller. The bears are omnivorous and hibernate in dens during the winter. While the brown bear as a species is classified as Least Concern by the IUCN, this subspecies is highly endangered and populations are dwindling. It is Endangered in the Himalayas and Critically Endangered in Hindu Kush.

The bears are found in Nepal, Tibet, west China, north India, north Pakistan, Uzbekistan, Tajikistan, entire Kyrgyzstan and south-east Kazakhstan. [2] They are already speculated to have become extinct in Bhutan.[ citation needed ] Phylogenetic analysis has shown that the Gobi bear clusters with the Himalayan brown bear and may represent a relict population of this subspecies. [3]

The Himalayan brown bear consists of a single clade that is the sister group to all other brown bears (and polar bears). The dating of the branching event, estimated at 658,000 years ago, corresponds to the period of a Middle Pleistocene episode of glaciation on the Tibetan plateau, suggesting that during this Nyanyaxungla glaciation the lineage that would give rise to the Himalayan brown bear became isolated in a distinct refuge, leading to its divergence. [3]

The bears go into hibernation around October and emerge during April and May. Hibernation usually occurs in a den or cave made by the bear.

Himalayan brown bears are omnivores and will eat grasses, roots and other plants as well as insects and small mammals; they also like fruits and berries. They will also prey on large mammals, including sheep and goats. Adults will eat before sunrise and later during the afternoon.

International trade is prohibited by the Wildlife Protection Act in India.[ citation needed ] Snow Leopard Foundation (SLF) in Pakistan conducts research on the current status of Himalayan brown bears in the Pamir Range in Gilgit-Baltistan, a promising habitat for the bears and a wildlife corridor connecting bear populations in Pakistan to central Asia. The project also intends to investigate the conflicts humans have with the bears, while promoting tolerance for bears in the region through environmental education. SLF received funding from the Prince Bernhard Nature Fund and Alertis. [4] Unlike other brown bear subspecies, which are found in good numbers, [1] the Himalayan brown bear is critically endangered. They are poached for their fur and claws for ornamental purposes and internal organs for use in medicines. They are killed by shepherds to protect their livestock and their home is destroyed by human encroachment. In Himachal, their home is the Kugti and Tundah wildlife sanctuaries and the tribal Chamba region. Their estimated population is just 20 in Kugti and 15 in Tundah. The tree bearing the state flower of Himachal, buransh, is the favourite hangout of the bear. Due to the high value of the buransh tree, it is being commercially cut causing further destruction to the brown bear's home. [5] The Himalayan brown bear is a critically endangered species in some of its range with a population of only 150–200 in Pakistan. The populations in Pakistan are slow reproducing, small, and declining because of habitat loss, fragmentation, poaching, and bear-baiting. [4]   In India, brown bears are present in 23 protected areas in the northern states of Jammu and Kashmir, Himachal Pradesh, and Uttaranchal, but only in two of these the bears are regarded as fairly common. There are likely less than 1,000 bears, and possibly half that in India. [6]

Association with the Yeti

"Dzu-Teh," a Nepalese term, has also been associated with the legend of the Yeti, or Abominable Snowman, with which it has been sometimes confused or mistaken. During the Daily Mail Abominable Snowman Expedition of 1954, Tom Stobart encountered a "Dzu-Teh". This is recounted by Ralph Izzard, the Daily Mail correspondent on the expedition, in his book The Abominable Snowman Adventure. [7] A 2017 analysis of DNA extracted from a mummified animal purporting to represent a Yeti was shown to have been a Himalayan brown bear. [3] 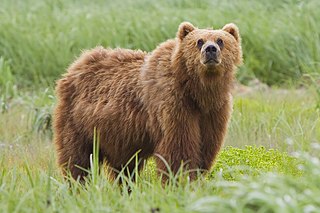 The brown bear is a large bear species found across Eurasia and North America. In North America, the populations of brown bears are called grizzly bears. It is one of the largest living terrestrial members of the order Carnivora, rivaled in size only by its closest relative, the polar bear, which is much less variable in size and slightly bigger on average. The brown bear's range includes parts of Russia, Central Asia, China, Canada, the United States, Hokkaido, Scandinavia, the Balkans, the Picos de Europa and the Carpathian region, especially Romania, Bulgaria, Iran, Anatolia and the Caucasus. The brown bear is recognized as a national and state animal in several European countries.

In Himalayan folklore, the Yeti is a monstrous creature. The entity would later come to be referred to as the Abominable Snowman in western popular culture. The names Yeti and Meh-Teh are commonly used by the people indigenous to the region, and are part of their folk beliefs. Stories of the Yeti first emerged as a facet of Western popular culture in the 19th century. The scientific community has generally regarded the Yeti as the result of a complex of intricate folk beliefs rather than a large, ape-like creature. 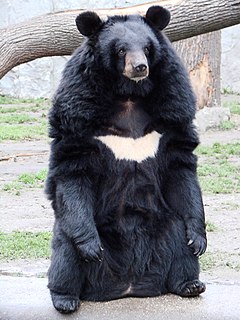 The Asian black bear, also known as the Asiatic black bear, moon bear and white-chested bear, is a medium-sized bear species native to Asia that is largely adapted to an arboreal lifestyle. It lives in the Himalayas, in the northern parts of the Indian subcontinent, the Korean Peninsula, northeastern China, the Russian Far East, the Honshū and Shikoku islands of Japan, and Taiwan. It is classified as vulnerable by the International Union for Conservation of Nature (IUCN), mostly because of deforestation and hunting for its body parts. Although largely herbivorous, Asian black bears can be very aggressive towards humans, who frequently trap or kill them for traditional medicine.

The Tibetan bear or Tibetan blue bear is a subspecies of the brown bear found in the eastern Tibetan Plateau. It is also known as the Himalayan blue bear, Himalayan snow bear, Tibetan brown bear, or the horse bear. In Tibetan, it is known as Dom gyamuk. 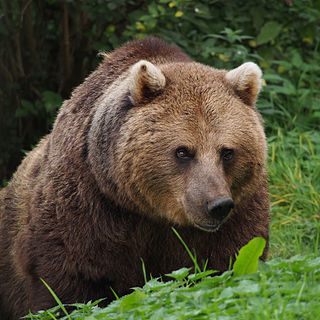 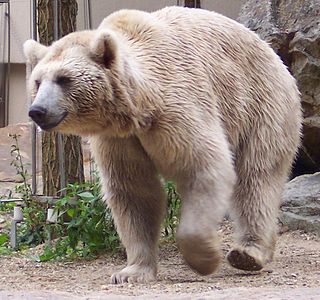 The Syrian brown bear is a relatively small subspecies of brown bear native to the Middle East.

The Himalayan marmot is a marmot species that inhabits alpine grasslands throughout the Himalayas and on the Tibetan Plateau. It is IUCN Red Listed as Least Concern because of its wide range and possibly large population. 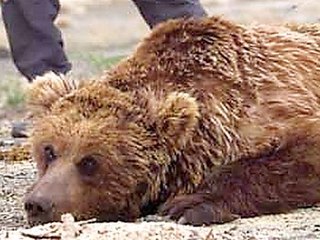 The Gobi bear (Ursus arctos gobiensis; known in Mongolian as the Mazaalai, is a subspecies of the brown bear that is found in the Gobi Desert of Mongolia. It is listed as critically endangered by the Mongolian Redbook of Endangered Species and by the Zoological Society of London. The population included only around 30 adults in 2009, and is separated by enough distance from other brown bear populations to achieve reproductive isolation. 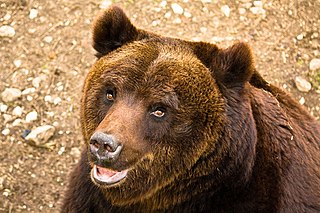 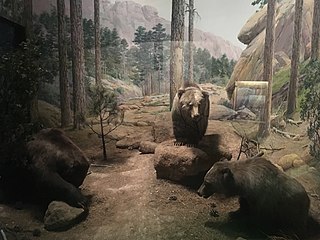 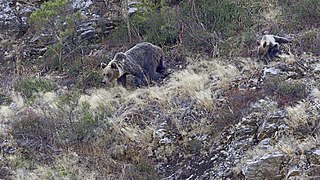 The Cantabrian brown bear or Iberian brown bear, or just Iberian bear is a population of Eurasian brown bears living in the Cantabrian Mountains of Spain. On average, females weigh 85 kg (187 lb), but can reach a weight of 150 kg (330 lb). Males average 115 kg (254 lb), though they can weigh as much as 200 kg (440 lb). The bear measures between 1.6 and 2 m in length, and between 0.90 and 1 m at shoulder height. In Spain, it is known as the Oso pardo cantábrico and, more locally, in Asturias as Osu. It is timid and will avoid human contact whenever possible. The Cantabrian brown bear can live for around 25–30 years in the wild.

The Alaska Peninsula brown bear or "peninsular grizzly" is a colloquial nomenclature for a brown bear that lives in the coastal regions of southern Alaska, although according to other sources, it is a population of the mainland grizzly bear subspecies, or the Kodiak bear subspecies. 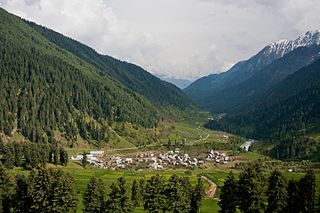 The Overa-Aru Wildlife Sanctuary is a protected area in Aru Valley near Pahalgam in Jammu and Kashmir, India. It is on the periphery of the two villages of Overa and Aru. The sanctuary spreads over 511 square kilometres (197 sq mi), lies 76 kilometres (47 mi) east of Srinagar. It was declared a game reserve in 1945 under the Dogra Rule and later upgraded to a sanctuary in 1981.

The Gulmarg Wildlife Sanctuary spread over 180 square kilometres (69 sq mi) is a protected area in Baramulla district of Jammu and Kashmir, India. The sanctuary lies on the north-eastern side of the Pir Panjal mountain range and falls under the northwest Biogeographic Zone 2A. It lies 50 kilometres (31 mi) south-west of Srinagar and 26 kilometres (16 mi) from Baramulla. The sanctuary was first declared as a game reserve in 1981 and later upgraded to a sanctuary in 1987.