A young man is called back in time to the Japanese medieval era. Here, he will have to help a young princess and her two pretty ninja bodyguards escape from the castle of an evil tyrant. 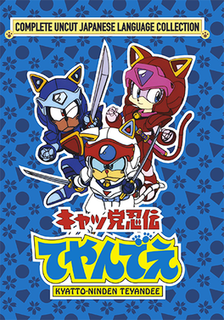 Kyatto Ninden Teyandee is an anime series produced by Tatsunoko Productions and Sotsu Agency. The series originally aired in Japan on TV Tokyo from February 1, 1990 to February 12, 1991, for a total of 54 episodes. Saban picked up the North American rights to the series in 1991, and produced an English version called Samurai Pizza Cats. The creators stated that there was going to be a spin-off series, Kyatto Keisatsu Beranmee. The series is known for its cultural humor consisting of Japanese puns, pop culture, and fourth-wall breaking.

Futaro Yamada was the pen name of Seiya Yamada, a Japanese author. He was born in Yabu, Hyogo. In 1947, he wrote a mystery short story Daruma-tōge no Jiken and was awarded a prize by the magazine Houseki (宝石). He was discovered by Edogawa Rampo and became a novelist. He wrote many ninja and mystery stories. Many of his works have been adapted for film, TV, manga, and anime.

Tournament of the Gods is a H-game by Alicesoft.

I Dream of Mimi, known as Buttobi!! CPU in Japan, is a Japanese series by Kaoru Shintani. It was produced in 1997 by Pink Pineapple studios, with some work farmed out to OLM. It was released in North America by The Right Stuf International under the name I Dream of Mimi. It is based on the 1993 manga "ぶっとび!!CPU" by Kaoru Shintani, published by Hakusensha in Young Animal and as 3 tankoban under the Jets Comics banner.

Hiiro no Kakera, is a Japanese visual novel created by Idea Factory directed at the female market, known as an otome game. Released on July 6, 2006 for the PlayStation 2, the protagonist is a teenage girl who revisits a small village she remembers from her childhood and gets caught up in her family's history and supernatural dangers surrounding it. A thirteen episode anime adaptation by Studio Deen aired in Japan between April 1, 2012 and June 24, 2012 and was licensed in North America by Sentai Filmworks. A second season, Hiiro no Kakera: Dai Ni Shō, aired between October 1, 2012 and December 23, 2012. Some characters from this property are featured in the PSP game B's LOG Party, released on May 20, 2010.

The Naruto: Ninja Council series, known in Japan as Naruto: Saikyō Ninja Daikesshū, is a series of action games based on the manga and anime series Naruto by Masashi Kishimoto. They are developed by Aspect Co. and published by Tomy. Various installments of the series have appeared on both Nintendo's Game Boy Advance and Nintendo DS, the first two games in the series available for the former while the rest are available on the latter.

Events in 1991 in Japanese television.

Softgarage is a Japanese company that produces anime, games, character goods, music, and books. Softgarage was the company that produced the GR: Giant Robo anime. Though Softgarage primarily focuses on the production of original video animation (OVAs), it has also worked on anime television series and anime film. Recently, Softgarage has also started to produce anime related goods, such as mousepads. 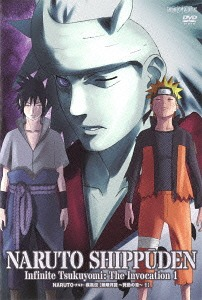 The episodes for the twentieth and penultimate season of the anime series Naruto: Shippuden are based on Part II for Masashi Kishimoto's manga series. The season focuses on Naruto Uzumaki, Sasuke Uchiha, Sakura Haruno and Kakashi Hatake attempting to defeat Madara Uchiha and Zetsu, the ones behind the activation of the Infinite Tsukuyomi. There is also a side story revolving around Itachi Uchiha's life in the Leaf Village and his early days in the Akatsuki. The episodes are directed by Hayato Date, and produced by Pierrot and TV Tokyo.

Super HxEros is a Japanese manga series written and illustrated by Ryōma Kitada. It was serialized in Shueisha's Jump Square magazine from May 2017 to February 2021, with its chapters collected into twelve tankōbon volumes. In North America, the manga is licensed by Seven Seas Entertainment. A 12-episode anime television series adaptation produced by Project No.9 aired from July to September 2020.