Hironobu Kageyama (影山 ヒロノブ, Kageyama Hironobu, real name written 景山 浩宣, born February 18, 1961) is a Japanese musician and singer prominent in the soundtracks for anime, video game and tokusatsu productions. He is sometimes called Kami (Kei) by his fans. Kageyama got his big break at age 16, as lead singer of the rock band Lazy. By the early '80s, the band split and Kageyama went solo. He found major success once he started to sing the theme songs of anime and tokusatsu shows. Becoming immensely popular soon after, Kageyama went on to be dubbed the "Prince of Anime/Tokusatsu Songs" and is a main fixture for shows to this day.

Kageyama gained notoriety for his opening songs of Hikari Sentai Maskman , Chōjin Sentai Jetman , and Dragon Ball Z . He is the original member and current leader of the anisong band JAM Project. Along with Masaaki Endoh, Kageyama hosted Anipara Ongakukan, a TV show aired on the Kids Station Channel that showed live performances of the theme songs of recent anime and tokusatsu shows. The show was canceled in 2017. [1]

Kageyama is also the voice of Zaruba, a mystical talking ring, as well as the loyal ally and advisor to the titular hero of the tokusatsu franchise Garo , for which JAM Project has performed the opening themes. 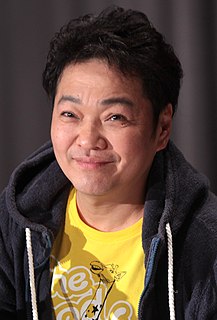 Mitsuo Yamaguchi, better known by the stage name of Kappei Yamaguchi, is a Japanese actor and voice actor affiliated with Gokū and 21st Century Fox. He currently voices Usopp in One Piece and Shinichi Kudo in Case Closed. Other roles included the male Ranma Saotome in Ranma ½, the eponymous character in InuYasha and L in Death Note. In overseas dubs, he is the Japanese voice of Kyle Broflovski, Bugs Bunny and Crash Bandicoot.

Nozomu Sasaki is a Japanese voice actor and singer. He is represented by the voice actor management firm, 81 Produce, and was previously represented by Arts Vision. In 1988, he voiced the character Tetsuo Shima in the movie Akira, which was adapted from the manga of the same name. He also provided the voice of Yusuke Urameshi in the anime adaptation of the manga YuYu Hakusho and returned to that role in video games for that franchise. He is sometimes mistaken for fellow voice actress Nozomi Sasaki, whose name is written the same way. Sasaki has emerged the victor of the Seiyū Grand Prix more times than any other voice actor.

Kōki Miyata is a Japanese voice actor who works for 81 Produce. He was formerly credited as Harunori Miyata. He made his radio CM narration debut on 2 March 1993. 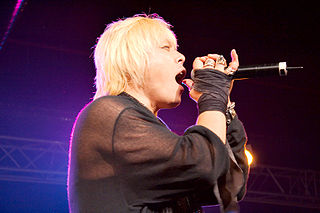 Masaaki Endoh is a Japanese singer-songwriter who is prominent in the area of soundtracks for anime and tokusatsu productions. He is one of the founders of the Anison band JAM Project and has been a regular member ever since its inception in 2000. His nickname is the "Young Lion of Anison" and he goes by the motto "Always Full Voice".

Tetsuwan Tantei Robotack is a Japanese Tokusatsu television series created and produced by Toei Company. The series is the seventeenth and final installment of the Metal Hero Series franchise and the partial sequel to B-Robo Kabutack. It premiered on March 8, 1998, the week following the finale of B-Robo Kabutack and ended on January 24, 1999. It joined Seiju Sentai Gingaman as part of the block that would ultimately become Super Hero Time in 2003. Like its predecessor, it bears some similarities with Robocon in characters and themes styles.

A local hero is a Japanese superhero who is created to represent a particular region of Japan, such as a prefecture or city. They often perform in special martial arts stage shows. Created either by local groups or the local government, a local hero is modeled after the superheroes of Japanese tokusatsu. A local hero is often themed around the city or prefecture's local mythologies or industries, are created to teach the children who watch the stage shows certain things, or are themed after the event that they are used to promote.

Project.R are a Japanese musical ensemble established by Nippon Columbia and Toei Company to perform on the soundtracks for the Super Sentai Series beginning with Engine Sentai Go-onger.

Tsutomu Kitagawa is a Japanese actor and stuntman who is mostly known for playing Godzilla for the "Millennium" series. He also played King Ghidorah for Rebirth of Mothra III. He also played the costumed actor for the Blue Ranger in many of Toei Company's Super Sentai Series in the 1980s, better known in the United States as Power Rangers. Kitagawa graduated from Sakuragaoka High School before joining Sonny Chiba's Japan Action Club in January 1975.

Hirofumi Ishigaki is a Japanese actor and action director.

Engine Sentai Go-Onger is Toei Company's thirty-second installment in the Super Sentai metaseries of Japanese tokusatsu television series. It premiered on February 17, 2008, a week following the finale of Juken Sentai Gekiranger, and ended on February 8, 2009. It aired as part of TV Asahi's 2008 Super Hero Time block alongside Kamen Rider Kiva. Its footage was used for the American series, Power Rangers RPM and was dubbed into Korean as Power Rangers Engine Force. The catchphrase for the series is "Rushing by at full-throttle mach speed, our slogan is 'go on!'".

Samurai Sentai Shinkenger is the title of Toei Company's thirty-third entry in its long-running Super Sentai metaseries of Japanese tokusatsu television series. It premiered on February 15, 2009, the week following the finale of Engine Sentai Go-onger, and ended on February 7, 2010. It joined Kamen Rider Decade as a program featured in TV Asahi's Super Hero Time programming block, and following Decade's finale, it aired alongside Kamen Rider W. It incorporates elements from the Jidaigeki drama genre and Japanese themes and aesthetics. The catchphrase for the series is "Authorized by divine providence!!".

Ressha Sentai ToQger the Movie: Galaxy Line S.O.S. is a Japanese film serving as the theatrical adaptation of the 2014 Super Sentai television series Ressha Sentai ToQger. It was released on July 19, 2014, as a double-billing with Kamen Rider Gaim: Great Soccer Battle! Golden Fruits Cup!. It features the ToQgers helping out Lady, conductor of the Galaxy Line, after she is attacked by Count Nair of the Shadow Line, portrayed by musician Hyadain. Hyadain said that as a child he enjoyed Dengeki Sentai Changeman, Choushinsei Flashman, and Hikari Sentai Maskman and hoped that he would portray the character well.

Kishiryu Sentai Ryusoulger is a Japanese tokusatsu drama and the 43rd entry of Toei's long-running Super Sentai series, succeeding Kaitou Sentai Lupinranger VS Keisatsu Sentai Patranger and following the four week special TV miniseries Super Sentai Strongest Battle. Although the series primarily aired in the Reiwa era, it is considered the final Heisei era series, since the last time an era changed, the era was based on when the show started. It is the fourth Super Sentai to utilize the motif of dinosaurs, having been preceded by Zyuden Sentai Kyoryuger, as well as the first to utilize the motif of knights.

Keito Tsuna is a Japanese actor working for Watanabe Entertainment.

Tatsuya Nōmi was a Japanese actor associated with Ohta Production. He is best known for playing Tengensei Daigo/ShishiRanger in Gosei Sentai Dairanger.

Jo Ishiwatari is a Japanese actor who is represented by the talent agency Anima.