History of the Polish Army

The Polish Army (Polish : Wojsko Polskie ) is the name applied to the military forces of Poland. The name has been in use since the early 19th century, although it can be used to refer to earlier formations as well. Polish Armed Forces consist of the Army (Wojsko Lądowe), Navy (Marynarka) and Air Force (Lotnictwo) branches and are under the command of the Ministry of National Defense (Ministerstwo Obrony Narodowej).

The first Polish Army was created in the 10th century kingdom of Poland, under the Piast dynasty. The prince's forces were composed of a group of armed men, usually mounted, named drużyna. Their key role was the protection of the monarch and supporting the taxation effort. Their organisation was similar to other such armed units of other Slavic rulers, and were often of foreign origin.

With time, the early tribal warriors gave rise to knights and eventually, by the 15th century, the whole social class of the szlachta or Polish gentry. The Polish gentry formed a distinct element within the ancient tribal groupings. This is uncertain, however, as there is little documentation on the early history of Poland, or of the movements of the Slavonic people into what became the territory so designated.

Around the 14th century, there was little difference between those called knights and those referred to as szlachta in Poland. Members of the szlachta had the personal obligation to defend the country (pospolite ruszenie), and thereby became the kingdom's privileged social class. It was them who were obliged to build and support castles as well as to keep peace and order on territory they were assigned.

The armies of the Polish–Lithuanian Commonwealth, or the First Polish Republic, were commanded by four hetmans. The armies comprised:

Some units of the Commonwealth used fairly unusual tactics. These units included:

After partitions of Poland, during the period from 1795 until 1918, Polish military was recreated several times in Poland during uprisings like the November Uprising of 1830 and the January Uprising in 1863, and outside Poland like during Napoleon Bonaparte wars (Polish Legions in Italy). The Kingdom of Poland, ruled by the Russian Tsar with a certain degree of autonomy, had a separate Polish army in the years 1815-1830 which was disbanded after the unsuccessful insurrection.

Large numbers of Poles also served in the armies of the partitioning powers, Russia, Austria-Hungary (before 1867 Austria) and Germany (before 1871 Prussia). However, these powers took care to spread Polish soldiers all over their armies and as a rule did not form predominantly Polish units.

During World War I, the Polish Legions were set up in Galicia, the southern part of Poland under Austrian occupation. They were both disbanded after the Central Powers failed to provide guarantees of Polish independence after the war. General Józef Haller, the commander of the Second Brigade of the Polish Legion, switched sides in late 1917, and via Murmansk took part of his troops to France, where he created the Blue Army. It was joined by several thousand Polish volunteers from the United States. It fought valiantly on the French front in 1917 and 1918.

When Poland regained independence in 1918, it recreated its military which participated in the Polish-Soviet War of 1919-1922 and in the Second World War 1939–1945. During the German occupation of Poland, a number of resistance movements were created, of which the Armia Krajowa (Home Army) was most significant.

The Polish armed forces, then known as Polish People's Army, were part of the Soviet-controlled Warsaw Pact. Polish units took part in occupying Czechoslovakia in response to the Prague Spring in 1968. The command post for the invasion was actually located on Polish soil, at Marshal Ivan Yakubovsky's Legnica headquarters. [1]

After January 1990 the name of the armed forces was changed to 'Armed Forces of the Republic of Poland,' to accord with the Polish State's new official name.

Following the destruction of Saddam's regime the Polish Land Forces supplied a brigade and a division headquarters for the 17-nation Multinational Division Central-South, part of the U.S.-led Multi-National Force Iraq. At its peak Poland had 2,500 soldiers in the south of the country. Poland deployed about ten attack and transport helicopters as part of its force in Iraq between 2004 and 2008. [3]

The troop number was reduced to 900 in 2006. Of the 900 soldiers, only 80 ever left their Forward operating base to conduct operations. 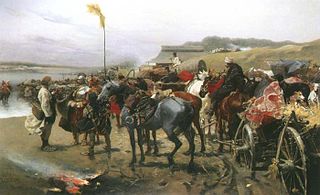 Wojsko kwarciane was the term used for regular army units of Poland. The term was used from 1562.

Wojsko komputowe is a type of military unit used in the Polish–Lithuanian Commonwealth in the 17th century and the 18th century. 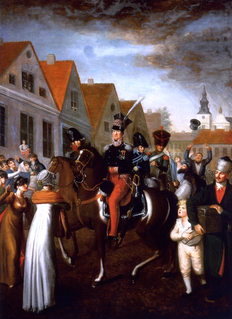 Greater Poland uprising of 1806 was a military insurrection by Poles in Wielkopolska against the occupying Prussian forces after the Partitions of the Polish–Lithuanian Commonwealth (1772–1795).

The Smolensk War (1632–1634) was a conflict fought between the Polish–Lithuanian Commonwealth and Russia.

The Land Forces are a military branch of the Polish Armed Forces. They currently contain some 77,000 active personnel and form many components of the European Union and NATO deployments around the world. Poland's recorded military history stretches back a millennium – since the 10th century, but Poland's modern army was formed after the country regained independence following World War I in 1918.

Piechota wybraniecka also known as piechota łanowa was a type of an infantry formation in the Polish–Lithuanian Commonwealth. Formed in 1578. Consisted of "royal" peasants from not charged and revendicated royal lands. 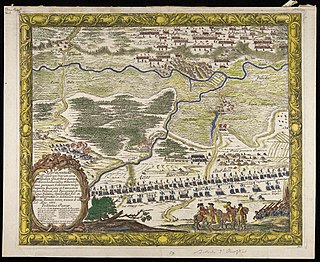 The Battle of Ujście was fought on July 24–25, 1655 between forces of the Polish–Lithuanian Commonwealth commanded by Krzysztof Opaliński and Andrzej Grudziński on one side, and on the other Swedish forces commanded by Arvid Wittenberg. Krzysztof Opaliński and Bogusław Leszczyński, dissatisfied with policies of King John II Casimir of Poland, decided to become Swedish allies together with the pospolite ruszenie of Greater Poland to Charles X Gustav of Sweden. 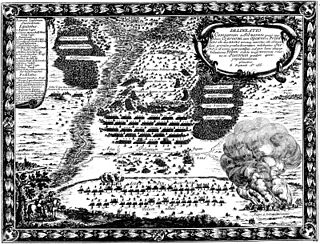 The Polish–Ottoman War (1620–1621) was a conflict between the Polish–Lithuanian Commonwealth and the Ottoman Empire over the control of Moldavia. It ended with the Commonwealth withdrawing its claims on Moldavia.

The Siege of Smolensk lasted almost a year between 1632 and 1633, when the Muscovite army besieged the Polish–Lithuanian city of Smolensk during the war named after that siege. Muscovite forces of over 25,000 under Mikhail Borisovich Shein began the siege of Smolensk on 28 October. The Polish garrison under Samuel Drucki-Sokoliński numbered about 3,000. The fortress held out for nearly a year, and in 1633 the newly-elected Polish king Władysław IV organised a relief force. In a series of fierce engagements, Commonwealth forces gradually overran the Russian field fortifications, and by 4 October the siege had broken. Shein had become besieged in his camp, and began surrender negotiations in January 1634, capitulating around 1 March.

Warfare in Medieval Poland covers the military history of Poland during the Piast and Jagiellon dynasties.

Army of the Duchy of Warsaw refers to the military forces of the Duchy of Warsaw. The Army was significantly based on the Polish Legions; it numbered about 30,000 and was expanded during wartime to almost 100,000. It was composed of infantry with a strong cavalry force supported by artillery. The Napoleonic customs and traditions resulted in some social tensions, but are generally credited with helpful modernization and useful reforms.

Obrona potoczna, variously translated into English as "Permanent Defense", "General Defense", or "Current Defense" was a hired military force in the 15th- and 16th-century Kingdom of Poland and the Polish–Lithuanian union, charged with defending the country's southern borders against incursions by the Tatars as well as occasional raids by Moldovans, Turks and Wallachians.

The Battle of Mątwy was the biggest and bloodiest battle of the so-called Lubomirski Rokosz, a rebellion against Polish King John II Casimir, initiated by a magnate and hetman, Jerzy Sebastian Lubomirski. It took place on 13 July 1666 in the village of Mątwy, and ended in rebel victory. The royal army of the Polish–Lithuanian Commonwealth lost almost 4000 of its best and most experiences soldiers, who were murdered by Lubomirski's men. Rebel losses are estimated at approximately 200.

The Battle of Orynin took place on 28 September 1618. Polish forces under Hetmans Stanislaw Zolkiewski and Stanislaw Koniecpolski faced Crimean Tatars from Budjak, commanded by Khan Temir. The battle took place near Orynin in Podolia: after one day of battle, the Tatars bypassed the Poles, taking advantage of internal divisions within the Polish camp, and headed northwards, ransacking the southeastern corner of the Polish-Lithuanian Commonwealth. As a result of their raid, a number of towns and villages in Podole Voivodeship, Ruthenian Voivodeship, Braclaw Voivodeship and Volhynia Voivodeship were burned to the ground, and their residents taken into slavery.