Hohoe Municipal is one of the 25 administrative districts of the Volta Region of Ghana.  It was carved out of the former Kpando District. It was established by the Legislative Instrument (L.I. 2072) of 2012. The Municipality has a total land area of 1,172 km², which is 5.6 per cent of the land area of the region. It shares borders with the Republic of Togo on the east, forming part of Ghana's international border; on the southeast by the Afadzato district and southwest by Kpando Municipality; on the north with Jasikan district; and on the northwest with the Biakoye districts. [2] Its capital, Hohoe, is about 78 km from Ho, the regional capital and 220 km from Accra, the national capital. The population of Hohoe Municipality [3] , according to the 2010 Population and Housing Census, is 167,016 representing 7.9 per cent of the total population of the Volta Region. It comprises 52.1 per cent females and 47.9 percent males [4]

There are many private and public basic schools in Hohoe. A list of educational institutions in Hohoe are as follows:

The Hohoe Municipality is a home of tourism potential capable of transforming its economy, as well as its overall contribution to national income when fully harnessed. It has beautiful landscapes, numerous eco-tourism sites that make it one of the most important tourist areas in the country. The Hohoe Municipality has the following marked tourism features: [15] [16]

i. The highest peak in Ghana Mount Afadja (Afadjato) located between Liati Wote and Gbledi communities 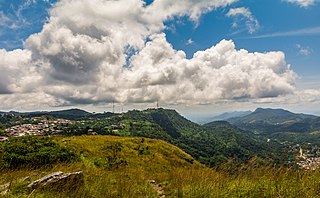 Mount Afadja is located close to the Ghana-Togo border. Known as Afadjato to the Ewe people of Ghana and Togo, it is the highest mountain in Ghana. The summit of this peak is located near the border with Togo, in the Volta Region of Ghana, close to the villages of Liati Wote and Gbledi Gbogame in the Afadjato South District and Hohoe Municipality respectively. It is about 178 kilometers (111 mi) northeast of Accra, and 178 kilometers (111 mi) northwest of Lomé. Part of the Agumatsa sub-range of the West Africa Mountains, its summit is 885 metres (2,904 ft) above sea level. The summit of Mount Aduadu lies 3.5 kilometers (2 mi) to the east of Mount Afadja. 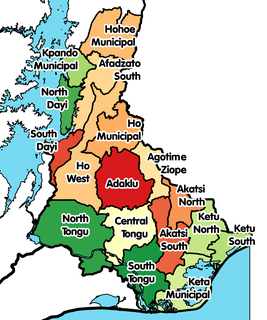 Kpando Municipal District is one of the eighteen districts in Volta Region, Ghana. Originally created as an ordinary district assembly on 10 March 1989 when it was known as Kpando District, until the southern part of the district was split off by a decree of president John Agyekum Kufuor on 19 August 2004 to create South Dayi District; thus the remaining part has been retained as Kpando District. However on 28 June 2012, the southern part of the district was later split off to create North Dayi District on 28 June 2012; while the remaining part was elevated to municipal district assembly status on the same year to become Kpando Municipal District. The municipality is located in the western part of Volta Region and has Kpando as its capital town. 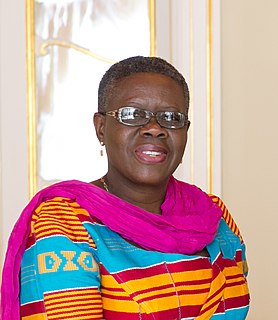 Akua Sena Dansua is an experienced Ghanaian media and communications consultant, politician and governance and leadership practitioner. She was the Member of Parliament for North Dayi in Ghana and former Ambassador to Germany.

Joseph Zaphenat Amenowode is a Ghanaian politician and academic. He was the Member of Parliament for Hohoe South and was the Minister for the Volta Region of Ghana from January 2009 until his dismissal on 6 March 2012. He has worked as a university lecturer prior to going into politics.

Tagbo Falls is a waterfall near Mount Afadjato in Ghana, located at Liati Wote, approximately 27 kilometres east of the township of Hohoe.The water falls down in several stages, with the last stage being about 60 m. high. The area is surrounded by rainforest.

Bishop Herman College, sometimes abbreviated to BIHECO, is a boys-only second-cycle institution located at Kpando in the Volta Region of Ghana.

Kukurantumi is the capital of the Abuakwa North Municipal District of the Eastern Region of Ghana.

Prince Jacob Hayibor was a Ghanaian politician who served as the member of parliament for the Hohoe North Constituency in the Volta Region of Ghana.

Sasadu Festival is an annual festival celebrated by the chiefs and people of the Sasadu communities Alavanyo, Afrofu, Saviefe and Sovie. It is located in the Hohoe Municipality in the Volta Region of Ghana. It is usually celebrated in the month of October on rotational basis. SASADU is an acronym for Sovie, Alavanyo, Saviefe, Akrofu Development Union which marks the symbol of unity and peace among the four communities.

Wli Falls Festival is an annual festival celebrated by the chiefs and people of Wli Traditional Area in the Volta Region of Ghana. It comprises Todzi, Agoviefe and Afegame communities. It is usually celebrated in the month of September. Wli Falls is about 20 km from Hohoe. 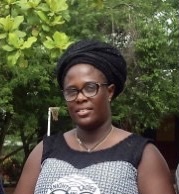 Mama Ametor Hoebuadzu II is the Paramount Queen of the Alavanyo Traditional Area in the Volta region of Ghana.