Holbæk Barracks (Danish: Holbæk Kaserne) is a former military facility from 1913 located in Holbæk, Denmark. The buildings have now been converted into housing, offices and facilities for local associations. Two buildings, Ridehuset (The Equestrian House) and Eksercerhuset (The Drill House), were listed in 2004.

Holbæk Barracks was one of a series of military facilities on the island of Zealand that was created as a result of the Danish Army Act of 1909 (Hærloven). Among the others were the barracks in Ringsted, Slagelse and Vordingborg. The buildings were designed by Olaf Petri and Egil Fischer. Construction began in 1912 and it was inaugurated in 1913. It housed infantry and artillery troops. Kostforplejningen was built in 1939 and a new garage complex was built in 1951-52, [1]

The barracks were decommissioned as a result of the Defence Agreement of 1980. The artillery regiment was merged with Sjælsmark Artillery Regiment in 1982. Some of their buildings were taken over by the local department of the Home Guard. They moved out in 2010. The Infantry Barracks were converted into housing. A number of the other buildings were taken over by Holbæk Municipality, including the Commander's House (Kommandantbygningen), the guardhouse, the Equestrian House (Ridehuset), the Drill House (Eksercerhuset), the Exercide House (Gymnastikhuset) and Kostforplejningen. The garage complex was demolished in 2004 and the area known as "Lille Fælled" was subsequently redeveloped. The Home Guard left moved out in 2010. Ridehuset and Eksercerhuset were listed in 2004. [2] 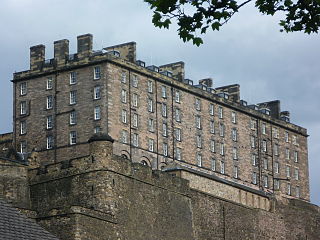 Barracks are usually a group of long buildings built to house military personnel or laborers. The English word comes via French from an old Spanish word "barraca" (hut), originally referring to temporary shelters or huts for various people and animals, but today barracks are usually permanent buildings for military accommodation. The word may apply to separate housing blocks or to complete complexes, and the plural form often refers to a single structure and may be singular in construction. 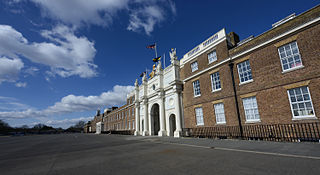 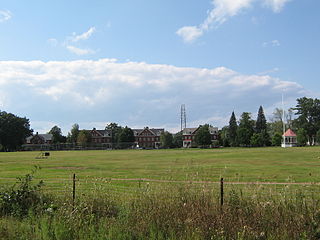 Fort Ethan Allen was a United States Army installation in Vermont, named for American Revolutionary War figure Ethan Allen. Established as a cavalry post in 1894, today it is the center of a designated national historic district straddling the town line between Colchester and Essex. Locally, it is known simply as "The Fort", and now houses a variety of businesses, academic institutions, and residential areas.

'Warwick Camp' was originally the rifle ranges and a training area used by units of the Bermuda Garrison based elsewhere in the colony. Today, the Camp is the home of the Royal Bermuda Regiment.

Warner Barracks was a United States Army military base in the city of Bamberg, Bavaria, southern Germany. The base had been occupied by U.S. forces since the end of World War II. Elements of the U.S. Army’s 3rd Infantry Division and 45th Infantry Division entered the town on 13 and 14 April 1945. But before the war, this military site had a colorful history that goes hand-in-hand with Bamberg’s history, which began in the 10th century. Bamberg was originally a fort on a hill. The view enabled soldiers of the time to watch the city and guard it against possible attacks. In 973, the Duke of Bavaria gained control of the fort. The city and fort fell under Swedish Protestants’ control during the Thirty Years War when the Swedes engulfed the city and took it forcibly in 1634.

Rosenborg Barracks, one of two barracks of the Royal Danish Life Guard, is located next to Rosenborg Castle in Copenhagen, Denmark. Its address is Gothersgade but it has a long facade along Øster Voldgade.

Sølvgade Barracks is a former military facility from 1771 located on the corner of Sølvgade and Øster Voldgade in central Copenhagen, Denmark. The barracks closed in 1926 and the large Baroque complex designed by Nicolas-Henri Jardin then served as headquarters for DSB, the Danish state railways, until 2013, when the building was converted into student apartments. 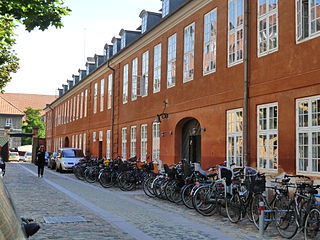 Østerfælled Barracks, later known as Østerbrogade Kaserne, was a barracks originally built in the 1890s for the Guard Hussars of the Royal Danish Army in the emerging Østerbro district of Copenhagen, Denmark. Its grounds have now been transformed into a mixed-use development surrounding a pedestrian zone and is now known as Østerfælled Torv. Many of the old buildings have been retained while others have been demolished to make way for new residential buildings. The old main entrance to the barracks is located on the corner of Østerbrogade and Gunner Nu Hansens Plads. 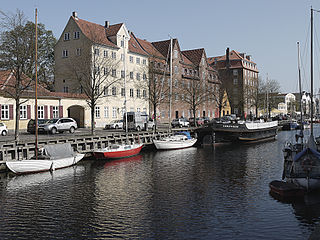 Wildersgade Barracks was a barracks which existed from 1802 until 1822 in the Christianshavn district of Copenhagen, Denmark. Its former premises, which include a purpose-built main building on Wildersgade and converted warehouses, two of them facing Christianshavn Canal, are now listed. They surround a central courtyard which has been converted into a community garden.

Roskilde Barracks, now known as Kildegården, is a former military barracks on Helligkorsvej in Roskilde, Denmark. The buildings are now owned by Roskilde Municipality and used as a hub for local sports clubs and other public associations and societies. 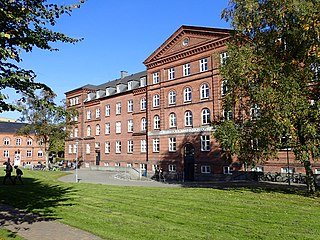 Langelandsgade Kaserne is a former military barracks in Aarhus, Denmark. It was used by the military from 1889 to 1993, when Aarhus University took ownership. After a restoration, it is now the headquarters of the Aarhus University department School of Communication and Culture .

Vester Allé Kaserne is a former military barracks and listed building in the city of Aarhus. The barracks was built on the area between Vester Allé, Frederiks Allé and Thomas Jensens Allé in 1875-1878 and was closed in 1969 after which the buildings were taken over by Aarhus Municipality. There are two remaining buildings left from the original complex; the Officersbygningen and Ridehuset.

Osnabrück Garrison was a major British garrison with facilities located at Osnabrück in Lower Saxony and Münster in North Rhine-Westphalia, Germany. It was home to 4th Armoured Brigade and most of its subordinate units. It formed a major part of British Forces Germany. 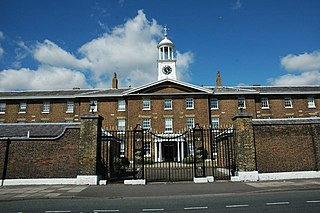 The Royal Marine Depot, Deal was a military installation occupied by the Royal Marines and located in South Deal, Kent, on the road to Walmer. The Depot was first established in Deal in 1861, occupying part of the Royal Naval Hospital. In 1868 the Depot expanded and took over the nearby 18th-century Army barracks.

Ferris Barracks is a former US military garrison located in Erlangen, a Middle Franconian city in Bavaria, Germany. It was active as a US military base between 1945 and 1994. The facility was occupied after World War II and designated Ferris Barracks in honor of Second Lieutenant (2LT) Geoffrey Cheney Ferris. Ferris Barracks was closed on 28 June, 1994, and officially turned over to the German government. Though largely dismantled, certain historic buildings and monuments have been preserved and converted for alternative use. The area has undergone extensive construction and is now referred to as Röthelheimpark. 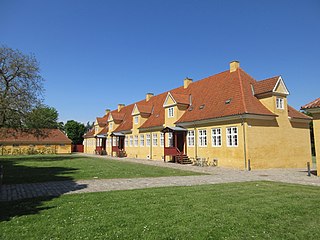 Jægersborg Barracks, also known as Jægergården, is a former military facility located on Jægersborg Allé in Gentofte in the northern suburbs of Copenhagen, Denmark. It was converted into housing in 2910.