Holbrook ( Navajo : Tʼiisyaakin) is a city in Navajo County, Arizona, United States. According to the 2010 census, the population of the city was 5,053. [3] The city is the county seat of Navajo County. [5]

Holbrook was founded in 1881 or 1882, when the railroad was built, and named to honor the first chief engineer of the Atlantic and Pacific Railroad, Henry Randolph Holbrook. [6]

The Holbrook area was inhabited first by the Anasazi, then Puebloans, then the Navajo and Apache. In 1540 (some seventy years before Jamestown or the Pilgrims) Coronado searched for the Seven Cities of Cibola and camped some sixty miles east of Holbrook. Coronado sent an expedition west to find the Colorado River, and they crossed the Little Colorado some twenty-five miles east of Holbrook and found a wonderland of colors they named "El Desierto Pintada" - The Painted Desert. The expedition was then led by the Hopis to the Grand Canyon.

After the Mexican–American War ended in 1848 the area was ceded to the United States. From 1851-57 the U.S. Army sent three expeditions along the 35th parallel, the third led by Lt. Beale who created a ten foot wide wagon road. The area was known as Navajo Springs, after a spring a dozen miles northeast of Holbrook. Soon afterwards a store and saloon were established at the confluence of the Rio Puerco and Little Colorado Rivers two miles east of Holbrook, and the area became known as Horsehead Crossing.

In 1876, Mormons emigrated from Utah and began settlements near Horsehead Crossing on both the Little Colorado and Rio Puerco rivers. During 1881 and 1882, railroad tracks were laid down and a railroad station was built to supply wood and water and to freight supplies south to Fort Apache. The community was then named Holbrook after the first engineer of the Atlantic and Pacific Railroad. The railroad sold a million acres to a Boston investment group which established the Aztec Land and Cattle Company, better known as the Hashknife Outfit. It leased another million acres of government land and became one of the largest cattle ranches to ever exist. Holbrook became its headquarters and quickly grew into a cow-town.

The Hashknife Outfit hired cowboys, many of whom were wanted men hiding from arrest. Rustling of cattle and horses over two million acres plagued the Hashknife Outfit. With cowmen, sheepmen, farmers, rustlers and outlaws competing for the same land, a range war ensued, called both the Pleasant Valley War and the Tonto Basin War. It likely killed as many men as any of the western range wars. Many of the events that played out during the Pleasant Valley War up to 1887 occurred in and around Holbrook, including the famous Holbrook Shootout.

On September 4, 1887, Commodore Perry Owens, the Apache County Sheriff, came to Holbrook to arrest Andy Blevins, a.k.a. Andy Cooper, for horse theft. Blevins had also recently bragged about killing two men and had killed many more, including two lawmen.

Sheriff Owens insisted on confronting the Blevins brothers alone, knowing there would likely be a shootout. He went to the Blevins house, which still stands, knocked on the door, and when Blevins asked what he wanted, announced he'd come to arrest him. Blevins resisted arrest and a shootout occurred. Blevins, two brothers, a friend, and Blevins horse were shot; all died, except one brother.

Owens emerged unscathed, despite being shot at from a half-dozen feet away. Owens single-handedly taking on four men made him a western legend rivaling the Earp Brothers and Texas John Slaughter as lawmen of the Old West.

Holbrook was known as "the town too tough for women and churches" and in 1914 was said to be the only county seat in the U.S. that didn't have a church (the Mormons had moved twenty-five miles south to Snowflake and Taylor). The original railroad station was replaced by the Santa Fe Depot in 1892.

Navajo County was divided off of Apache County in 1895 and Holbrook became the county seat. Many lawmen and cowboys from the area became Rough Riders with Theodore Roosevelt in the late 1800s. But by 1902 The Hashknife Outfit was bankrupt and the land was sold to the Babbitt brothers.

President Roosevelt named the Petrified Forest (including part of the Painted Desert) a National Monument in 1906. Holbrook was incorporated in 1917. Most of the Beale Wagon Road became Route 66 in 1926 and passed through both the Petrified Forest and Holbrook. Tourism started taking over the economy.

Arizona is famous for its huge Meteor Crater, but Holbrook also witnessed its own small meteor event. In the evening of July 19, 1912, a smoke trail appeared in the sky and soon after, at 7:15 p.m., a meteorite with an estimated mass of 190 kilograms (419 pounds) exploded high in the atmosphere.

An estimated 16,000 or more minor fragments rained down over Navajo County in an area about 6 miles east of Holbrook. The primary explosion was heard at least 40 miles away and one of the witnesses in Holbrook, then seventeen-year-old Pauline McCleve, described the event as the loudest sound she ever heard. The largest piece of the Holbrook Meteorite that has been recovered was found shortly after. It weighs 14.5 pounds and resides at Arizona State University in Tempe.

The Holbrook meteorite was found to be of the chondrite (stony) type. [7]

According to the United States Census Bureau, the city has a total area of 15.4 square miles (40 km2), all of it land.

Holbrook has a semi-arid climate (BSk) with cold to cool winters and hot summers. Although the mean snowfall is 0.16 metres (6.30 in), the median is zero, so the majority of winters do not have measurable snow. There are high diurnal temperature variations year-round.

There were 1,626 households out of which 40.7% had children under the age of 18 living with them, 52.3% were married couples living together, 16.4% had a female householder with no husband present, and 26.5% were non-families. Of all households 22.6% were made up of individuals and 6.8% had someone living alone who was 65 years of age or older. The average household size was 2.93 and the average family size was 3.47.

The city is served by the Holbrook Unified School District and serves 2324 students.

One of the four main campuses of Northland Pioneer College community college is located in Holbrook. The other three main campuses are in Show Low, Snowflake, and Winslow, all in Navajo County, Arizona.

The Holbrook Public Library is located in Holbrook. [13] 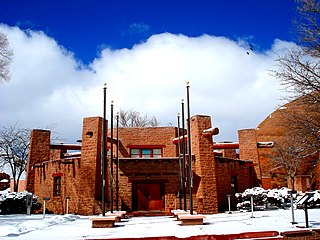 Apache County is located in the northeast corner of the U.S. state of Arizona. As of the 2010 census its population was 71,518. The county seat is St. Johns. 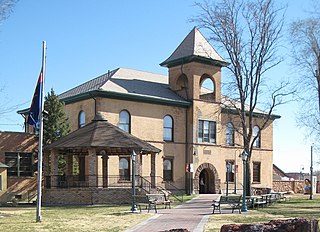 Ganado is a chapter of the Navajo Nation and census-designated place (CDP) in Apache County, Arizona, United States. The population was 1,210 at the 2010 census.

St. Johns is the county seat of Apache County, Arizona, United States. It is located along U.S. Route 180, mostly west of where that highway intersects with U.S. Route 191. As of the 2010 census, the population of the city was 3,480. 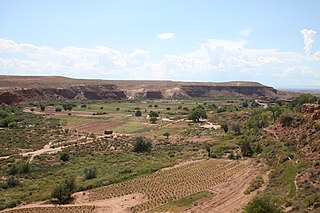 Moenkopi is a census-designated place (CDP) in Coconino County, Arizona, United States, adjacent to the southeast side of Tuba City off U.S. Route 160. The population was 964 at the 2010 census. 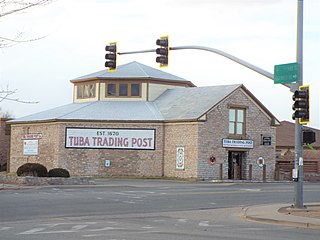 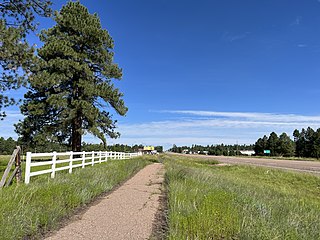 Heber-Overgaard is a census-designated place (CDP) in Navajo County, Arizona, United States. Situated atop the Mogollon Rim, the community lies at an elevation of 6,627 feet (2,020 m). The population was 2,822 at the 2010 census. Heber and Overgaard are technically two unincorporated communities, but as of the 1990 census, their close proximity has led to the merged name of "Heber-Overgaard".

Jeddito is a census-designated place (CDP) in Navajo County, Arizona, United States. The population was 293 at the 2010 census.

Snowflake is a town in Navajo County, Arizona, United States. It was founded in 1878 by Erastus Snow and William Jordan Flake, Mormon pioneers and colonizers. It has frequently been noted on lists of unusual place names. According to 2010 Census, the population of the town is 5,590.

Taylor is a town in Navajo County, Arizona, United States. It was founded by Mormon settlers in January 1878, several months before the neighboring community of Snowflake, Arizona. Taylor straddles Silver Creek, flowing from the nearby White Mountains to the Little Colorado River on Arizona's Colorado Plateau. According to the 2010 census, the population of the town is 4,112. 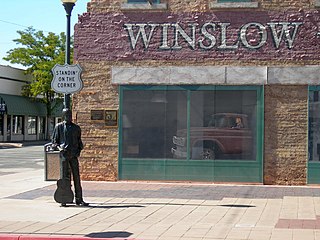 Commodore Perry Owens was an American-born lawman and gunfighter of the Old West. One of his many exploits was the Owens-Blevins Shootout in Arizona Territory during the Pleasant Valley War. 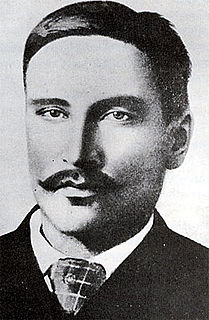 The Pleasant Valley War, sometimes called the Tonto Basin Feud, or Tonto Basin War, or Tewksbury-Graham Feud, was a range war fought in Pleasant Valley, Arizona in the years 1882-1892. The conflict involved two feuding families, the Grahams and the Tewksburys. The Grahams were ranchers, while the Tewksburys, who were part Indian, started their operations as cattle ranchers before branching out to sheep. 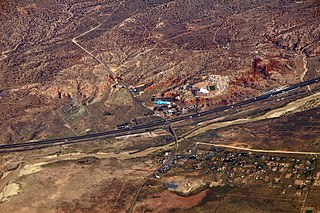 Sanders is an unincorporated community and census-designated place (CDP) in Apache County, Arizona, United States. Sanders is located at the junction of U.S. Route 191 and Interstate 40. As of the 2010 census, it had a population of 630.

Aztec Land and Cattle Company, Limited ("Aztec") is a land company with a historic presence in Arizona. It was formed in 1884 and incorporated in early 1885 as a cattle ranching operation that purchased 1,000,000 acres in northern Arizona from the Atlantic & Pacific Railroad. It then imported approximately 32,000 head of cattle from Texas and commenced ranching operations in Arizona. Because Aztec's brand was the Hashknife, a saddler's knife used on early day ranches, the company was known more famously as The Hashknife Outfit. The company has been in continuous existence since 1884.

Wilford, Arizona is a ghost town in Navajo County, Arizona, United States, located approximately 7 miles south of Heber-Overgaard, along Black Canyon Rd. The town was settled in April 1883 by a group of Latter-day Saints from the failed Brigham City settlement. Wilford was eventually abandoned due to years of overgrazing by cattle. The last residents moved out in 1926.