Holy Land USA is an 18-acre (7.3 ha) theme park in Waterbury, Connecticut, inspired by selected passages from the Bible. It consists of a chapel, stations of the cross, and replicas of catacombs and Israelite villages constructed from cinder blocks, bathtubs, and other discards. [1] The park closed to the public in 1984 and was vandalised. But on September 14, 2014, the site reopened to the public for the first time in 30 years with an inaugural Mass and access to the grounds. The area is open to the general public during daylight hours.

Holy Land USA was conceived by John Baptist Greco, a Waterbury-based attorney. Greco, a Roman Catholic, founded a volunteer organization called Companions of Christ, with the purpose of creating an attraction that would replicate Bethlehem and Jerusalem of the Biblical era. Construction commenced in 1955. [2] Bob Chinn, the grounds chairman at Holy Land USA, recalled Greco's mission in a 2001 interview with The New York Times : "He was a very spiritual man. He wanted to do this for the people of the community. He felt no one, no matter the race, creed or color, should be separated. He wanted a place for all people to sit and be peaceful." [2]

Among the attractions at the site were a recreation of the Garden of Eden, a diorama depicting Daniel in the lions' den, and various recreations of the life and ministry of Jesus. The centerpiece of the site was a 56-foot (17 m) cross and an illuminated sign that read "Holy Land USA". [3]

During its peak years in the 1960s and 1970s, Holy Land USA attracted upwards of 40,000 visitors annually. [2] Greco closed Holy Land USA in 1984, with plans to improve and expand the site. But the work was left unfinished when Greco died in 1986. The property was left to the Filippini Sisters. [2]

Since its closure, Holy Land USA had fallen into a state of advanced disrepair. Although it was not open to the public, the site continued to attract attention. In 2002, the Waterbury Region Convention and Visitors Bureau received more than 150 calls a year for directions to the site. [3] The web site Roadside America has included it in its coverage of offbeat attractions, albeit with the cautionary note that visitors should "explore with caution (and with an up-to-date tetanus shot)." [4] Many attractions and statues at the site had either been vandalized or otherwise fallen into disrepair. [4]

There was ongoing debate about the site's future. It was suggested that the park be preserved as folk art, [1] [5] and there were numerous failed attempts to restore the park, including one involving the Knights of Columbus in 2000. [5] The Religious Sisters of Filippi Greco were accused of fearing "liability and being sued" and thereby turning away volunteers and stopping restoration efforts, but they also received support from those who believed that, although accepting the park reluctantly, they had been "good stewards" over it. [5] The Sisters held weekly prayer meetings at the site, and the holy hours on Sundays were devoted to the Virgin of Revelation, [5] an apparition of the Virgin Mary witnessed in 1947 by an Italian on his way to assassinate Pope Pius XII in Rome. [6] The Sisters claim the statue of the Madonna in the chapel is one of three commissioned by Pope John Paul II. [6]

Despite the lack of full restoration, some renovation projects were undertaken while the park was closed. In 1997 a group of Boy Scouts repaired the illuminated "Holy Land USA" sign as part of a community service project, [4] and in 2008 the original 56-foot cross was replaced with a 50-foot (15 m) stainless steel one, which was dedicated in a ceremony led by Archbishop Henry J. Mansell. [7] In response to community outcry a new LED illuminated cross was installed in 2013. The new cross, funded by community donations and with work donated by local construction companies, is a steel structure that stands 65 feet high and 26 feet wide. The state of the art LED lighting system allows the cross to change color based on the Roman Catholic Liturgical colors. [8]

On 11 August 2018, Archbishop Leonard Paul Blair of the Archdiocese of Hartford celebrated a Mass at the park honoring the legacy of Father Michael McGivney, who is under Vatican consideration for sainthood. McGinvney was the founder of the Knights of Columbus. [9]

On June 20, 2013, Mayor Neil O'Leary and car dealer Fred "Fritz" Blasius purchased Holy Land from the Filippini Sisters for $350,000, announcing a plan to clean up and revitalise the site as part of a community effort. The plan included the installation of a new and larger lighted cross on the property. [10] [11] On December 22, 2013, the new cross was illuminated. [12] Since the revival of the cross, the once-overgrown land has been cleared of trees and underbrush. Smaller projects have been put in place to refurbish small areas of the property.[ citation needed ] 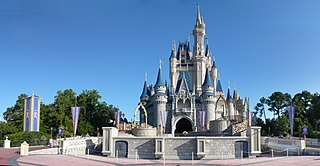 The Walt Disney World Resort, also called Walt Disney World and Disney World, is an entertainment complex in Bay Lake and Lake Buena Vista, Florida, in the United States, near the cities of Orlando and Kissimmee. Opened on October 1, 1971, the resort is owned and operated by Disney Parks, Experiences and Products, a division of The Walt Disney Company. It was first operated by Walt Disney World Company. The property covers nearly 25,000 acres, of which only half has been used. The resort comprises four theme parks, two water parks, 27 themed resort hotels, nine non-Disney hotels, several golf courses, a camping resort, and other entertainment venues, including the outdoor shopping center Disney Springs. 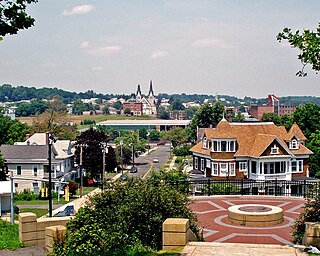 New Britain is a city in Hartford County, Connecticut, United States. It is located approximately 9 miles (14 km) southwest of Hartford. According to 2010 Census, the population of the city is 73,206. 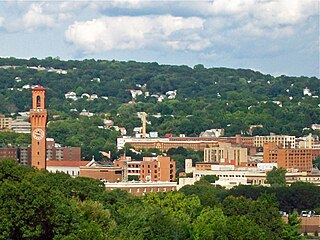 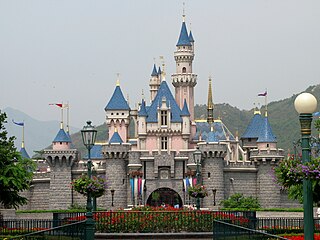 Zoombezi Bay is a 22.7 acre water park owned by the Columbus Zoo and Aquarium near Powell, Ohio just north of Columbus. The park sits on the site of the former Wyandot Lake Amusement Park, which was purchased by the Columbus Zoo and Aquarium in 2006. Zoombezi Bay opened to the public on May 26, 2008, and currently ranks as one of the Midwest's most popular water parks, attracting more than 400,000 visitors annually. 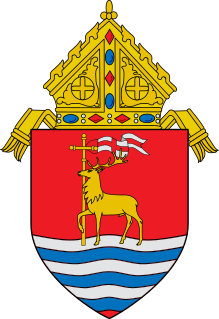 The Roman Catholic Archdiocese of Hartford is a diocese of the Latin Church in Hartford, Litchfield and New Haven counties in the U.S. State of Connecticut. The archdiocese includes about 470,000 Catholics, more than 500 priests, 216 parishes and almost 300 deacons. This is roughly one-half the population of the three counties.

The Holy Land refers to any place that is considered sacred.

Shocktoberfest is an annual haunted event near Reading, Pennsylvania. The attractions include dark attractions, haunted houses, and a haunted hayride. It is referred to by the management of Shocktoberfest as a "haunted theme park" even though it is not a theme park in the true sense of the term.

The Land of Oz is a theme park in the resort town of Beech Mountain, North Carolina, USA. In 1970 it opened as a theme park based on the L. Frank Baum Wizard of Oz books by Carolina Caribbean Corporation under the guidance of Grover Robbins, who had been successful with Tweetsie Railroad, and designed by Jack Pentes. It was fully operational until 1980. As of September 2019, it now opens for Fridays in June for "Journey with Dorothy Tours" and in September for Autumn at Oz - the largest Wizard of Oz festival in the country.

The Holy Land Experience (HLE) is registered as a Christian-based theme park in Orlando, Florida and registered non-profit corporation. HLE conducts weekly church services and bible studies for the general public. HLE’s theme park recreates the architecture and themes of the ancient city of Jerusalem in 1st-century Judea. The Holy Land Experience is owned by the Trinity Broadcasting Network. Jan Crouch was Director and CEO until her death in May 2016.

The neighborhoods of Hartford, Connecticut in the United States are varied and historic.

Saint Mary's Hospital is a Yale-affiliated urban hospital located at 56 Franklin Street, Waterbury, Connecticut. Operated by Trinity Health, it was founded in 1907 by the Sisters of Saint Joseph of Chambéry and is designated as a Level II trauma center. Saint Mary's has been a teaching hospital for the Yale University School of Medicine for over 40 years.

The Pontifical Institute of the Religious Teachers Filippini, known also as the Sisters of St. Lucy Filippini, or simply the Filippini Sisters, is a Catholic religious institute devoted to education. They were founded in Italy in 1692 by Saint Lucy Filippini and Cardinal Marcantonio Barbarigo. The Religious Teachers Fillippini operate schools, hospitals, orphanages, and engage in other ministries in Albania, Brazil, Eritrea, Ethiopia, India, Italy, Ireland, Switzerland, the United Kingdom, and the United States.

Peter Carli is a former American soccer goalkeeper and entrepreneur. He was offered a contract by West Ham United F.C. making him one of the first American soccer players associated with a British First Division club. Along with his family he introduced the Reusch brand of goalkeeper gloves to America and later attempted to establish a professional soccer team in Connecticut.

The South End is a neighborhood/section of the city of Waterbury. It lies southeast of I-84, just south of the downtown district. The section has its own schools, parks and commercial facilities. As it is with other sections/neighborhoods in Waterbury, its distinctive character, shaped by the history and geography of the city, has led residents to form an unusual loyalty to their neighborhood.

Holy Trinity Roman Catholic Church is a parish church in the Archdiocese of Hartford located in Hartford, Connecticut, United States. The parish was founded by Lithuanian immigrants at the turn of the 20th century. Begun in 1912, the current church building realized its current form in 1927.