Horace Sowers Kephart (September 8, 1862 – April 2, 1931) was an American travel writer and librarian, best known as the author of Our Southern Highlanders about his life in the Great Smoky Mountains of western North Carolina and the classic outdoors guide Camping and Woodcraft .

Kephart was born in East Salem, Pennsylvania, and raised in Iowa. He was the director of the St. Louis Mercantile Library in St. Louis, Missouri from 1890 to 1903. In these years Kephart also wrote about camping and hunting trips. [4] Earlier, Kephart had also worked as a librarian at Yale University and spent significant time in Italy as an employee of a wealthy American book collector.

In 1904, Kephart's family (wife Laura and their six children) moved to Ithaca, New York, without him, but Laura and Horace never divorced or legally separated. Horace Kephart found his way to western North Carolina, where he lived in the Hazel Creek section of what would later become the Great Smoky Mountains National Park:

I took a topographic map and picked out on it, by means of the contour lines and the blank space showing no settlement, what seemed to be the wildest part of these regions; and there I went. [5]

Later in life Kephart campaigned for the establishment of a national park in the Great Smoky Mountains with photographer and friend George Masa, and lived long enough to know that the park would be created. He was later named one of the fathers of the national park. He also helped plot the route of the Appalachian Trail through the Smokies. [6] Kephart died in a car accident in 1931, and was buried near Bryson City, North Carolina, a small town near the area he wrote about in Our Southern Highlanders . [7] Two months before his death, Mount Kephart was named in his honor. [4]

The Mountain Heritage Center and Special Collections at Hunter Library, Western Carolina University have created a digitized online exhibit called "Revealing an Enigma" that focuses on Horace Kephart's life and works. This exhibit contains documents and artifacts (photos and maps) that can be browsed or searched.

Kephart is a character in Ron Rash's novel Serena, as well as Walt Larimore's novels, Hazel Creek and Sugar Fork.

He wrote of his experiences in a series of articles in the magazine Field and Stream. These articles were collected into his first book, Camping and Woodcraft, which was first published in 1906. [8] [9] While mostly a manual of living outdoors, Kephart interspersed his philosophy:

Your thoroughbred camper likes not the attentions of a landlord, nor will he suffer himself to be rooted to the soil by cares of ownership or lease. It is not possession of the land, but of the landscape, that enjoys; and as for that, all the wild parts of the earth are his, by a title that carries with it no obligation but that he shall not desecrate nor lay them waste. Houses, to such a one, in summer are little better than cages; fences and walls are his abomination; plowed fields are only so many patches of torn and tormented earth. The sleek comeliness of pasture it too prim and artificial, domestic cattle have a meek and ignoble bearing, fields of grain are monotonous to his eyes, which turn for relief to abandoned old-field, overgrown with thicket, that still harbors some the shy children of the wild. It is not the clearing but the unfenced wilderness that is the camper's real home. He is brother to that good old friend of mine who in gentle satire of our formal gardens and close- cropped lawns, was wont to say, 'I love the unimproved works of God.' [10]

He also published some more books of the same theme such as Camp Cookery (1910) and Sporting Firearms (1912). In addition, he wrote The Hunting Rifle section of Guns, Ammunition and Tackle (New York: Macmillan, 1904), a volume of Caspar Whitney's prestigious American Sportsman's Library. [11]

Combining his own experience and observations with other written studies, Kephart wrote a study of Appalachian lifestyles and culture called Our Southern Highlanders , published in 1913 and expanded in 1922. [4] [12]

He wrote a short history of the Cherokee [13] and other books which became standards in the field. [6]

Kephart completed a typescript for a novel in 1929. However, the book was not edited and published until 2009, when it was published under the title Smoky Mountain Magic by Great Smoky Mountains Association. [14]

Kephart never left the Great Smokies, having been instantaneously killed in a mountain-road automobile accident on April 2, 1931. 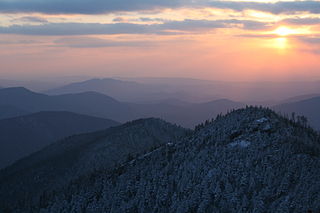 Great Smoky Mountains National Park is an American national park in the southeastern United States, with parts in Tennessee and North Carolina. The park straddles the ridgeline of the Great Smoky Mountains, part of the Blue Ridge Mountains, which are a division of the larger Appalachian Mountain chain. The park contains some of the highest mountains in eastern North America, including Clingmans Dome, Mount Guyot, and Mount Le Conte. The border between the two states runs northeast to southwest through the center of the park. The Appalachian Trail passes through the center of the park on its route from Georgia to Maine. With 12.5 million visitors in 2019, the Great Smoky Mountains National Park is the most visited national park in the United States.

The Cherokee National Forest is a United States National Forest located in the U.S. states of Tennessee and North Carolina that was created on June 14, 1920. The forest is maintained and managed by the United States Forest Service. It encompasses an estimated area of 655,598 acres (2,653.11 km2).

Hunter Library is the university library at Western Carolina University and is located in Cullowhee, North Carolina. Hunter Library supports Western Carolina University's mission of teaching and learning. The Library provides intellectual content, and services related to its discovery and use, for the learning, teaching, and research activities of the University's students, faculty, and staff. By supporting the acquisition of learning and the production of knowledge and scholarship, Hunter Library intends to inspire the individual and the intellect, fostering professional, personal and social growth.

Silers Bald is a mountain in the western Great Smoky Mountains, located in the Southeastern United States. Its proximity to Clingmans Dome and its location along the Appalachian Trail make it a popular hiking destination. 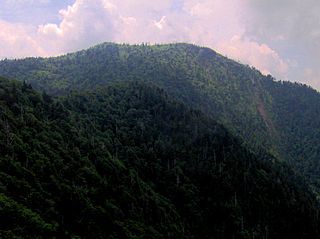 Mount Kephart is a mountain in the central Great Smoky Mountains, located in the Southeastern United States. The Appalachian Trail crosses the mountain's south slope, making it a destination for thru-hikers. The Jumpoff, a 1,000-foot (300 m) cliff on the northeast side of the mountain, has views of the central and eastern Smokies. A stand of Southern Appalachian spruce-fir forest coats the mountain's upper elevations. 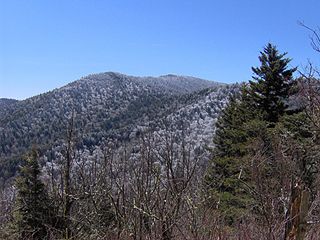 Mount Guyot is a mountain in the eastern Great Smoky Mountains, located in the southeastern United States. At 6,621 feet (2,018 m) in elevation, Guyot is the fourth-highest summit in the eastern U.S., and the second-highest in the Great Smoky Mountains National Park. While the mountain is remote, the Appalachian Trail crosses its south slope, passing to within 1,000 feet (300 m) of the summit. 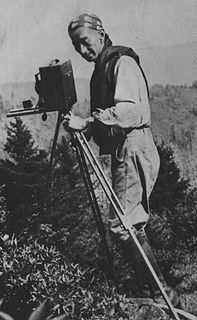 Andrews Bald is a mountain in the Great Smoky Mountains, located in the Southeastern United States. It has an elevation of 5,920 feet (1,800 m) above sea level, making it the highest grassy bald in the Great Smoky Mountains National Park. The mountain is one of two grassy balds maintained in the range by the park service. The other is Gregory Bald, in the western Smokies.

Tricorner Knob is a mountain in the Great Smoky Mountains, located in the Southeastern United States. It has an elevation of 6,120 feet, with 160 feet of clean prominence. The Appalachian Trail and Balsam Mountain Trail intersect near the mountain's summit, making Tricorner Knob the great crossroads of the Eastern Smokies. The Tricorner Knob Shelter, which occupies a flat area on the mountain's southern slope, provides a key rest stop for Appalachian Trail thru-hikers.

Spence Field is a mountain highland meadow in the Great Smoky Mountains, located in the Southeastern United States. It has an elevation of 4,920 feet above sea level. The Appalachian Trail traverses the field, and a backcountry shelter just off the trail provides an overnight stopover for through-hikers.

Mount Collins is a mountain in the Great Smoky Mountains, located in the Southeastern United States. It has an elevation of 6,188 feet (1,886 m) above sea level. Located along the Appalachian Trail between Clingmans Dome and Newfound Gap, the mountain is a popular destination for thru-hikers. A backcountry shelter and a major trail junction are located along the mountain's northeastern slope. The mountain's summit is located amidst the Southern Appalachian spruce-fir forest that covers much of the upper elevations in the central Smokies. 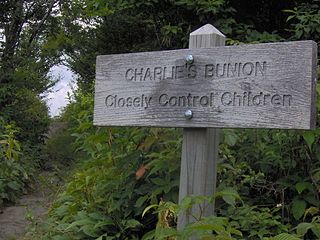 Charlies Bunion is a mountain in the Great Smoky Mountains of the Southeastern United States, characterized by a large boulder-like protrusion just below the summit on its otherwise-sheer northern face. The mountain is a rare instance of a bare-rock summit in the Smokies. 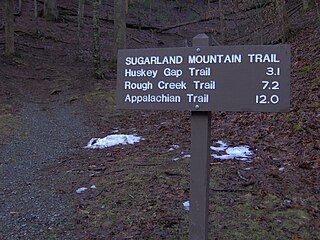 The Sugarland Mountain Trail is an American hiking trail, in the Great Smoky Mountains National Park of Sevier County, Tennessee. The trail traverses Sugarland Mountain, a massive ridge running perpendicular to the main crest of the Smokies and effectively dividing the park's north-central section from its northwestern section. Sugarland Mountain is flanked by the deep upper valleys of two of the park's major watersheds— the West Fork of the Little Pigeon River and Little River. The trail passes through several forest types, including deciduous forest at lower elevations, heaths ("hells") along the mountain's backbone formations, and a stand of Southern Appalachian spruce-fir forest in the upper elevations. Occasional breaks in the foliage allow for views of Mount Le Conte and Sevier County to the east and Blanket Mountain and the ridges above Elkmont to the west.

Our Southern Highlanders: A Narrative of Adventure in the Southern Appalachians and a Study of Life Among the Mountaineers is a book written by American author Horace Kephart (1862–1931), first published in 1913 and revised in 1922. Inspired by the years Kephart spent among the inhabitants of the remote Hazel Creek region of the Great Smoky Mountains, the book provides one of the earliest realistic portrayals of life in the rural Appalachian Mountains and one of the first serious analyses of Appalachian culture. While modern historians and writers have criticized Our Southern Highlanders for focusing too much on sensationalistic aspects of mountain culture, the book was an important departure from the previous century's local color writings and their negative distortions of mountain people.

"Cumberland Gap" is an Appalachian folk song that likely dates to the latter half of the 19th century and was first recorded in 1924. The song is typically played on banjo or fiddle, and well-known versions of the song include instrumental versions as well as versions with lyrics. A version of the song appeared in the 1934 book, American Ballads and Folk Songs, by folk song collector John Lomax. Woody Guthrie recorded a version of the song at his Folkways sessions in the mid-1940s, and the song saw a resurgence in popularity with the rise of bluegrass and the American folk music revival in the 1950s. In 1957, the British musician Lonnie Donegan had a No. 1 UK hit with a skiffle version of "Cumberland Gap".