Hornsherred (Danish pronunciation:  [ˈhoɐ̯ˀnsˌhɛɐ̯ð̩] ) is a peninsula between Roskilde Fjord and Isefjord on the island of Zealand in eastern Denmark.

It falls within the expanded Frederikssund municipality and includes Jægerspris and Skibby and before 1 January 2007 a part of Bramsnæs Municipality, now a part of Lejre Municipality. It is connected to Frederikssund by the Kronprins Frederik bridge which was built in 1935. The area is increasingly popular as a venue for tourists with facilities for walking, cycling and sailing.

Hornsherred has a variety of attractions including Jægerspris Castle, [1] the Færgegård Museum of Local History [2] and the walking and cycling tracks [3] around the peninsula. There is a yachting harbour at Jægerspris. The peninsula also has a number of stone age burial sites. Skibby Church with frescoes dating back to the middle ages is one of the main cultural attractions.

Frederikssund Kommune is a municipality on the shores of Roskilde Fjord in the northern part of the island of Zealand (Sjælland) in eastern Denmark. On 1 January 2007, the municipality was enlarged to include the old Jægerspris, Slangerup, and Skibby municipalities. It now covers an area of 250 km² and has a population of 44,401. As of 1 January 2014 its mayor is John Schmidt Andersen, a member of the agrarian liberal Venstre political party. Frederikssund municipality belongs to Region Hovedstaden. 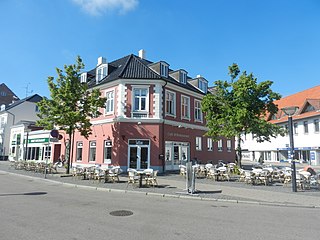 Hillerød Kommune is a municipality in Region Hovedstaden. The municipality covers an area of 191 km², and has a total population of 48,728. The mayor of the municipality as of 1 January 2018 is Kirsten Jensen, a member of the Social Democratic political party.

Varde Municipality is a municipality in Region of Southern Denmark on the west coast of the Jutland peninsula in southwest Denmark. Its mayor is Erik Buhl Nielsen, a member of the Venstre political party. The main town and site of its municipal council is the town of Varde. Its area is 1255.79 km². It has a population of 50,125 (2008).

Vejen Municipality is a municipality in Region of Southern Denmark on the Jutland peninsula in south Denmark. The municipality covers an area of 817 km², and has a total population of 42,447 (2008). Its mayor is Egon Fræhr, a member of the Venstre political party. 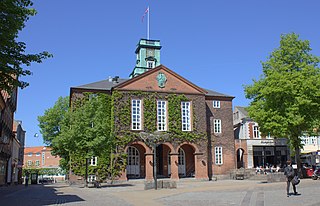 Kolding municipality is a municipality in Region Syddanmark on the east coast of the Jutland peninsula in southeast Denmark. The municipality covers an area of 640 km², and has a total population of 87,781 (2008). Its mayor is Jørn Pedersen, a member of the Liberal Party (Venstre) political party. The main city and the site of its municipal council is the seaport city of Kolding, the sixth largest city in Denmark.

Odder municipality is a municipality in Region Midtjylland on the east coast of the Jutland peninsula in Central Denmark just south of Aarhus and is a part of the greater Aarhus area. The municipality covers an area of 225.04 km², including the islands of Alrø and Tunø. It has a population of 22, 854.

Hedensted Kommune is a municipality in Region Midtjylland formed out of three former municipalities, one of which with the same name, 1 January 2007 on the Jutland peninsula in central Denmark. Its seat and main town is Hedensted. 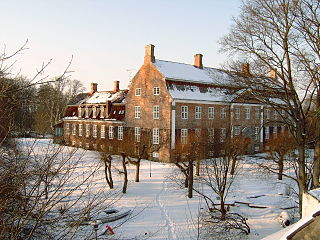 Orø is a small island in Denmark located in the Isefjord.

J.F. Willumsens Museum is in Frederikssund, Denmark. The art museum is operated by Frederikssund Municipality. 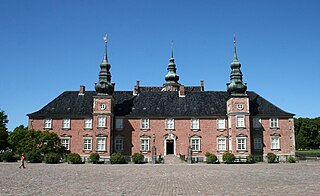 Jægerspris Castle, in Jægerspris on the Hornsherred peninsula west of Copenhagen, is a Danish manor house. It has belonged to the Danish monarchs for most of its history which dates back to the 13th century. In the 1850s it became a retreat for King Frederik VII and his morganatic wife Countess Danner, who sought refuge there to escape the controversy their marriage had caused among the establishment in Copenhagen. After the king's death, Countess Danner turned it into an asylum for women.

Selsø is a historic manor house located near Skibby, on the Hornsherred peninsula, Frederikssund Municipality, some 50 km (31 mi) west of Copenhagen, Denmark. The estate traces its history back to the 13th century. The current main building dates from 1576 but was renovated in the Baroque style in 1734. The estate has been owned by the Scheel-Plessen family since 1721 but the recently restored main building and its immediate surroundings have bow been ceded to a self-owning foundation and is now operated as a museum. The building is also used as a venue for concerts and other events. The knight's hall is decorated with paintings by Hendrick Krock. The main building, a gatehouse from 1734 and the east wing of the adjacent home farm (Avlsgården) were listed on the Danish registry of protected buildings and places in 1918.

Sæby Church is located in the small village of Sæby on the Hornsherred peninsula, Lejre Municipality, some 50 km west of Copenhagen, Denmark. Originating in a Romanesgue church from the 13th century, later expanded with a Gothic tower, it owes its current appearance to a renovation undertaken by Jørgen Hansen Koch in 1824.