Horry County is the central county in the Myrtle Beach-Conway-North Myrtle Beach, SC-NC Metropolitan Statistical Area. It is in the Pee Dee region of South Carolina, about 90 miles north of Charleston, South Carolina and about 130 miles east of the state capital Columbia.

Horry County (pronounced OH-REE) was created from Georgetown District in 1801. At this time, the county had an estimated population of 550. Isolated by the many rivers and swamps typical of the South Carolina Lowcountry, the area essentially was surrounded by water, forcing its inhabitants to survive without much assistance from the "outside world". This caused the county residents to become an extremely independent populace, and they named their county "The Independent Republic of Horry". The county was named after, and in honor of, Revolutionary War hero Peter Horry [4] who was born in South Carolina around 1743. Horry started his military career in 1775 as one of 20 captains, elected by the Provincial Congress of South Carolina, to serve the 1st and 2nd Regiments. In 1790, he was assigned to the South Carolina militia under Brigadier General Francis Marion [5]

The population has increased more than fourfold since 1970 as the area has become a destination for retirees and people owning second homes. It has been developed for resorts and retirement communities. The majority-white residents have constituted a majority-Republican voter base since the late 20th century.

On October 29, 2012, the county paid homage to the man for whom the county is named. It commissioned a bronze sculpture of Peter Horry, installing it inside the Horry County Government and Justice Center. The sculpture was designed by artist Garland Weeks. Coastal Monument of Conway designed the stone base. The base of the sculpture is inscribed with the names of the 1801 commissioners on one side and the names of 2011 Horry County Council members on the other; a brief biography of General Peter Horry is on the front. It cost slightly more than $16,200 for both the bust/sculpture and the stone base. [6] [7]

According to the U.S. Census Bureau, the county has a total area of 1,255 square miles (3,250 km2), of which 1,134 square miles (2,940 km2) are land and 121 square miles (310 km2) (9.6%) are covered by water. [8] It is the largest county by land area in South Carolina. [9] The highest point in the county is 124 feet above sea level. [10] Horry County is in the northeastern corner of South Carolina. It is a diverse land made up of rivers, beaches, forests, and swamps, and is bordered by the Atlantic Ocean to the east, the Little Pee Dee River and Drowning Creek (also known as the Lumber River) on its western side, and North Carolina to the north. The Waccamaw River, around 140 mi (225 km) long, runs through southeastern North Carolina and eastern South Carolina into Horry County. The river runs through the coastal plain, along the eastern border between the two states, and into the Atlantic Ocean. [11]

The county's State House of Representatives delegation is currently made up of the following members:

The county's State Senate delegation is currently made up of the following members:

Horry County has a county council whose members represent 11 single-member districts within the county, with a chairman voted at-large. The county council usually meets at 6 pm on the first and third Tuesdays of every month in the council chambers at the Horry County Government and Justice Center at 1301 2nd Avenue in Conway. [25]

Past composition of the County Council [26]

* Note: Bob Grabowski's seat was renumbered from District 6 to District 8 during the redistricting of Council seats.

The Horry County Police Department provides 24-hour services to the unincorporated areas of the county. It is the only county police department in South Carolina. [27] The Horry County Sheriff's Office is responsible for numerous tasks, including courthouse security, processing of warrants, fingerprinting, registration of sex offenders, funeral escorts, background checks, and managing the J. Reuben Long Detention Center. [28] The South Carolina Highway Patrol has a Troop 5 barracks in Conway, and they provide services throughout the county. [29] Myrtle Beach, Conway, Briarcliffe Acres, Atlantic Beach, Surfside Beach, Loris, and Aynor all have their own police departments, which patrol within the relevant town or city's border. North Myrtle Beach has a Public Safety Department, which provides police and fire services in the city of North Myrtle Beach. [30]

In March 2020, Todd Cox, a former Horry County police officer, was fined $300 for failing to investigate reports of sex crimes against children. [31] He and three other officers had been indicted in 2016 on charges of coercing sex and ignoring cases. [32]

Horry County used to be loyally Democratic, even by the standards of the Solid South. In 1936, Republican Candidate Alf Landon did not receive a single vote in Horry County. However, in 1964, Barry Goldwater carried the county by a margin almost as large as John F. Kennedy's 1960 margin. It has voted Republican in every election since, with the exception of supporting the third-party candidacy of Alabama Governor George Wallace in 1968 and neighboring Georgia's Jimmy Carter in 1976. While conservative Democrats continued to hold most local offices into the 1990s, today there are almost no elected Democrats above the county level. No Democratic presidential candidate has received more than 40% of the county’s vote since 2000.

Twenty-one PTR employees relocated from Bristol. The company stated that it would hire an additional 30 workers in the first quarter of 2014, with a goal of having 120 employees by 2017. [36] 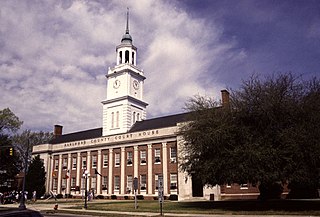 Marlboro County is a county located in the Pee Dee region on the northern border of the U.S. state of South Carolina. As of the 2020 census, its population was 26,667. Its county seat is Bennettsville. The Great Pee Dee River runs through it. Marlboro County comprises the Bennettsville, SC Micropolitan Statistical Area.

Marion County is a county located in the coastal plain of the U.S. state of South Carolina. As of the 2020 census, its population was 29,183. Its county seat is Marion. It is a majority-minority county.

Georgetown County is a county located in the U.S. state of South Carolina. As of the 2020 census, the population was 63,404. Its county seat is Georgetown. The county was founded in 1769. It is named for George III of the United Kingdom. 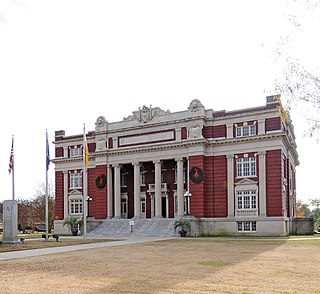 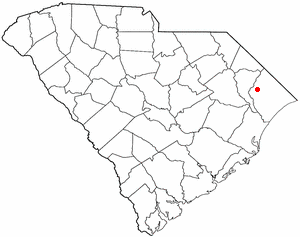 Aynor is a small town in Horry County, South Carolina, United States, south of Galivants Ferry. The population was 560 at the 2010 census and estimated in 2018 to be 934. Aynor High School consistently ranks as one of the best schools in Horry County and South Carolina. 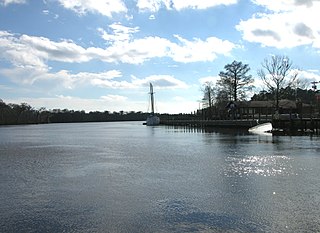 Bucksport is an unincorporated community and census-designated place (CDP) in Horry County, South Carolina, United States. The population was 876 at the 2010 census. It is a rural port on the Atlantic Intracoastal Waterway at the merger point with the Waccamaw River. The port has some services available for boaters and is also home to the Bucksport Restaurant.

Conway is a city in Horry County, South Carolina, United States. The population was 24,849 at the 2020 census, up from 17,103 in 2010 census. It is the county seat of Horry County and is part of the Myrtle Beach metropolitan area. It is the home of Coastal Carolina University. 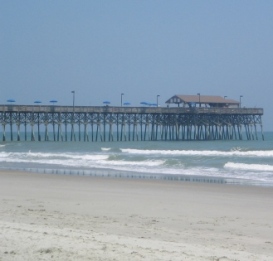 Garden City, sometimes known as Garden City Beach, is a census-designated place (CDP) in Horry County, South Carolina, United States. The population was 9,209 at the 2010 census. Garden City Beach is located directly south of Surfside Beach. The developed part of the beach extends south beyond the limits of the Garden City CDP, into Georgetown County, and ends on a peninsula at the mouth of Murrells Inlet. 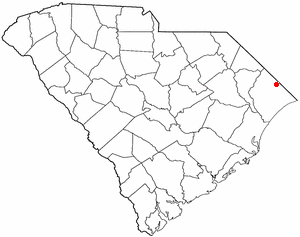 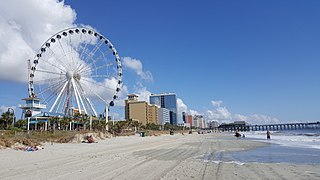 Myrtle Beach is a coastal city on the east coast of the United States in Horry County, South Carolina. It is located in the center of a long and continuous 60-mile (97 km) stretch of beach known as "The Grand Strand" in northeastern South Carolina.

Surfside Beach is a town in Horry County, South Carolina, United States. Its nickname is "The Family Beach". The population was 3,837 at the 2010 census, down from 4,425 in 2000. It is considered a part of the Grand Strand.

The Pee Dee is a region in the northeast corner of the U.S. state of South Carolina. It lies along the lower watershed of the Pee Dee River, which was named after the Pee Dee, a Native American tribe that historically inhabited the region.

The Grand Strand is an arc of beach land on the Atlantic Ocean in South Carolina, United States, extending more than 60 miles (97 km) from Little River to Winyah Bay. It is located in Horry and Georgetown Counties on the NE South Carolina coast. 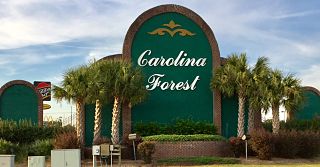 Carolina Forest is an unincorporated planned community and census-designated place (CDP) in Horry County, South Carolina, United States. It was first listed as a CDP in the 2020 census with a population of 23,342. 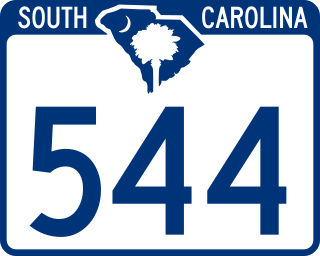 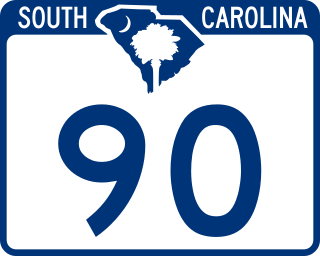 South Carolina Highway 90 (SC 90) is a 23.110-mile (37.192 km) state highway in Horry County, within the northeastern part of the U.S. state of South Carolina. It travels from Red Hill to Little River. It provides a direct connection from Conway to the northern Grand Strand in Little River.

Interstate 73 (I-73) is the designation for a future Interstate Highway in the US state of South Carolina. When completed, it will connect the Grand Strand area with the state's Interstate system.

The Waccamaw Indian People is a state-recognized tribe in South Carolina. They are based in Conway, South Carolina in Horry County.

Wikimedia Commons has media related to Horry County, South Carolina .
This page is based on this Wikipedia article
Text is available under the CC BY-SA 4.0 license; additional terms may apply.
Images, videos and audio are available under their respective licenses.