The Hospital El Salvador is a major hospital in San Salvador, El Salvador, and is planned to be the largest hospital in Latin America. The first phase was constructed between March and June 2020 as a conversion of the International Fair and Convention Center  [ es ] (Centro Internacional de Ferias y Convenciones, CIFCO) and forms part of El Salvador's response to the COVID-19 pandemic, exclusively receiving COVID-19 patients. Originally intended to be temporary, it was announced in June 2020 that the hospital conversion would be made permanent. In its first phase, the hospital has 400 available beds, a number which was expected to increase to 2,000 total beds upon completion of phase 3 of construction.

On 14 March 2020, President Nayib Bukele announced that a temporary hospital would be constructed in the CIFCO building, the country's main convention center. [2] At the time, there were no reported COVID-19 cases in El Salvador, but Bukele warned of a potential "collapse" of the health system when cases did arrive. [3] The Salvadorean transparency court, the Corte de Cuentas de El Salvador  [ es ], recommended in April that the new hospital be made permanent; the court's president floated the idea of moving the convention center to other facilities. [4] During construction, two workers of the Ministry of Public Works and Transportation  [ es ] tested positive for the virus. [5] Personnel worked in three shifts to accelerate work. [6]

The facility was inaugurated by the president on 22 June, [1] at which time he announced the hospital conversion would be permanent because of the large investment made. [7] Also at that time, the hospital was named the "Hospital El Salvador", representing the saving of lives that was hoped would take place there. The inauguration event was closed to journalists, and on multiple occasions officials denied newspaper photographers access to the site. [8] US$25 million was spent on the first phase of the conversion of the former convention center, [9] with the entire facility costing $75 million. [7] Covering 36,000 square metres (390,000 sq ft), the facility features a blood bank, morgue, and radiology area, among other amenities. [9] At the same time the hospital opened, the government began hiring to fill medical and administrative positions. [10] Prior to the pandemic, there were just 30 intensive care unit (ICU) beds in all of El Salvador; surge capacity had brought that number to 157 by the time the hospital opened. [11]

The University of El Salvador issued a press release upon the facility's inauguration, calling for the hospital to eventually become that university's medical school. [12] Since the opening, the transparency court has noted that the health ministry has not allowed auditors to access key areas, such as the morgue, and journalists have not been allowed access to verify that the former convention center has the necessary infrastructure to serve as a hospital. [13] In March 2021, the transparency court alerted to the existence of 63 anomalies in the construction process, including an initial lack of wastewater treatment facilities. [14]

Work on the third and final phase—consisting of entirely new construction—was reported to be slow-moving in October, two months after its planned completion; the government projected it would be in operation by January 2021, [15] though construction work was still ongoing in early March [16] and in early April; despite claims by the Minister of Public Works that it was finished at that time, workers could still be seen on the property. [17] The third phase opened on April 13 and was used as a mass vaccination site. [18]

An article published in The Lancet in December 2020 highlighted the hospital; however, the independent portal Salud con Lupa revealed that the article—in the journal's opinion section—was paid for by the government, which contracted with a consultant, Magdalena Serpa, to promote the facility. [19] An April 2021 letter to The Lancet questioned several aspects of the hospital's design. [20] It came out in November 2021 that the claimed architect of the hospital had not finished his architecture degree. [21]

The hospital in its first phase currently has 400 available beds—105 intensive care unit beds and 295 general hospital beds [9] —but the hospital is slated to increase capacity to 1,083 ICU beds [1] and 2,000 total [22] upon completion of phase 3 of construction. [9] The second and third phases were initially anticipated for completion in August, [7] though the latter has since been delayed several times, first to January 2021; [15] it still was not complete by early March. [16] The third phase will include the opening of a three-story building being erected on the former convention center parking lot. [23]

All COVID-19 patients being cared for at other hospitals were to be moved to the new facility to free up the national health system. [1] However, a July report by the national medical association said it was only operating at 25 percent of capacity. [24] The association's president further warned in December, with the third phase of the hospital still not complete, that the hospital system was being saturated with COVID-19 patients and that a system collapse was possible. [25]

El Salvador, officially the Republic of El Salvador, is a country in Central America. It is bordered on the northeast by Honduras, on the northwest by Guatemala, and on the south by the Pacific Ocean. El Salvador's capital and largest city is San Salvador. The country's population in 2021 is estimated to be 6.8 million. 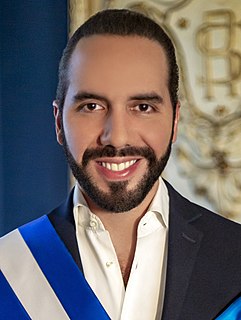 Nayib Armando Bukele Ortez is a Salvadoran politician and businessman who is the 43rd and current president of El Salvador. He has served since 1 June 2019 after winning the 2019 election. He ran as the candidate of the center-right Grand Alliance for National Unity (GANA) party and became the first president since José Napoleón Duarte (1984–1989) not to have been elected as the candidate of one of the country's two major political parties: the Farabundo Martí National Liberation Front (FMLN) and the Nationalist Republican Alliance (ARENA). He is also the founder of the political party Nuevas Ideas (NI). 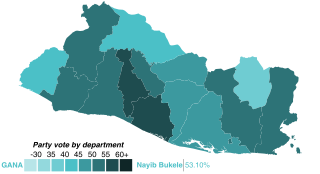 Presidential elections were held in El Salvador on 3 February 2019, with voters electing a President and Vice President for a five-year term. 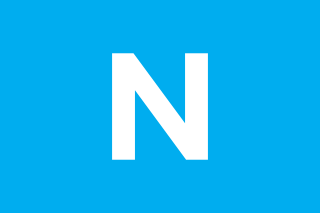 Nuevas Ideas is a Salvadoran populist political party founded on 25 October 2017 and based in San Salvador. It was founded by the current President of the Republic of El Salvador, Nayib Bukele. It was legalized by the Supreme Electoral Court (TSE) on 24 August 2018. Its first secretary general was Federico Gerardo Anliker and was later succeeded by Xavier Zablah Bukele.

Gabriela Roberta Rodríguez de Bukele is a Salvadoran educator, prenatal psychologist and the current First Lady of El Salvador, as the wife of the 46th President of El Salvador Nayib Bukele. She is also a professional ballet dancer and is part of the dance company Fundación Ballet de El Salvador.

The 2020 Salvadoran political crisis, commonly referred to as the numeronym 9F, was an incident in El Salvador on 9 February 2020. During the political crisis, Salvadoran President Nayib Bukele sent forty soldiers of the Salvadoran Army into the Legislative Assembly building in an effort to coerce politicians to approve a loan request of 109 million dollars from the United States for Bukele's security plan for the country. 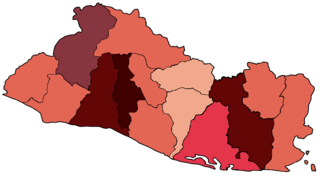 The COVID-19 pandemic in El Salvador is part of the worldwide pandemic of coronavirus disease 2019 caused by severe acute respiratory syndrome coronavirus 2. The virus was confirmed to have reached El Salvador on 18 March 2020. As of 19 September 2021, El Salvador reported 102,024 cases, 3,114 deaths, and 84,981 recoveries. As of that date El Salvador had arrested a total of 2,424 people for violating quarantine orders, and 1,268,090 people had been tested for the virus. On 31 March 2020, the first COVID-19 death in El Salvador was confirmed.

René Francis Merino Monroy is a Salvadoran vice admiral who serves as the incumbent Minister of Defense of El Salvador under President Nayib Bukele.

The Hospital de Emergencias Enfermera Isabel Zendal is a public hospital constructed during the COVID-19 pandemic in the Hortaleza district of Madrid, Spain. Having opened its doors in December 2020 after a construction period of only 100 days, it had become the city's main recipient of patients infected by the virus and the Spanish hospital with most COVID-patients by January 2021. It is named after Isabel Zendal, a Spanish nurse notable for participating in the 1803–06 Balmis Expedition which brought smallpox vaccination to South America and Asia.

Xavier Zablah Bukele is a Salvadoran politician who is the current President of the Nuevas Ideas political party. He is a cousin of Nayib Bukele, the incumbent President of El Salvador since 2019.

Mario Edgardo Durán Gavidia is a Salvadoran politician and businessman, has worked in the public administration since 2012, he was Minister of the Interior in the management of President Nayib Bukele, and since May 1st 2021 he is mayor of San Salvador.

Ernesto Alfredo Castro Aldana is a Salvadoran politician who is currently the incumbent President of the Legislative Assembly of El Salvador.

A political crisis in El Salvador occurred on 1 May 2021 when the Legislative Assembly of El Salvador voted to remove several judges from the Supreme Court and remove the Attorney General of El Salvador, both of which had been vocal opponents to the presidency of Nayib Bukele. The event has been referred to as a self-coup by the opposition and by news media outlets due to the action itself but also because of the 2020 Salvadoran political crisis in the year prior, where Bukele ordered soldiers into the Legislative Assembly, which has also been characterized as a self-coup.