Hostomel (Ukrainian : Гостомель) or Gostomel (Russian : Гостомель) is a town in Ukraine's Kyiv Oblast, north-western suburb to the capital city of Kyiv. Administratively, it is subordinated to Irpin Municipality. Its population is approximately 16,945 (2020 est.). [1]

The town is mainly known as the location of the Hostomel Airport, a major international cargo facility. There is also a Vetropack glass factory in Hostomel.

Branchville is a town in Southampton County, Virginia, United States. The population was 123 at the 2000 census. 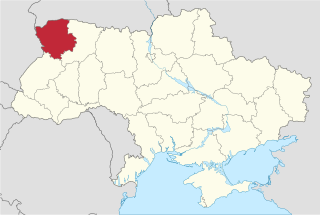 Volyn Oblast is an oblast (province) in northwestern Ukraine. Its administrative center is Lutsk. Kovel is the westernmost town and the last station in Ukraine of the rail line running from Kyiv to Warsaw. Population: 1,031,421

Kyiv Oblast or Kiev Oblast is an oblast (province) in central Ukraine. The administrative center of the oblast is the city of Kyiv, which is also the capital of Ukraine. Despite being in the center of the Kyiv Oblast, and hosting the governing bodies of the oblast, Kyiv is a self-governing city with special status and not under oblast jurisdiction.

Brovary is a city in Kyiv Oblast (Region) in northern Ukraine, an eastern suburb of the country's capital, Kyiv. Administratively, it is incorporated as a town of oblast significance. It also serves as the administrative centre of Brovary Raion (district), though administratively it does not belong to the raion. Its population is approximately 108,349 . 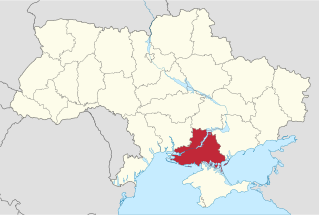 Kherson Oblast is an oblast (province) in southern Ukraine, just north of Crimea. Its administrative center is Kherson. The area of the region is 28,461 km2. Population: 1,027,913 This is considered to be the 'fruit basket' of the country, as many of the oblast's agricultural production is dispersed throughout the country, with production peaking during the summer months. 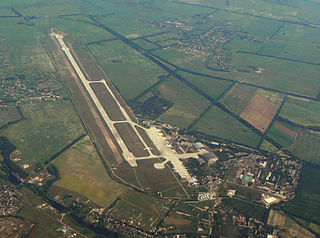 Antonov Airport, also known as HostomelAirport is an international cargo airport and testing facility in Ukraine, located near Hostomel, which is the northwestern suburb of Kyiv.

Koziatyn is a town in the Vinnytsia Oblast (province) in central Ukraine. Serving as the administrative center of the Koziatyn Raion (district), the town itself is not a part of the district and is separately incorporated as the town of oblast significance, and is located 75 kilometres (47 mi) from oblast capital, Vinnytsia, at around 49°43′00″N28°50′00″E. It lies on the banks of the Huyva River. Population: 22,951

Kyiv City Council, also known as Kyivrada, is the city council of Kyiv municipality, the highest representative body of the city community. The members of city council are directly elected by Kyivans and the council is chaired by the Mayor of Kyiv or the City Council Secretary. The deputies are elected for five-year terms. 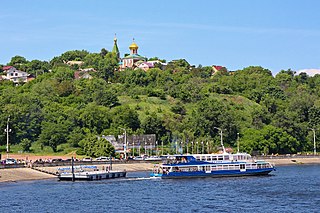 Vyshhorod is a city in Kyiv Oblast (region) in central Ukraine, the immediate northern suburb to the national capital Kyiv, located upstream along the Dnieper River. It serves as the administrative center of Vyshhorod Raion. Its population is approximately 30,997 .

Korostýšiv is a city in Zhytomyr Oblast, Ukraine. It serves as the administrative center of Korostyshiv Raion. Population: 24,822 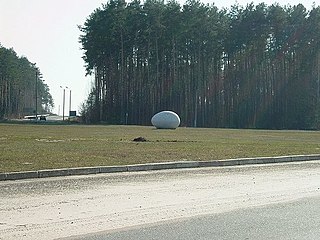 Ivankiv is an urban-type settlement in Kyiv Oblast (province) of Ukraine. It is situated on the left bank of the Teteriv River. It is the administrative center of Ivankiv Raion, and its population was 10,369. In 2001, the population had been 10,563.

Zgurivka is an urban-type settlement in Kyiv Oblast (region) of Ukraine. It is the administrative center of Zghurivka Raion. Population: 4,975 . In 2001, population was 6,615.

Kyiv-Sviatoshyn Raion was a raion (district) in Kyiv Oblast of Ukraine, adjacent to the city of Kyiv which served as the administrative center for the raion. The city of Kyiv itself did not belong to the raion. The raion was abolished on 18 July 2020 as part of the administrative reform of Ukraine, which reduced the number of raions of Kyiv Oblast to seven. The last estimate of the raion population was 210,123 . 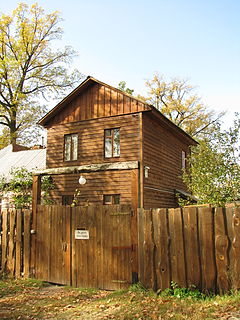 Vorzel is an urban-type village in Kyiv Oblast of Ukraine. Together with Hostomel and Kotsiubynske it is subordinated to the city council of Irpin. Population: 6,618 .

Pulyny, from 1935 until 2016 called Chervonoarmiisk, is an urban-type settlement in Pulyny Raion, Zhytomyr Oblast, Ukraine. It is the administrative center of Pulyny Raion. Population: 5,267

Dovbysh is an urban-type settlement in Baranivka Raion, Zhytomyr Oblast, Ukraine. The town is also known as Marchlewsk after the Polish-born Soviet politician and civil activist Julian Marchlewski. Population: 4,209 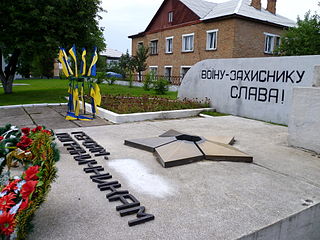 Novovolynsk is a town of oblast significance in Volyn Oblast, Ukraine. Novovolynsk, together with the urban-type settlement of Blahodatne, is incorporated as Novovolynsk Municipality, an administrative unit of a status equal to that of a district. Population: 51,010