The Hotel d'Angleterre is one of the first deluxe hotels in the world. Situated in the heart of Copenhagen, Denmark, it is located on Kongens Nytorv opposite Charlottenborg, the Royal Opera and Nyhavn. While its history dates back to 1755, it has been in its current building since a fire, in 1795, damaged the previous building beyond repair. [1] From 1872 to 1875, the building was significantly extended and refurbished [1] by the architects, Vilhelm Dahlerup [2] and Georg E.W. Møller [3] The hotel has long been considered the most prestigious and elegant hotel in the city. [4] Its name is French and means the "England Hotel".

The Hotel d'Angleterre re-opened in May 2013 following extensive restorations. The new d'Angleterre has 30 rooms and 60 suites. It also has a 1-star Michelin restaurant, "Marchal", [5] led by executive chef, Jakob de Neergaard, [6] a cocktail and champagne bar as well as a spa and health club. [1]

Condé Nast Traveler has included the Hotel D'Angleterre on its Gold List 2015 of the best hotels in the world. [7]

The kitchen of Hotel D'Angleterre is used as location for the fictional restaurant Maxim at 0:35:23 in the 1978 Olsen-banden film The Olsen Gang Sees Red . [8]

The protagonist (played by Paul Newman) stays on Hotel d'Angleterre on his way to the GDR in the 1966 Alfred Hitchcock spy film Torn Curtain and Hitchcock is in one of the scenes seen sitting in the lobby with a baby in his arms. [9]

The Designmuseum Denmark is a museum in Copenhagen for Danish and international design and crafts. It features works of famous Danish designers like Arne Jacobsen, Jacob Jensen and Kaare Klint, who was one of the two architects who remodeled the former Frederiks Hospital into a museum in the 1920s. The exhibition also features a variety of Chinese and German porcelain. 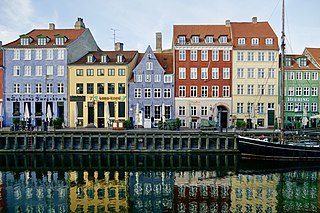 Nyhavn is a 17th-century waterfront, canal and entertainment district in Copenhagen, Denmark. Stretching from Kongens Nytorv to the harbour front just south of the Royal Playhouse, it is lined by brightly coloured 17th and early 18th century townhouses and bars, cafes and restaurants. The canal harbours many historical wooden ships.

Middelgrundsfortet or Fort Middelgrund, known as Ungdomsøen since 2015, is a sea fort located on an artificial island in the Øresund between Copenhagen and Malmö. The fortress is constructed at a point where the seabed is 7 meters below the water surface, and at the northern meeting point of the straits Kongedybet and Hollænderdybet. 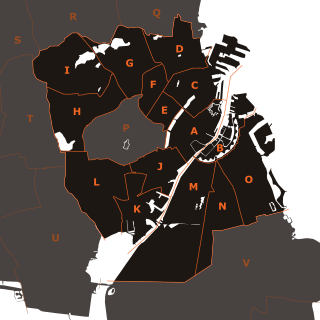 Vanløse is one of the 10 official districts of Copenhagen, Denmark. It lies on the western border of the municipality. Vanløse covers an area of 6.69 km², and has a population of 36,115, making Vanløse the smallest district of Copenhagen, by population.

Kastrup is a suburb of Copenhagen, Denmark, situated on the east coast of Amager in Tårnby Municipality. It is best known as the site of Copenhagen Airport. In Danish, the airport is often called Kastrup Lufthavn or Københavns Lufthavn, Kastrup. The population of Kastrup is approximately 43,000. 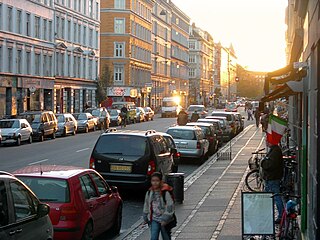 Rasmus Kofoed is a Danish chef and restaurateur who won the gold medal at the 2011 Bocuse d'Or, after previously taking the bronze medal in 2005 and the silver medal in 2007 in the same competition. He is the head chef and co-owner of Geranium, a 3-star Michelin restaurant in Copenhagen.

Jens Vilhelm Dahlerup was a Danish architect who specialized in the Historicist style. One of the most productive and noted Danish architects of the 19th century, he is behind many of the most known buildings and landmarks of his time and has more than any other single architect contributed to the way Copenhagen appears today.

The Jesus Church is a church situated just off Valby Langgade in the Valby district of Copenhagen, Denmark. It was commissioned by second-generation Carlsberg brewer Carl Jacobsen and designed by Vilhelm Dahlerup. Noted for its extensive ornamentation and artwork, it is considered to be one of the country's most idiosyncratic and unconventional examples of church architecture. The church was built as a mausoleum for Carl Jacobsen and his family and is located close to their former house as well as the former Carlsberg brewery site. Their sarcophagi lie in the crypt. Throughout the church, there are ornaments and inscriptions associated with the family.

Knippelsbro is a bascule bridge across the Inner Harbour of Copenhagen, Denmark, connecting Børsgade on Zealand-side Slotsholmen to Torvegade on Christianshavn. It is one of only two bridges to carry motor vehicles across the harbour in central Copenhagen, the other being Langebro.

Sluseholmen is an artificial peninsula in the South Harbour of Copenhagen, Denmark. It takes its name from Slusen, a lock immediately to the south, regulating water levels in the harbor. Previously the site of heavy industry and part of the Southern Docklands of Port of Copenhagen, Sluseholmen has, since the turn of the millennium, undergone massive redevelopment, transforming it into a mainly residential district known for its canals and maritime atmosphere. It is connected to Teglholmen by the Teglværk Bridge. 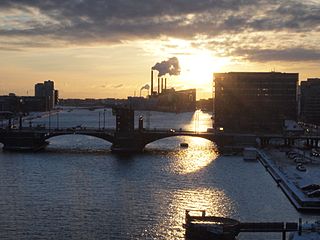 Langebro is a bascule bridge across the Inner Harbour of Copenhagen, Denmark, connecting Zealandside H. C. Andersens Boulevard to Amagerside Amager Boulevard. It is one of only two bridges to carry motor vehicles across the harbour in central Copenhagen, the other being Knippelsbro.

Havnegade is a waterfront promenade in central Copenhagen, Denmark, which runs between Knippelsbro and the mouth of the Nyhavn canal. Most of the street is lined with buildings from the 1860s and 1870s that were constructed as part of the redevelopment of the Gammelholm naval dockyards. It is the only place along Copenhagen's main harbourfront where residential buildings of that age face the water, although older warehouses and other industrial buildings elsewhere have been converted into residential use. The Modernist Bank of Denmark building is located at the western end of the street.

Kalvebod Brygge is a waterfront area in the Vesterbro district of Copenhagen, Denmark. The name also refers to a section of the Ring 2 ring road which follows the waterfront from Langebro in the north to the H. C. Ørsted Power Station in the south. The area is dominated by office buildings, Tivoli Conference Center, several hotels and the shopping centre Fisketorvet.

Roskildevej is a road between Copenhagen and Roskilde in the Danish capital area. The direct continuation of Vesterbrogade, which begins at Copenhagen's City Hall Square, the road begins at Pile Allé and continues through Frederiksberg, Valby, Rødovre, Glostrup, Albertslund, Taastrup and Hedehusene to Roskilde. The section between Hedehusene and Roskilde is now known as Københavnsvej and in Hedehusene and Glostrup it is simply known as Hovedgaden.

Enghave Brygge is a waterfront area in the Southern Docklands of Copenhagen, Denmark. It is located between Teglholmen to the south and Kalvebod Brygge to the north. Currently an abandoned industrial site, a plan for its redevelopment was adopted in July 2013. The most prominent landmark in the area is the H. C. Ørsted Power Station.

Pilestræde is a street in central Copenhagen, Denmark. It is a side street to the pedestrianized shopping street Strøget and commonly associated with the newspaper publishing house Berlingske Media, which has its headquarters in the street.

Stockholmsgade is a mainly residential street in central Copenhagen, Denmark. It follows the northwestern margin of Østre Anlæg, linking Sølvtorvet in the southwest with Oslo Plads at Østerport station in the northeast. The Hirschsprung Collection, an art museum, is located on the street.

Ny Østergade is a street in the Old Town of Copenhagen, Denmark, linking the Østergade section of the pedestrian street Strøget in the south with Christian IX's gade in the northwest. Together with the intersecting streets Grønnegade and Store Regnegade, its forms part of Copenhagen's most exclusive shopping districts.