House of Representatives of Belarus

Under the 1996 Constitution, the House of Representatives (Belarusian : Палата Прадстаўнікоў, Palata Pradstawnikow, Russian : Палата Представителей, Palata Predstaviteley) is the lower house of the parliament of Belarus.

It consists of 110 deputies elected to four year terms on the basis of direct electoral suffrage by secret ballot (art. 91). [1] It is a majoritarian system, with the outcome decided by overall majorities in single-member constituencies. Any citizen of 21 years is eligible for election (art. 92). The functions of the House are to consider draft laws and the other business of government; it must approve the nomination of a prime minister (art. 97); and it may deliver a vote of no confidence on the government (art. 97).

The upper house is the Council of the Republic.

The House of Representatives was established in 1997 to replace Supreme Soviet of Belarus. [2]

Bills adopted by the House of Representatives are sent to the Council of the Republic for consideration within five days, where they are considered within no more than twenty days.

Special powers accorded only to the House of Representatives are:

In practice, the House of Representatives has little real power. Notably, it has little control over government spending; it cannot pass a law to increase or decrease the budget without presidential consent. It has been dominated by supporters of President Alexander Lukashenko since its inception. Indeed, from 2004 to 2016, every seat in the chamber was occupied by supporters of the president. In any event, the Belarusian political system concentrates nearly all decision-making power in the president's hands, and there is almost no opposition to executive decisions.[ citation needed ]

In the aftermath of the 2019 Belarusian parliamentary election, the Belarusian opposition lost all of its seats in the assembly, as every single elected deputy was deemed to support President Alexander Lukashenko. [3]

Speakers of the House of Representatives

Belarus, officially the Republic of Belarus, formerly known by its Russian name Byelorussia or Belorussia, is a landlocked country in Eastern Europe. It is bordered by Russia to the northeast, Ukraine to the south, Poland to the west, and Lithuania and Latvia to the northwest. Its capital and most populous city is Minsk. Over 40% of its 207,600 square kilometres (80,200 sq mi) is forested. Its major economic sectors are service industries and manufacturing. Until the 20th century, different states at various times controlled the lands of modern-day Belarus, including the Principality of Polotsk, the Grand Duchy of Lithuania, the Polish–Lithuanian Commonwealth, and the Russian Empire.

The politics of Belarus takes place in a framework of a presidential republic with a bicameral parliament. The President of Belarus is the head of state. Executive power is exercised by the government, at its top sits a prime minister, appointed by the President. Legislative power is de jure vested in the bicameral parliament, the National Assembly, however the president may enact decrees that are executed the same way as laws, for undisputed time. Belarus's declaration of independence on 27 July 1990, did not stem from long-held political aspirations but from reactions to domestic and foreign events. Ukraine's declaration of independence, in particular, led the leaders of then Belarusian SSR to realize that the Soviet Union was on the brink of dissolving, which it did. 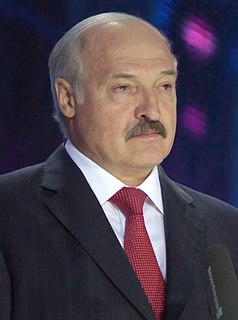 Alexander Grigoryevich Lukashenko or Aliaksandr Ryhoravich Lukashenka, is a Belarusian politician, who has served as President of Belarus since the establishment of the office on 20 July 1994. Before launching his political career, Lukashenko worked as director of a collective farm (kolkhoz), and served in the Soviet Border Troops and in the Soviet Army. He was the only deputy of the Belarusian parliament to vote against the 1991 dissolution of the Soviet Union.

The Communist Party of Belarus is a communist, Marxist–Leninist political party in Belarus. The party was created in 1996 and supports the government of president Alexander Lukashenko. The leader of the party is Tatsyana Holubeva. The party has had more seats in the National Assembly of Belarus than any other party since the 2000 Belarusian parliamentary election, the first national election it participated in.

The United Civic Party of Belarus is a liberal-conservative and liberal political party in Belarus. The party opposes the government of Alexander Lukashenko and has participated in the country's elections on a few occasions, but it did not have a single member in the Belarusian parliament until one member was elected during the 2016 elections. It claims that its lack of seats is due to the unfairness of the election process. 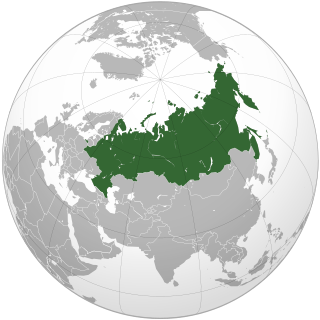 The Union State, also referred to as the Union State of Russia and Belarus, is a supranational union consisting of the Russian Federation and the Republic of Belarus.

The Republican Party of Labour and Justice, also known by its acronym RPTS is a socialist and social-democratic political party in Belarus founded by Ivan Antonovich in 1993. The chairman is Vasil Zadnyaprany. The party is considered to be supportive of the government of president Alexander Lukashenko.

The Constitution of the Republic of Belarus is the ultimate law of Belarus. Adopted in 1994, three years after the country declared its independence from the Soviet Union, this formal document establishes the framework of the Belarusian state and government and enumerates the rights and freedoms of its citizens. The Constitution was drafted by the Supreme Soviet of Belarus, the former legislative body of the country, and was improved upon by citizens and legal experts. The contents of the Constitution include the preamble, nine sections, and 146 articles. 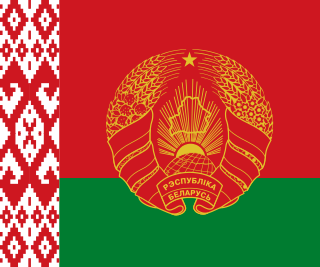 The All Belarusian People's Assembly is a general meeting of the Belarusian Government with industry leaders and other top officials from every sector of the government.

A four-question referendum was held in Belarus on 14 May 1995, alongside parliamentary elections. The four issues were the possibility of giving the Russian language equal status with Belarusian, whether new national symbols should be adopted, whether there should be economic integration with Russia and changes to the constitution that would allow early elections if Parliament systematically violated the constitution. According to official results, all four were approved by at least three-quarters of voters, with a turnout of 64.8%.

A seven-question referendum was held in Belarus on 24 November 1996. Four questions were put forward by President Alexander Lukashenko on changing the date of the country's independence day, amending the constitution, changing laws on the sale of land and the abolition of the death penalty. The Supreme Council put forward three questions on constitutional amendments by the Communist and Agrarian factions, local elections and the national finances. 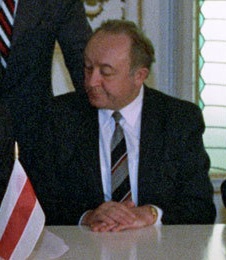 Vyacheslav Frantsevich Kebich is a political figure from Belarus.

Viktar Hanchar was a Belarusian politician who disappeared and was presumably murdered in 1999. He was born in the village of Radzichava, Slutsk Raion.

Parliamentary elections were held in Belarus on 23 September 2012. At stake were the 110 seats in the House of Representatives, the lower house of the National Assembly of Belarus. 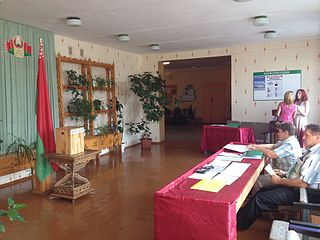 Parliamentary elections were held in Belarus on 11 September 2016.

Parliamentary elections were held in Belarus on 17 November 2019.