Kazuo's parents split up when he is young and he later experiences difficulties in his own relationships. Kazuo grows up to be a writer who wins the Naoki Prize for his literature. His son Jiro develops meningitis, leaving him paralyzed and mentally disabled. His wife Yoriko turns to spiritual religion and their marriage breaks down. He is invited to the construction of a memorial to his old friend Dazai in Aomori on August 9th, the day his son fell ill, and Yoriko says that the spirits tell her that evil will ensue that day at the hand of a woman. Kazuo takes his young assistant Keiko with him to Aomori and they consummate their affair. When he returns, he confesses to Yoriko that he was with Keiko in Aomori and she says that she knows because she knows everything he does. Yoriko leaves him and threatens a costly divorce, while his children reject Keiko. Kazuo considers selling his house but one stormy evening Yoriko returns and comforts the children. She tells Kazuo that she will stay with the children and he can leave.

Kazuo rents an apartment for himself and Keiko in Asakusa. One day a year later they find that it has been burgled by Kazuo's eldest son Ichiro from his first wife Ritsuko. Ichiro admits that he read Kazuo's book about his adultery and asks if he will write about the burglary. Keiko becomes pregnant but when Kazuo won't marry her she angrily says that she will have it aborted to continue her acting career and storms out. Mr. Nakajima from the publishing house tells Kazuo a rumor that Keiko has been sleeping with the power broker Mr. Shimamura, a man with underworld connections who may kill Kazuo. Despite the fact that his next manuscript is due the next day, Kazuo drowns his sorrows in alcohol and gets into a series of fistfights, waking up with his writing hand bandaged in the apartment of a helpful girl who calls herself Yoko. Without Keiko to help him, Kazuo asks Yoriko to type what he dictates in order to finish his manuscript by the pending deadline. The two then sorrowfully put Jiro in a care facility in order to simplify their own lives. Keiko has an abortion and returns to Kazuo, but when she learns that he had Yoriko help him with his manuscript she becomes incensed. Kazuo slaps her and she fights back. The neighbors break down the door because of the noise and ultimately Keiko kicks Kazuo out of the apartment.

Kazuo leaves Tokyo with cracked ribs and sails aimlessly across Japan while writing a serial about his journey. On the boat he encounters Yoko and accompanies her to her home on Nozaki Island, where he learns that her real name is Tokuko and that she was impregnated by her stepfather and had a stillborn child. As he is departing for Nagasaki, she jumps aboard his boat and runs away with him as her mother cries. They wander for three months living from fishing until Christmas, when she tells him that she is leaving him to accept a marriage proposal from a rich man from Singapore.

Kazuo goes to Keiko's apartment but finds that she is not there. He brings a yellowtail as a gift to Yoriko on New Year's Eve but must ask for money to pay for the taxi. On New Year's Day he finds his publishers gathered at his home to celebrate with Yoriko. During the celebrations he rushes out to visit Keiko but she has entered into a new love affair with her castmate Sasako. Yoriko calls Kazuo at Keiko's apartment to tell him that Jiro has died. Kazuo rushes to the hospital, where the doctor explains that Jiro dove headfirst into a wall imitating swimmers on television. Keiko sends Kazuo's possessions from their apartment back to his family home but keeps an old pair of shoes as a pretext to ask him to visit one last time. Keiko has emptied their old apartment and packed to leave. She gives him a photo they took of themselves in front of a waterfall in Aomori, then they drink one last glass of beer together. He suggests another but she says that she has an engagement. On the walk home, Kazuo throws away the shoes and tears up the photo. His wife finds him there while on her way to go shopping and his children attempt to identify the other person in the photo but she stops them. Kazuo asks her to buy some Chinese cabbage to pickle because he will be staying a while. She says that she thought he would say that because she knows everything he does. Kazuo lets all of his children climb on him and he happily carries them home.

Ōoku (大奥) is a Japanese drama produced by FujiTV. The story is set in the Edo period and is fiction set against a background of historical fact. The Ōoku was the part the ladies lived in Edo Castle. 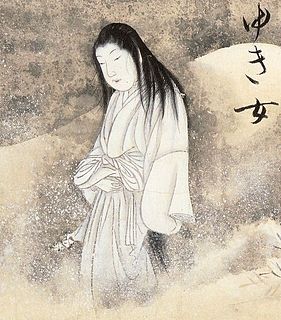 Yuki-onna is a spirit or yōkai in Japanese folklore that is often depicted in Japanese literature, films, or animation.

A Pale View of Hills (1982) is the first novel by Nobel Prize–winning author Kazuo Ishiguro. It won the 1982 Winifred Holtby Memorial Prize. He received a £1000 advance from publishers Faber and Faber for the novel after a meeting with Robert McCrum, the fiction editor.

An Autumn Afternoon is a 1962 Japanese drama film directed by Yasujirō Ozu. It stars Ozu regular Chishū Ryū as the patriarch of the Hirayama family who eventually realises that he has a duty to arrange a marriage for his daughter Michiko. It was Ozu's last film; he died the following year on the day he turned 60.

after the quake is a collection of six short stories by Japanese author Haruki Murakami, written between 1999 and 2000. First published in Japan in 2000, it was released in English as after the quake in 2002.

When a Woman Ascends the Stairs is a 1960 Japanese drama film directed by Mikio Naruse.

Yakuza Graveyard, known in Japan as Yakuza no Hakaba: Kuchinashi no Hana, is a 1976 Japanese yakuza film directed by Kinji Fukasaku. The screenplay by Kazuo Kasahara is based on a concept by Norimichi Matsudaira, Naoyuki Sugimoto and Kyo Namura.

Fall Guy is a 1982 Japanese film directed by Kinji Fukasaku, with art direction by Akira Takahashi. It was chosen as the Best Film at the Japan Academy Prize ceremony.

Kihachirō Kawamoto was a Japanese puppet designer and maker, independent film director, screenwriter and animator and president of the Japan Animation Association from 1989, succeeding founder Osamu Tezuka, until his own death. He is best-remembered in Japan as designer of the puppets for the long-running NHK live action television series of the Romance of the Three Kingdoms in the early 1980s and The Tale of the Heike in the 1990s but better-known internationally for his own animated short films, the majority of which are model animation but which also include the cutout animation Tabi and Shijin no Shōgai and mixed media, French-language Farce anthropo-cynique.

Hi no Sakana is a Japanese novel by Murō Saisei; it was first published in 1960, and was later adapted into a single episode TV drama that was broadcast on NHK Hiroshima in 2009. The story describes the interactions between an elderly author and a young staffer from a publishing company as they collaborate on a book cover design for the author's latest novel.

House of Wedlock a.k.a. Hour of Wedlock is a 1986 Japanese film directed by Kichitaro Negishi.

99 Years of Love 〜Japanese Americans〜 is a five-episode Japanese-language TV miniseries produced by TBS for its 60th anniversary announced in 3–7 November 2010, starring Tsuyoshi Kusanagi and Yukie Nakama, and sponsored by Toyota and Panasonic.

Nakoruru ~Ano hito kara no okurimono~ is an unfinished Japanese anime OVA series based on the video game of the same name, released for DVD on May 25, 2002. The OVA is directed by Katsuma Kanazawa with character designs from Yasuomi Umetsu, best known for doing the designs in Mezzo Forte and Kite. It was first slated for 13 episodes, cut to two, but lacked funding to finish the second. As a result, it only has a single episode released. Like the game, it hasn't been licensed anywhere outside Japan. 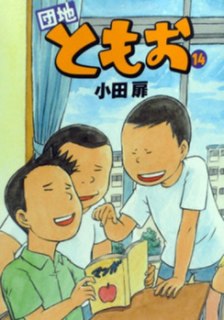 Danchi Tomoo is a Japanese manga series written and illustrated by Tobira Oda. An anime adaptation was announced in January 2013 and ran between April 2013 and February 2015. 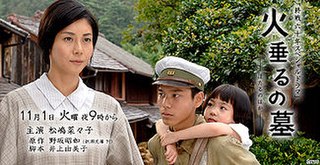 Grave of the Fireflies is a live-action TV drama of Grave of the Fireflies, made by NTV in Japan. It was produced in commemoration of the 60th anniversary of the end of World War II. The drama aired on November 1, 2005. Like the anime, the live-action version of Grave of the Fireflies focuses on two siblings, Seita and Setusko, struggling to survive the final days of the war in Kobe, Japan. Unlike the animated version, however, it tells the story from the point of view of their cousin and also deals with the issue of how the war-time environment could change a kind lady into a hard-hearted woman. The film stars Nanako Matsushima as the aunt and Mao Inoue as the cousin.

Kokou no Hito or The Climber is a Japanese manga series written by Shinichi Sakamoto and Yoshirō Nabeda and illustrated by Sakamoto, based on a novel by Jirō Nitta. It was originally serialized in Weekly Young Jump from 2007 to 2012, with the 170 chapters later published into 17 tankōbon volumes by Shueisha. It tells the story of introvert solo mountain climber Mori Buntarō—partially based on real-life mountain climber Buntarō Katō—who is introduced to sport climbing after being transferred to a new high school and later dedicates his entire life to professional mountain climbing, keeping the ascent of K2's East Face as his goal. The manga won an Excellence Prize in the manga division at the 2010 Japan Media Arts Festival. It also won Best Seinen Manga at the 2011 Prix Mangawa Awards.