Last updated August 02, 2022
This article is about the River Hron. For the Rector of Prag-Suchdol, see Jan Hron. For the Slovak wine grape, see Hron (grape).
River in Slovakia

The Hron (Slovak : Hron; German : Gran; Hungarian : Garam; Latin : Granus) is a 271-kilometre (168 mi) long left tributary of the Danube [1] and the second-longest river in Slovakia. It flows from its source in the Low Tatra Mountains (below Kráľova hoľa) through central and southern Slovakia, emptying into the Danube near Štúrovo and Esztergom. Major cities and towns on the Hron are Brezno, Banská Bystrica, Sliač, Zvolen, Žiar nad Hronom, Žarnovica, Nová Baňa, Tlmače, Levice, Želiezovce, and Štúrovo.

Hron is a popular destination of water tourism.

The name of the river was mentioned for the first time in 170, when Roman Emperor Marcus Aurelius wrote his Meditations at the Hron (Latin : Granus ) river. [3] The first recorded medieval name was Gron (1075). [3] From the 17th century until the 1930s, the river was used for wood transport.

Banská Bystrica is a city in central Slovakia located on the Hron River in a long and wide valley encircled by the mountain chains of the Low Tatras, the Veľká Fatra, and the Kremnica Mountains. With 76 000 inhabitants, Banská Bystrica is the sixth most populous municipality in Slovakia. The present town was founded by German settlers, however it was built upon a former Slavic settlement. It obtained the municipal privileges of a free royal town of the Kingdom of Hungary in 1255. The copper mining town acquired its present picturesque look in the Late Middle Ages when the prosperous burghers built its central churches, mansions, and fortifications. It is the capital of the kraj and the okres. It is also the home of Matej Bel University. As a historical city with an easy access to the surrounding mountains, Banská Bystrica is a popular winter and summer tourist destination. 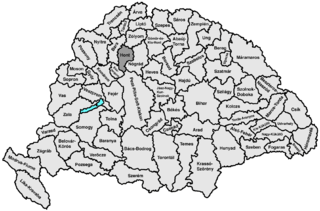 Hont County was an administrative county (comitatus) of the Kingdom of Hungary. Most of its territory is now part of Slovakia, while a smaller southern portion is part of Hungary.

The Ipeľ or Ipoly (Hungarian) is a 232-kilometre (144 mi) long river in Slovakia and Hungary, a tributary of the Danube River. Its source is in central Slovakia in the Slovak Ore Mountains. It flows south to the Hungarian border, and then southwest, west, and again south along the border until it flows into the Danube near Szob. 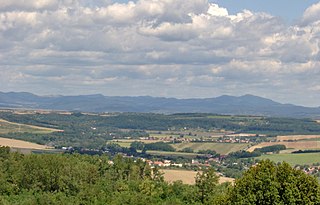 Brezno is a town in central Slovakia with a population of around 21,000. 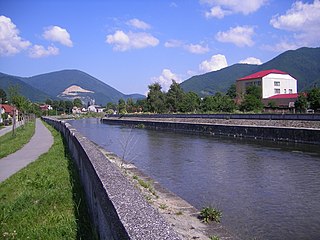 The Turiec is a river in north-western Slovakia. It is a tributary to the Váh, into which it flows near the city of Martin. Its source is in the Veľká Fatra Mountains. It is 67 km (42 mi) long and its basin size is 931 km2 (359 sq mi). The Turiec region is named after this river.

The Banská Bystrica Region is one of the eight regions of Slovakia. It is the largest region by area, and has a lower population density than any other region. The Banská Bystrica region was established in 1923; its borders were last adjusted in 1996. Banská Bystrica consists of 514 municipalities, 24 of which have town status. Its administrative center is the eponymous town of Banská Bystrica, which is also the region's largest town. Other important towns are Zvolen and Lučenec.

Rajčanka or Rajčianka is a river in northern Slovakia springing in Strážovské vrchy near Čičmany and pouring into Váh in Žilina. It is 46.6 km (29.0 mi) long and its basin size is 359 km2 (139 sq mi).

The Danubian Hills, also translated as Danubian Upland, is the north-eastern part of the Danubian Lowland in Slovakia often appearing as low rolling hills of prevalently eolic origin.

Telgárt is a village and municipality in Brezno District, in the Banská Bystrica Region of central Slovakia. 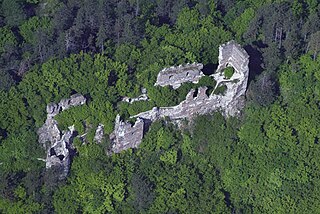 Žarnovica is a town and municipality in the Žarnovica District, Banská Bystrica Region in Slovakia. The town is situated in the Hron river valley. It has a population of around 6,000 people. 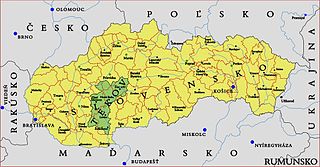 Tekov [Hungarian: Bars] is the traditional name of a region situated in southern and central Slovakia. Its territory encompasses the former Bars county, existing in the Kingdom of Hungary from the 11th century until 1918, though it is now administratively divided between the Nitra and Banská Bystrica regions. 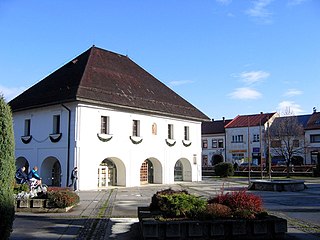 Rajec is a town in the Žilina District, Žilina Region in northern Slovakia. 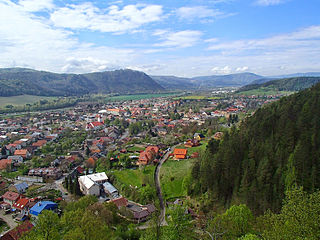 Slovenská Ľupča is the largest village in the Banská Bystrica District of central Slovakia. 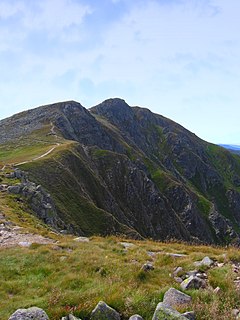 Low Tatras National Park is a national park in Central Slovakia, between the Váh River and the Hron River valleys. The park and its buffer zone cover the whole Low Tatras mountain range. The National Park covers an area of 728 km² and its buffer zone covers an area of 1,102 km², which makes it the largest national park in Slovakia. 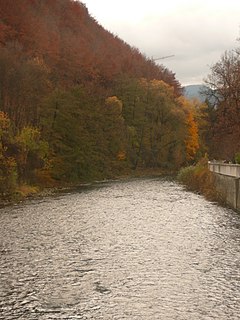 Urpín is a mountain in the city of Banská Bystrica, Slovakia. It is situated on the left bank of the Hron river, above the old town. Despite its low elevation of 510 m AMSL (1,673 ft), Urpín dominates the cityscape due to its proximity to the city center. The mountain offers a panoramic view of the Hron basin from the easternmost outskirts of Banská Bystrica to the town of Zvolen, as well as of the surrounding mountain ranges of the Low Tatras and the Veľká Fatra. It is accessible by several hiking trails from the center of Banská Bystrica. Historical monuments located on Urpín chart the turbulent history of the city built underneath this mountain. However, in defiance of its urban environs, the largely forested mountain is characterized by the surprisingly diverse fauna and flora.

Horehronie is a tourism and geographic region of Slovakia. It is situated in the Banská Bystrica and Brezno districts and encompasses the upper Hron River valley and the surrounding Low Tatra mountain ranges. The Slovak entry for the Eurovision Song Contest 2010 was "Horehronie", an ode to the region, performed by singer Kristína. 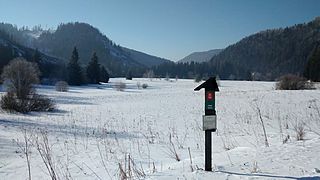