Hsaing waing musicians use a hemitonic and anhemitonic scale similar to the one used by Indonesian gamelan musicians. [1] The ensemble's principal instruments, including the pat waing, kyi waing, and hne, each play variations on a single melody (heterophony). [2]

The hsaing waing is the product of indigenous musical traditions, enriched with contact with a diverse array of musical traditions in neighboring Southeast Asian societies. The hsaing waing ensemble's principal instrument, a drum circle called pat waing , continues to use Indian drum-tuning methods, and is considered the last remaining vestige of Indian instrumentation in Southeast Asia. [1] Similar gong and chime ensembles are found in neighboring Thailand and Laos, where it is called piphat , and in Cambodia, where it is called pinpeat . However, these ensembles do not employ the use of a pat waing.

During the British colonial era, Sein Beda, a prominent musician, introduced various innovations to the ensemble, including decorating ensemble stands with traditional Burmese motifs and glass mosaic, introducing a jazz band to the ensemble, creating spotlights, and introducing musician uniforms. [5]

The hsaing waing ensemble includes a variety of percussion and wind instruments, including various gongs and drums: [6]

For more formal and classical performances, the ensemble may be accompanied by the saung gauk, the Burmese harp, the pattala , a Burmese xylophone, or the piano and violin, both of which were introduced during the colonial era. The Mon version of the hsaing waing ensemble also includes a crescent-shaped brass gong chime called la gyan hsaing in Burmese. [7]

The distinct repertoire of recognizable tunes accompanies of each of these types of hsaing waing ensembles. [8]

Music of the hsaing waing is characterized by dynamic, lively and sudden contrasts and shifts in rhythm, melody and tempo. [9] [10] The melody typically follows a regular meter of 4 to 8 beats. [8] Anyeint dance performances, as well as nat gadaw and marionette puppet performances, are accompanied by the music of the hsaing waing, with the sudden shifts in musical rhythm reflected in the dancer's changing poses. [10] The melody is shaped by tones; a complex system of pitches, principal and auxiliary tones, and melodic phrase terminals (cadential formulas), ornaments, and the vocal lines are associated with particular modes, which are context-driven (depending on environment and stage situations) and express varying emotions. [3] The gong instrumentation provide repetitive motifs (see ostinato) during the course of a performance. [3]

By contrast, classical singing of the Mahāgīta tradition derived from royal chamber music, which is characterized by a quieter and more restrained musical style, is accompanied by either a classical ensemble or a single saung gauk. [11] 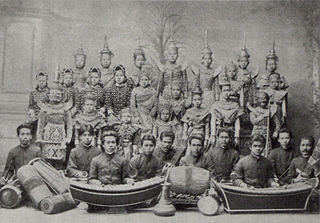 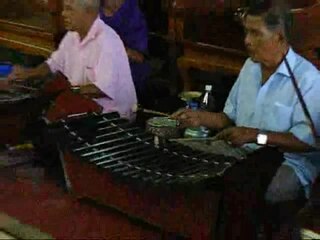 A piphat is a kind of ensemble in the classical music of Thailand, which features wind and percussion instruments. It is considered the primary form of ensemble for the interpretation of the most sacred and "high-class" compositions of the Thai classical repertoire, including the Buddhist invocation entitled sathukan as well as the suites called phleng rueang. It is also used to accompany traditional Thai theatrical and dance forms including khon, lakhon, and shadow puppet theater.

The music of Myanmar shares many similarities with other musical styles in the region. Traditional music is melodic, having its own unique form of harmony, often composed with a 4
4 (na-yi-se), a 2
4 (wa-let-se) or a 8
16 time signature. In Burmese, music segments are combined into patterns, and then into verses, making it a multi-level hierarchical system. Various levels are manipulated to create a song. Harmony in Mahagita is known as twe-lone, which is similar to a chord in western music. For example, C is combined with F or G. 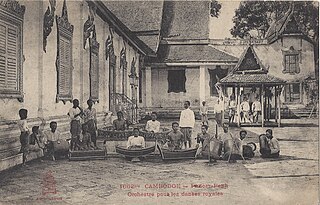 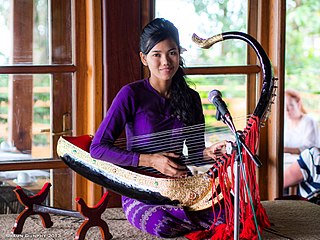 The saung, is an arched harp used in traditional Burmese music. The saung is regarded as a national musical instrument of Burma. The saung is unique in that it is a very ancient harp tradition and is said to be the only surviving harp in Asia.

The pat kon is a graduated brass gong chime associated with the Mon people of mainland Southeast Asia. The pat kon has been absorbed into the traditional musical ensembles of neighboring Southeast Asian societies.

Kyaw Kyaw Naing is a modern Burmese traditional musician who is trying to bring this music to the world stage. He is a master of the pat waing or saing waing, a traditional Burmese drum-circle instrument; the player sits in the middle of a horseshoe-shaped shell made of elaborately carved wood and decorated with gold leaf.

Pi is the generic term for any of a variety of quadruple reed oboes used in the traditional music of Thailand, piphat. It is very similar in construction and playing technique to the Cambodian sralai. 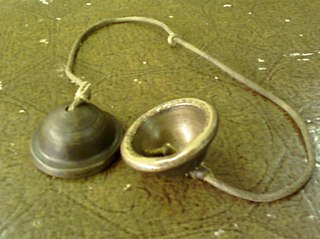 Ching are finger cymbals played in Cambodian and Thai theater and dance ensembles. 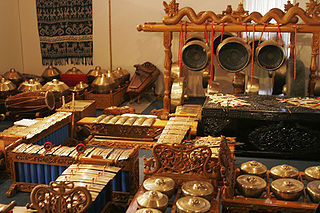 A gong chime is a generic term for a set of small, high-pitched bossed pot gongs. The gongs are ordinarily placed in order of pitch, with the boss upward on cords held in a low wooden frame. The frames can be rectangular or circular, and may have one or two rows of gongs. They are played by one to four musicians, each using two padded sticks to strike them. They are an important instrument in many Southeast Asian musical ensembles, such as Indonesian gamelan, kulintang, or Thai pi phat. For this reason, such ensembles are sometimes called "gong chime ensembles" or "gong chime orchestras," and the broad variety of music "gong chime music."

The pattala is a Burmese xylophone, consisting of 24 bamboo slats called ywet(ရွက်) or asan (အဆံ) suspended over a boat-shaped resonating chamber. It is played with two padded mallets. The pattala is tuned similar to the diatonic scale.

The pat waing or pat wang is a drum circle instrument used in the Burmese folk musical ensemble. This instrument has been adapted into the Thai piphat mon ensemble, where it is called poeng mang. 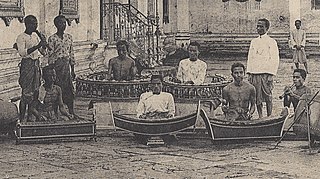 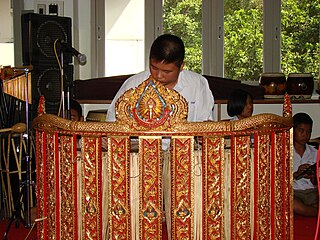 The poeng mang,, known as poeng mang khok (เปิงมางคอก) when used as a set, is a traditional Thai drum of Mon origin and in Myanmar called Pat waing, played by Mon people. It is a percussion instrument, used to furnish the rhythms of music. They are set of leather faced drums which plays an important role in the piphat Mon ensemble. They are played to teasingly interrupt the rhythms with the Taphon mon adding a joyful mood to the music. 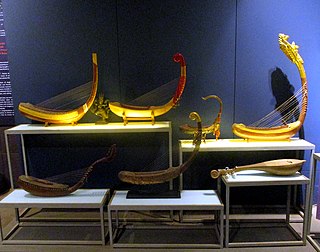 The pin is a Cambodian harp, one of the most historically important instruments in Cambodian music. The instrument went extinct c. 1500s, and is now being restored in modern times. Its historical importance is emphasized by the very name for Cambodian classical music, pin-peat. After the pin was no longer being used, Cambodians continued to use the instrument's name for classical music into the present era. When the pin was no longer being used, the tonal range of other instruments was expanded, possibly to compensate. Burmese saung gauk and roneats had more keys for the chromatic scale and the number of gongs in the kong von thom and kong toch "more than doubled in number since the musician depicted on the Angkorian carvings." 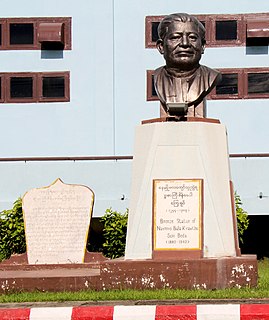 Sein Beda was a prominent Burmese classical musician based in Mandalay, Burma. 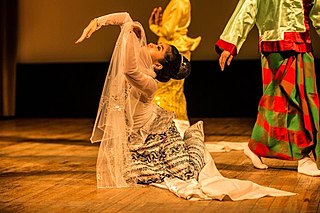 The Mandalay Thabin refers to the Mandalay-based dramatic arts industry, including yoke thé, anyeint, zat pwe, etc., flourished since the late Konbaung era, during the reigns of King Mindon and King Thibaw.