Hualien County (Mandarin Wade–Giles: Hua¹-lien² Hsien⁴; Pīnyīn: Huālián Xiàn; Hokkien POJ: Hoa-lian-koān or Hoa-liân-koān; Hakka PFS: Fâ-lièn-yen; Amis: Kalingko) is a county on the east coast of Taiwan. It is the largest county by area, yet due to its mountainous terrain, has one of the lowest populations in the country. The county seat and largest city is Hualien City.

Most of the population resides in the Huadong Valley, which runs north to south, sandwiched between the Central and Hai'an mountain ranges. Due to the rural nature of the county, Hualien attracts many visitors for its natural environment, which includes Taroko Gorge, Qingshui Cliff and Qixingtan Beach.

During Taiwan's Japanese colonial period (1895-1945) the island's Japanese governors opted not to transliterate the name "Kiray" because the Japanese pronunciation of the word resembled the Japanese word for "dislike, disgusting" (嫌い, kirai). The official name became Karenkō (花蓮港, Karenkō). Karenkō Prefecture consisted of modern-day Hualien County. Toward the end of World War II the Governor-General of Taiwan moved many Japanese residents of Taiwan to the area to develop agriculture.

After the handover of Taiwan from Japan to the Republic of China in October 1945, Hualien was established as a county named Hualien County of Taiwan Province on 9 January 1946. In 1951 Hualien was the first county in Taiwan to be governed according to the ROC local autonomy law. Today the Hualien area serves as the key population centre on the east coast as well as the one of five main life circle regions in Taiwan, together with Taipei, Taichung, Tainan and Kaohsiung.

On 2 April 2021, a Taroko Express derailed at the north entrance of Qingshui Tunnel after striking an unattended flatbed truck that had fallen onto the tracks. The accident is the deadliest train accident in Taiwan since 1948, with at least 50 passengers reported dead and more than 150 injured.

Hualien County is situated in eastern Taiwan Island. It faces the Pacific Ocean towards Japan (Okinawa Prefecture) to the east, Central Mountain Range to the west bordering Taichung City, Nantou County and Kaohsiung City, Yilan County to the north and Taitung County to the south. It stretches around 137.5 km (85.4 mi) from north to south with its width ranging from 27 to 43 km (17 to 27 mi) long from east to west. Its area is about 4,628.57 km2 (1,787.10 sq mi) and occupies one eighth of Taiwan's total area.

Despite its vast area, only 7% of the county area is populated. The remaining area is occupied by rivers (7%) and mountains (87%). Mountains are composed of Central Mountain Range in the west and Hai'an Range in the east. The main rivers in the county are the Hualian River, Xiuguluan River and their branches. The plains stretch along the valleys between both mountain ranges with a width around 3–6 km (1.9–3.7 mi). Due to the restriction of its landscape, Hualien people reside mostly on the alluvial fans of the Huatung Valley plains. [3]

Hualien County is divided into 1 city, 2 urban townships, 7 rural townships and 3 mountain indigenous townships. Some towns have Japanese names because these towns were named by Japanese during the Japanese ruling period from 1895 to 1945. Hualien City is the county seat and houses the Hualien County Government and Hualien County Council. [4]

Colors indicate the common language status of Hakka and Formosan languages within each division.

Hualien County voted one Democratic Progressive Party legislator to be in the Legislative Yuan during the 2016 Republic of China legislative election. [6] The incumbent Magistrate of the county is Hsu Chen-wei of the Kuomintang.

Hualien County has 333,392 inhabitants as of December 2014 and is divided into 1 city and 12 townships. Its late development means that many aboriginal cultures such as Amis, Atayal, Bunun, Truku, Sakizaya and Kavalan are well-preserved. As of 2014, aborigines make up 27.5% of the population of Hualien County (about 91,675). [8] The Hakka people comprise about 30% of inhabitants. [1]

The county has seen negative population growth since the early 2000s due to emigration to other places outside Hualien County, with an average reduction of 1,393 people per year over the past 18 years.

According to a 2015 survey on national happiness index, Hualien County was rated as the happiest place to live in Taiwan among other 20 counties and cities due to the residents happiness driven by strong levels of satisfaction with work-life balance, living condition, education, environmental quality and the performance of the local government. [9]

The internationally famous Buddhist Tzu Chi foundation is headquartered in Hualien City. There are also many temples around the county. Buddhism and Folk religions are popular in Hualien County. [10] Hualien County also has the highest concentration of Roman Catholics in Taiwan at 9.46% of the population. [11]

Hualien County is home to the Hualien Stadium and Hualien Baseball Stadium.

Because of its awesome scenic view, fresh air, fine weather, and plenty of well-maintained bike trails, Hualien County is a popular destination for cyclist enthusiasts and marathon runners. Many cycling tournaments and marathon events are held each year in Hualien County. For example, Taiwan KOM Challenge [12] and Taroko Gorge Marathon. [13]

There is cement mining activity in the county. The Asia Cement Corporation plant in Xincheng Township contributes nearly 29% of Taiwan's annual cement production. [14]

The Hualien County Department of Education lists in all 6 institutions of higher learning within the county's borders as well as 15 high schools, 35 junior high schools and 151 elementary schools, though some of the listed elementary campuses have been closed for years due to their remote location or to low enrollments. Hualien County is home to National Dong Hwa University, Tzu Chi University, Taiwan Hospitality and Tourism University, Tzu Chi University of Science and Technology and Dahan Institute of Technology.

Due to the power plant, Hoping is also the location of a deep water bulk cargo port. Hoping port is located in Hoping Village, Xiulin Township. [15]

Night markets in the county are Dongdamen Night Market. 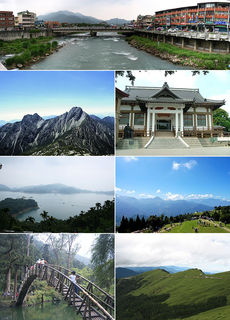 Nantou County is the second largest county of Taiwan, located in the central part of the country. It is also the only landlocked county in Taiwan. Its name derives from the Hoanya Taiwanese aboriginal word Ramtau.

Taroko National Park is one of the nine national parks in Taiwan and was named after the Taroko Gorge, the landmark gorge of the park carved by the Liwu River. The park spans Taichung Municipality, Nantou County, and Hualien County and is located at Xiulin Township, Hualien County, Taiwan.

Pingtung County is a county in Southern Taiwan. It has a warm tropical monsoon climate and is known for its agriculture and tourism. Kenting National Park, Taiwan's oldest and largest national park, is located in the county. The county seat is Pingtung City.

The Taitung Line, also known as the Hua-Tung line, is the southern section of the Eastern Line of the Taiwan Railways Administration. The line starts at the Hualien station and ends at the Taitung station. It is 161.5 km long, including the main segment of 155.7 km between Hualien and Taitung.

The Huadong Valley or Hualien–Taitung Valley, also known as East Rift Valley or the Longitudinal Valley, is a long and narrow valley located between the Central Mountain Range and the Coastal Mountain Range. It is also recognized as a plain area which stretches for about 180 kilometers near the eastern coast of Taiwan, passes from Hualien City at the north to Taitung City at the south. It was called Nakasendō Plain or simply Nakasendō during the era of Japanese rule.

Fenglin Township, is an urban township in central Hualien County, Taiwan. It is located in Huatung Valley bordering Shoufeng Township on the north and Guangfu Township on the south. It has a population of around 11,237 inhabitants in 12 villages.

Shoufeng Township is a rural township in Hualien County, Taiwan. The township sits in the north segment of Huadong Valley between Taiwan's Central Range and Hai'an Range near the Pacific Ocean. The township is best known as the location of National Dong Hwa University (NDHU), a national research university and famous tourist attraction in East Taiwan.

Ji'an Township, is a rural township in Hualien County, Taiwan. It has 18 villages and a population of 83,750 inhabitants.

Hualien is a railway station in Hualien City, Hualien County, Taiwan served by Taiwan Railways Administration. It is the terminal station of North-link line and the starting station of Taitung line. 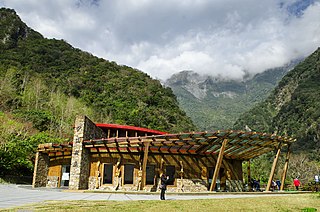 Xiulin Township / Sioulin Township is a mountain indigenous township of Hualien County, Taiwan. It is located northwest of Hualien City, and is the largest township in Taiwan by area (1,641.86 km²) with 9 villages. It has a population of 15,494, most of which are the indigenous Taroko people.

Ruisui Township is a rural township located in southern Hualien County, Taiwan, and has a population of 12,107 inhabitants in 11 villages.

Guangfu Township is a rural township located in mid Huatung Valley between Central Mountain Range and coastal Range of Hualien County, Taiwan. The indigenous Amis people make up about half of the population. The main economical activity is agriculture. 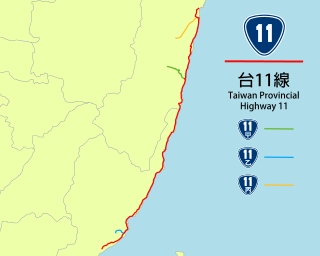 Provincial Highway 11, also known as Hualien-Taitung Coastal Highway for its connection between Hualien County and Taitung County is located on the east coast of Taiwan. This highway, which is 178.229 km, begins in Hualien City and ends in Taitung City. It also has 3 branch lines. The East Coast National Scenic Area and Farglory Ocean Park are also located on this highway. It was called Tōkaidō during Japanese rule period.

Hualien City is a county-administered city and the county seat of Hualien County, Taiwan. It is located on the east coast of Taiwan on the Pacific Ocean, and has a population of 106,368 inhabitants.

Wanrong Township or Wanrung Township is a mountain indigenous township located in the west of Hualien County, Taiwan, and has a population of 6,530 inhabitants and 8 villages. 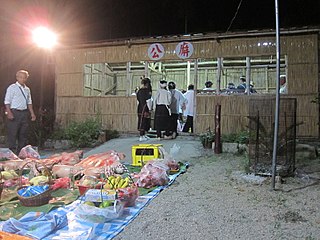 Dazhuang is a community located in Tungli Village, Fuli Township in Hualien County, Taiwan. Dazhuang used to be an old community of Amis, until 1845 when some plain indigenous people started to migrate from Southern Taiwan to here. It was the most populous community in Fuli between Qin dynasty and Japanese occupation period, and so called the name Tuā-tsng, which means "a big village" in Taiwanese.

The Liwu River is a river entirely located in Xiulin Township, Hualien County, Taiwan. The deep gorges of Taroko National Park are formed by this river.