Hudiksvall (Swedish pronunciation:  [hɵdɪksˈvalː] ) is a city and the seat of Hudiksvall Municipality, in Hälsingland, Gävleborg County, Sweden with 15,015 inhabitants in 2010. [1] Hudiksvall is also known as Glada Hudik (English: Happy Hudik), a term that originated in the 19th century as word spread of its friendly hospitality and its lively social life. [2] The city is located along the E4, on the east coast of Sweden deep inside the bay Hudiksvallsfjärden, about 80 km south of Sundsvall and about 130 km north of Gävle. Hudiksvall is Sweden's 76th largest urban area and also the largest urban area in Hälsingland. Around Hudiksvall within the municipality lay the communities of Delsbo, Iggesund, Enånger, Njutånger, Näsviken and Sörforsa.

Hudiksvall was founded by King John III of Sweden in 1582. He had the inhabitants moved from the town Hudik, where his father Gustav Vasa had collected the trade- and craftsmen of Hälsingland in order to more easily collect taxes, to Hudiksvall by the shores of the bay. [3]

At the time, fishing and the trading of furs, skins, iron, copper and wood products were the main sources of income, and the city flourished. But the city lost its privileges for foreign trading in 1636, and its development was somewhat stalled for the next two centuries.

It has been damaged by fires some 10 times, the most severe when it was burnt by the Russians during the Russian Pillage of 1719-1721 in 1721, whereafter only the church remained. The current street structure was applied in 1792 as part of the reconstruction necessitated by another fire.

Hudiksvall has a humid continental climate with a significant maritime influence. In the 1961-1990 reference period it was just above subarctic, but that border region has since moved somewhat further north. Considering how far north it is, the climate is comparatively mild, with warm summers and moderated winters with daytime highs often hovering around the freezing point. The town is the northernmost in Sweden to have January average highs above −1 °C (30 °F) and is the coastal tipping point for regular average highs of 22 °C (72 °F) in summer. By east coast standards, Hudiksvall has a relatively wet climate with an annual precipitation rate averaging 646 millimetres (25.4 in) sometimes resulting in heavy snowfall during winters.

The city has three exercise trails on either side of the town: in the West, at Fridhem, in the North, just above the gymnasium, and in the East at Björkberg, of which the East has hosted the Svenska mästerskap (English: Swedish Championship) in cross country skiing a few times, most recently January 2005. In the western part of town there is also a ski slope, Hede, and in the North lies the trotting track Hagmyren.

The city center features a swimming pool with a gym, a solarium and an indoor sports hall. In 1939 Glysisvallen was built to include a soccer field, stadium, running track and outdoor hockey rink. In 1989 Hudiksvall received their first indoor hockey hall in the area, and in 2007 an artificial soccer field was built at Glysisvallen. In 1999, Hudiksvall also received a large modern indoor sports hall in the former sawmill located in the industrial area Håstaholmen.

In addition, Hudiksvall have the sports club Strands IF, the football club ABK, the hockey club HHC and the floor hockey club Hudik/Björkberg. The most successful in recent years is the Hudiksvall sports club's ski section whose sprint skier Björn Lind won two Olympic gold medals in Turin in 2006. In the 2010 Winter Olympics in Vancouver Daniel Richardson won an Olympic gold medal in the team sprint. The 2010 Vasalopp was won by Jörgen Brink.

Outside of Hudiksvall in Forsa socken, the Storbergsmasten is located. Storbergsmasten is a 335 metre tall guyed mast for FM- and TV-transmission, which shares the first place as Sweden's tallest structure together with three other masts of same height.[ citation needed ] 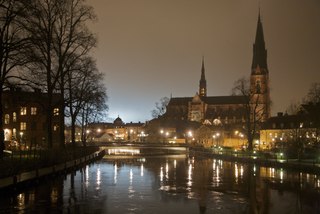 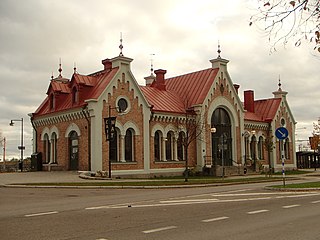 Hudiksvall Municipality is one of Sweden's 290 municipalities, situated in Gävleborg County, east central Sweden. Its seat is in the city Hudiksvall. 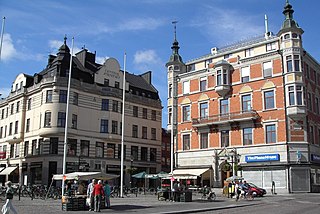 Linköping is a city in southern Sweden, with around 105,000 inhabitants as of 2021. It is the seat of Linköping Municipality and the capital of Östergötland County. Linköping is also the episcopal see of the Diocese of Linköping and is well known for its cathedral. Linköping is the center of an old cultural region and celebrated its 700th anniversary in 1987. Dominating the city's skyline from afar is the steeple of the cathedral, Domkyrka.

Hälsingland, sometimes referred to as Helsingia in English, is a historical province or landskap in central Sweden. It borders Gästrikland, Dalarna, Härjedalen, Medelpad and the Gulf of Bothnia. It is part of the land of Norrland.

Edsbyn is a locality and the seat of Ovanåker Municipality, Gävleborg County, Sweden with 3,985 inhabitants in 2010. It is located in the historical province of Hälsingland.

Sveg is a locality and the seat of Härjedalen Municipality in Jämtland County, Sweden with 2,547 inhabitants in 2010. 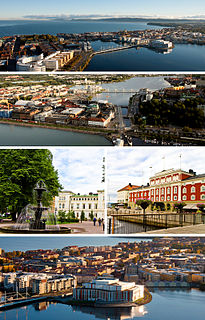 Jönköping is a city in southern Sweden with 112,766 inhabitants (2022). Jönköping is situated at the southern end of Sweden's second largest lake, Vättern, in the province of Småland. 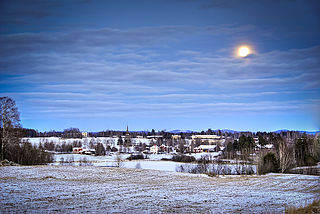 Delsbo is a locality in Hudiksvall Municipality, Gävleborg County, Sweden, with 2,192 inhabitants in 2010. It is situated some 25 kilometers west of Hudiksvall, in the vicinity of the two lakes of Dellen. The town is known for its assembly of musicians at Delsbo Ancient Farm every year. 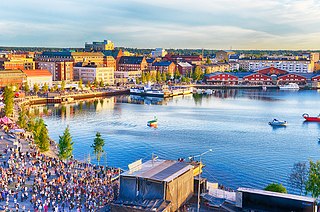 Luleå is a city on the coast of northern Sweden, and the capital of Norrbotten County, the northernmost county in Sweden. Luleå has 48,728 inhabitants in its urban core (2018) and is the seat of Luleå Municipality. Luleå is Sweden's 25th largest city and Norrbotten County's largest city.

Gällivare is a locality and the seat of Gällivare Municipality in Norrbotten County, province of Lapland, Sweden with 8,449 inhabitants in 2010. The town was founded in the 17th century. Together with nearby towns Malmberget and Koskullskulle it forms a conurbation with some 15,000 inhabitants. This conurbation is the second northernmost significant urban area of Sweden after Kiruna.

Ulricehamn is a locality and the seat of Ulricehamn Municipality, Västra Götaland County, Sweden, with 9,787 inhabitants in 2010. 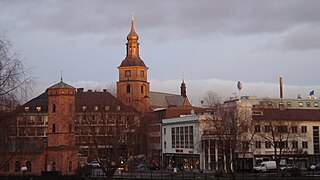 Falun is a city and the seat of Falun Municipality in Dalarna County, Sweden, with 37,291 inhabitants in 2010. It is also the capital of Dalarna County. Falun forms, together with Borlänge, a metropolitan area with just over 100,000 inhabitants.

Avesta is a locality and the seat of Avesta Municipality in Dalarna County, Sweden, with 11,949 inhabitants in 2015. 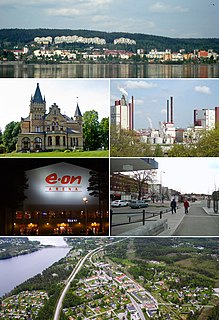 Sundsvall is a city and the seat of Sundsvall Municipality in Västernorrland County, Sweden. It has a population of 58,807 as of 2020; more than 95,000 live in the municipal area. It is Sweden's 21st largest city by population.

Wikimedia Commons has media related to Hudiksvall .
KML file (edit • help)
w:sv:Wikipedia:KML/Hudiksvall
KML is from Wikidata
This page is based on this Wikipedia article
Text is available under the CC BY-SA 4.0 license; additional terms may apply.
Images, videos and audio are available under their respective licenses.