Downs was born in 1921 in Akron, Ohio to Edith (née Hicks) and Milton Howard Downs, who worked in business. [9] He was educated at Lima Shawnee High School in Lima, Ohio; Bluffton College, a Mennonite school in Bluffton, Ohio; and Wayne State University in Detroit, Michigan, during the period 1938–41 [10] .

He worked as a radio announcer and program director at WLOK in Lima, Ohio, after his first year of college. [11] In 1940 he moved on to WWJ in Detroit. Downs served in the United States Army during World War II in 1943 and then joined the NBC radio network at WMAQ as an announcer in Chicago, Illinois, where he lived until 1954. [11] While at WMAQ Downs also acted, including as the "co-pilot" in the "Uncle Ned's Squadron" program in 1951. He married a coworker, Ruth Shaheen in 1944, three days after his 23rd birthday. He also attended Columbia University in New York City during 1955–56 [12] .

Downs made his first television news broadcast in September 1945 from the still experimental studio of WBKB-TV (now WBBM-TV), a station then owned by the Balaban and Katz theater subsidiary of Paramount Pictures.

Downs became a television regular, announcing for Hawkins Falls in 1950, the first successful television soap opera, which was sponsored by Lever Brothers Surf detergent. He also announced the Burr Tillstrom children's show Kukla, Fran and Ollie from the NBC studios at Chicago's Merchandise Mart after the network picked up the program from WBKB. In March 1954, Downs moved to New York City to accept a position as announcer for Pat Weaver's The Home Show starring Arlene Francis. That program lasted until August 1957. He was the announcer for Sid Caesar's Caesar's Hour for the 1956–57 season, and one of NBC Radio's Monitor "Communicators" from 1955–1959. [13] Downs became a bona fide television "personality" as Jack Paar's announcer on The Tonight Show from mid-1957, when he replaced Franklin Pangborn, until Paar's departure in March 1962, [11] and then continued to announce for The Tonight Show until the summer of 1962, when Ed Herlihy took the announcing reins. Herlihy held that post until October 1, 1962, when Johnny Carson took over the show, and brought Ed McMahon as his announcer. [14]

On August 25, 1958, Downs concurrently began a more than ten-year run hosting the original version of the game show Concentration . [3] Also, he hosted NBC's Today Show for nine years from September 1962 to October 1971, plus co-hosting the syndicated television program Not for Women Only with Barbara Walters in 1975–76. Downs also appeared as a panelist on the television game show To Tell the Truth and played himself in an episode of NBC's sitcom Car 54, Where Are You? [15]

Downs earned a postgraduate degree in gerontology from Hunter College while he was hosting Over Easy, a PBS television program about aging that aired from 1977 to 1983. He was probably best known in later years as the Emmy Award-winning co-anchor — again paired with Walters — of the ABC news TV show 20/20 , a primetime news magazine program, from the show's second episode in 1978 until his retirement in 1999. [4]

In 1985, Downs was inducted into the International Air & Space Hall of Fame at the San Diego Air & Space Museum. [16]

In 1985, he was certified by the Guinness Book of World Records as holding the record for the greatest number of hours on network commercial television (15,188 hours), [17] though he lost the record for most hours on all forms of television to Regis Philbin in 2004. [18]

A published composer, Downs hosted the PBS showcase for classical music, Live from Lincoln Center from 1990–96. Downs made a cameo appearance on Family Guy in addition to other TV shows. [19]

Downs has been seen in infomercials for Bottom Line Publications, including their World's Greatest Treasury of Health Secrets, as well as another one for a personal coach. He did an infomercial for Where There's a Will There's an A in 2003. His infomercial work since then has aroused some controversy, with many arguing the products are scams. [20]

Downs has most recently appeared in regional public service announcements in Arizona, where he currently lives, for that state's Motor Vehicles Division; for Hospice of the Valley, a Phoenix-area non-profit organization specializing in hospice care, as well as in many public, short-form programs in which he serves as host of educational interstitials. [21]

On October 13, 2007, Downs was one of the first inductees into the American TV Game Show Hall of Fame in Las Vegas, Nevada. [22]

Downs was inducted as a Laureate of The Lincoln Academy of Illinois and awarded the Order of Lincoln (the State's highest honor) by the Governor of Illinois in 1967 in the area of communications. [23]

Downs was a special consultant to the United Nations for refugee problems from 1961–64 and served as Chairman of the Board of the United States Committee for UNICEF.

Downs wrote a column for Science Digest during the 1960s. He was Science Consultant to Westinghouse Laboratories and the Ford Foundation and an elected member of the National Academy of Science. He served as chair of the Board of Governors of the National Space Society until 2019 and was a longtime president and chairman of the predecessor National Space Institute. [25] The asteroid 71000 Hughdowns is named after him. [26]

The auditorium of Shawnee High School in Lima, Ohio and the Hugh Downs School of Human Communication at Arizona State University in Tempe, Arizona, are named in his honor.

As part of the Centennial of the State of Arizona celebration in February 2012, Downs narrated Aaron Copland's "Lincoln Portrait" on stage with the Phoenix Symphony.

Downs has publicly expressed support for libertarian viewpoints. He opposes the U.S. "war on drugs". He did several pieces about the war on drugs and hemp. [27] On his last 20/20 he was asked if he had any personal opinions he would like to express and responded that marijuana should be legalized. [28] 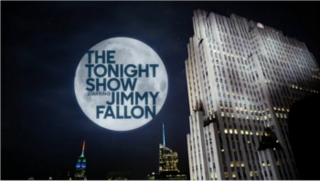 The Tonight Show is an American late-night talk show currently broadcast from the NBC Studios in Rockefeller Center in New York City, the show's original location, and airing on NBC since 1954. The series has been hosted by six comedians: Steve Allen, Jack Paar, Johnny Carson, Jay Leno, on two occasions, Conan O'Brien, and Jimmy Fallon, and the series has had several recurring guest hosts including Ernie Kovacs during the Steve Allen era and Joan Rivers, Garry Shandling, and Jay Leno during Johnny Carson's stewardship, although the practice has been abandoned since Carson's departure, with hosts preferring reruns to showcasing potential rivals. The Tonight Show is the world's longest-running talk show and the longest-running, regularly scheduled entertainment program in the United States. It is the third-longest-running show on NBC, after the news-and-talk shows Today and Meet the Press. 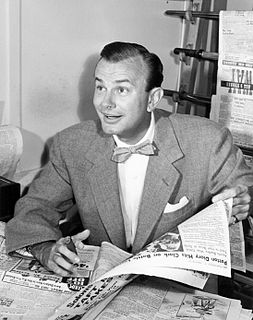 Jack Harold Paar was an American author, movie actor, radio and television comedian, and talk show host. He is best known for his stint as the second host of The Tonight Show from 1957 to 1962. Time magazine's obituary of him notes, "His fans would remember him as the fellow who split talk show history into two eras: Before Paar and Below Paar."

An infomercial is a form of television commercial, which generally includes a toll-free telephone number or website. Most often used as a form of direct response television (DRTV), long-form infomercials are typically 28:30 or 58:30 minutes in length. Infomercials are also known as paid programming. This phenomenon started in the United States, where infomercials were typically shown overnight, outside peak prime time hours for commercial broadcasters. Some television stations chose to air infomercials as an alternative to the former practice of signing off. Some channels air infomercials 24 hours. Some stations also choose to air infomercials during the daytime hours mostly on weekends to fill in for unscheduled network or syndicated programming. By 2009, most infomercial spending in the U.S. occurred during the early morning, daytime and evening hours, or in the afternoon. Stations in most countries around the world have instituted similar media structures. The infomercial industry is worth over $200 billion.

Concentration is an American television game show based on the children's memory game of the same name. Matching cards represented prizes that contestants could win. As matching pairs of cards were gradually removed from the board, it would slowly reveal elements of a rebus puzzle that contestants had to solve to win a match.

John L. Gilbert III is an American show business personality who has worked mainly on television game shows. Originally a nightclub singer and entertainer, he has hosted and announced a number of game shows from various eras, dating as far back as the 1950s. He is known primarily for his work as the announcer and audience host for the syndicated version of the quiz show Jeopardy!.

Fred Silverman was an American television executive and producer. He worked as an executive at all of the Big Three television networks, and was responsible for bringing to television such programs as the series Scooby-Doo (1969–present), All in the Family (1971–1979), The Waltons (1972–1981), and Charlie's Angels (1976–1981), as well as the miniseries Rich Man, Poor Man (1976), Roots (1977) and Shōgun (1980). For his success in programming wildly popular shows, Time magazine declared him "The Man with the Golden Gut" in 1977.

Jim Perry was an American-Canadian television game show host, singer, announcer, and performer in the 1970s and 1980s.

WDIV-TV, virtual channel 4, is an NBC-affiliated television station licensed to Detroit, Michigan, United States. The station serves as the flagship broadcast property of the Graham Media Group subsidiary of Graham Holdings Company. WDIV-TV maintains studio facilities—which also house the headquarters of Graham Media Group—on West Lafayette Boulevard in Detroit. As such, it is the only major television station in the market with offices and studios within the Detroit city limits, while the market's other television stations are based in Southfield. 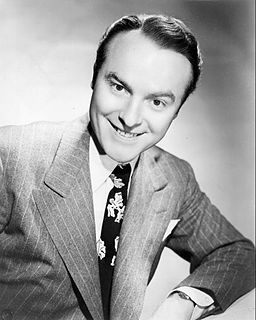 Bob Clayton was an American television game show announcer and host of several shows. He spent his early television career hosting shows in Miami, Florida before moving to New York in the 1960s. 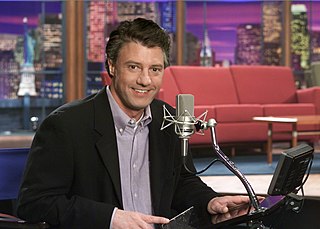 Edd Hall is an American television personality and announcer. He was Jay Leno's announcer on The Tonight Show from 1992 to 2004 and replaced Tonight Show announcer Ed McMahon after Johnny Carson's retirement. Hall introduced himself by saying, "...And me, I'm Edd Hall." He left the show in March 2004. 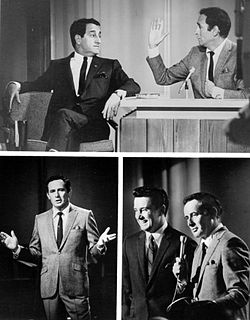 The Joey Bishop Show is an American talk show that had its first broadcast on ABC on April 17, 1967, hosted by Joey Bishop and featuring Regis Philbin in his first ongoing role with national television exposure, as Bishop's sidekick/announcer. Created to challenge The Tonight Show Starring Johnny Carson, the show lasted 33 months, with the last show airing on December 26, 1969. 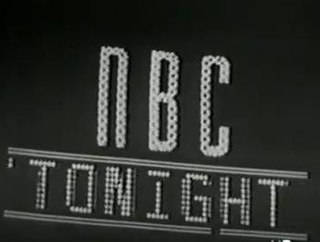 Tonight Starring Steve Allen is an American talk show hosted by Steve Allen. It was the first version of what eventually became known as The Tonight Show. Tonight was the first late-night talk show, as well as the first late night television series of any time to achieve long-term success. Allen's run as host of the show lasted for two and a half seasons, beginning in fall 1954 and ending with Allen's departure in January 1957.

Tonight Starring Jack Paar is an American talk show hosted by Jack Paar under the Tonight Show franchise from 1957 to 1962. It originally aired during late-night.

Bank on the Stars is an American game show that aired on CBS and NBC from 1953 to 1954. The series was hosted by Jack Paar, Bill Cullen, and Jimmy Nelson. Olin Tice and Bill McCord were the announcers.

John Thomas Haskell was an American singer and announcer in the era of old-time radio and later in television.