Montgomerie was styled Lord Montgomerie[ citation needed ] from 1769, and sat as a Member of Parliament for Ayrshire off and on from 1780 to 1796. That year he became Lord Lieutenant of Ayrshire, which post he held until his death. In 1798, having previously succeeded to the earldom through his third cousin, he was elected a representative peer and moved to the House of Lords. On 15 February 1806, he was created Baron Ardrossan in the Peerage of the United Kingdom, enabling him to sit the Lords in his own right. [2] He was made a Knight of the Thistle in 1814.

As large ships were unable to reach Glasgow due to silting of the River Clyde, Montgomerie promoted and partially funded the Glasgow, Paisley and Ardrossan Canal. However funds ran out and the canal was only constructed from Glasgow to Johnstone via Paisley. [2] The Glasgow terminus of the canal was at Port Eglinton. Though the wharf is now filled in, the neighbouring Eglinton Street still bears his name. Preparatory work on the canal from the new harbour created at Ardrossan was used as the basis for Glasgow Street, which is the main thoroughfare of the town.

Montgomerie was an amateur composer and cellist. His best known work is the dance tune "Ayrshire Lasses", and other composers dedicated works to him, including Thomas Arne. [3]

Skelmorlie is a village in North Ayrshire, Scotland. Although it is the northernmost settlement in the council area of North Ayrshire it is contiguous with Wemyss Bay, which is in Inverclyde. The dividing line is the Kelly Burn, which flows into the Firth of Clyde just south of the Rothesay ferry terminal. Despite their proximity, the two villages have historically been divided, Skelmorlie in Ayrshire and Wemyss Bay in Renfrewshire.

Archibald William Montgomerie, 13th Earl of Eglinton, 1st Earl of Winton, KT, PC, styled Lord Montgomerie from 1814 to 1819, was a British Conservative politician. He was Lord Lieutenant of Ireland in 1852 and again from 1858 to 1859.

Alexander Montgomerie, 10th Earl of Eglinton, was a Scottish peer.

This is a list of people who served as Lord Lieutenant of Ayrshire, Scotland.

The Paisley Canal Railway line is a branch line in Scotland running between Glasgow and Paisley. The line currently terminates at Paisley Canal railway station, although it previously continued through Paisley West station, near Ferguslie, to Elderslie junction where it met and crossed under the main Glasgow and South Western Railway line running from Paisley Gilmour Street station to Johnstone, and beyond. After Elderslie, the line terminated at North Johnstone, however another junction allowed services from the Paisley Canal line to continue onto the Bridge of Weir Railway and Greenock and Ayrshire Railway to the latter's terminus at Greenock Princes Pier.

Archibald Montgomerie, 11th Earl of Eglinton was a Scottish General, and Member of Parliament (MP) in the British Parliament. He was also the Clan Chief of the Clan Montgomery. Montgomerie fought in the Seven Years' War, where he served with George Washington. He also was the patron for the poet, Robert Burns. 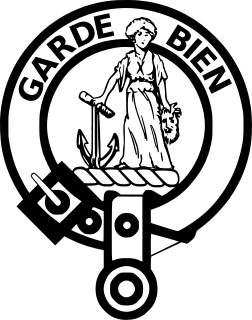 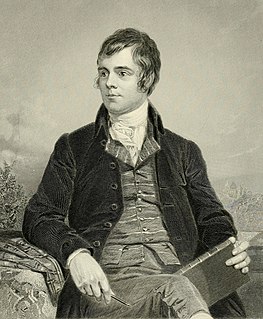 During the years 1781–1782, at the age of 23, Robert Burns (1759–1796) lived in Irvine, North Ayrshire for a period of around 9 months, whilst learning the craft of flax-dressing from Alexander Peacock, who may have been his mother's half-brother, working at the heckling shop in the Glasgow Vennel. Dr John Cumming of Milgarholm, a provost of Irvine, claimed that he had invited Burns to come to Irvine to learn flax dressing. During this time he made a number of acquaintances, befriended several locals and took regular walks into the Eglinton Woods via the old Irvine to Kilwinning toll road and the Drukken or Drucken (Drunken) Steps. Steps over the Red Burn and back via the site of Saint Brides or Bryde's Well at Stanecastle. Burns had several other connections with the Eglinton Estate and other branches of the Montgomerie family. He probably left in March 1782.

Skelmorlie Castle stands on the eastern shore of the Firth of Clyde, Scotland, at the north-western corner of the county of Ayrshire. The structure dates from 1502, and was formerly the seat and stronghold of the Montgomery Clan. The modern village of Skelmorlie lies to the north of the castle.

Polnoon Castle was a 14th-century fortification located on a motte beside the Polnoon Water in Millhall, in the Parish of Eaglesham, East Renfrewshire, Scotland.

Hugh Montgomerie, 1st Earl of Eglinton was a Scottish peer.

The Rt Hon. Alexander Montgomerie, 10th Earl of Eglinton, was a wealthy Scottish peer and landowner. Lord Eglinton was mortally wounded on the beach near his stables at Parkhouse on his own estate of Ardrossan in Ayrshire by an excise officer or Gaudger (Scots) named Mungo Campbell on 24 October 1769, following a dispute about poaching and the latter's right to bear arms on the Earl's grounds.

The Murder of Hugh Montgomerie, 4th Earl of Eglinton at the Annick Ford in Stewarton, East Ayrshire, Scotland, took place in 1586 as a consequence of a long running feud between the Montgomeries, Earls of Eglinton and the Cunninghames, Earls of Glencairn, families who were competing for power and influence locally and nationally. The significant repercussions of this act were felt throughout the county of Ayrshire and beyond. The spelling 'Montgomerie' is used throughout for both the family and Montgomery for the clan and clan and district names 'Cunninghame' in the same fashion.

Hugh Campbell, 3rd Earl of Loudoun was a Scottish landowner, peer, and statesman.