Last updated October 12, 2020
Not to be confused with other Hun Rivers, particularly the nearby tributary of the Yalu.

The Hun River (渾河, "the muddy river") is a river in Liaoning Province, China, and was formerly one of the largest tributaries of the Liao River. It was also formerly known as Shen River (瀋水). Two of Liaoning's most important cities, the provincial capital Shenyang and the seventh largest city Fushun, are located on the Hun River.

Running 415 kilometres (258 mi) and draining a basin of 11,500 square kilometres (4,400 sq mi), the Hun River has numerous tributaries, 31 of which have catchment areas greater than 100 square kilometres (39 sq mi). It flows through the most populous area of Liaoning Province, including the provincial capital and largest city in Northeast China, Shenyang, as well as the 10th largest city, Fushun.

The name Hun River (渾河) means "the muddy river." This name comes from the Hun's fast flow speed and high sediment load, which leads to its muddy appearance.

The Hun River's headwaters arise from the Qian Mountains, a branch of the Changbai Mountains, where the river is also called Nalu River (纳噜水) or Red River (红河), and flows into the 5,437 cubic kilometres (1,304 cu mi) Dahuofang Reservoir (大伙房水库), which supplies drinking water to the surrounding cities of Shenyang, Fushun, Liaoyang, Anshan, Panjin, Yingkou, and Dalian.

Until 1958, the Hun River joined the Wailiao River and then the Taizi River near Haicheng. Together, they formed the Daliao River, which drains into the Liaodong Bay. The confluence of the three rivers was known as "the Trident River."

In 1958, a river engineering project was conducted to address flood control problem in the coastal area near Yingkou. The upper reaches of the Wailiao River at Liujianfang was blocked off, diverting the Liao River towards the Shuangtaizi River. This effectively separated the Hun and Taizi rivers from the main body of Liao River system. Since 1958 the Hun and Taizi rivers are considered an independent river system of their own, and are no longer part of the Liao.

Shenyang, formerly known as Fengtian or by its Manchu name Mukden, is a major sub-provincial city and the provincial capital of Liaoning province, People's Republic of China. Located in central-north Liaoning, it is the province's most populous city as well as the largest city in Northeast China by urban population, with an urban population of 6.3 million, while the total metropolitan population is up to 8.1 million. Shenyang is also the central city of one of the major megalopolises in China, the Greater Shenyang Metropolitan Area, with a total population over 23 million. The city's administrative region includes the ten metropolitan districts of Shenyang proper, the county-level city of Xinmin, and two counties of Kangping and Faku. 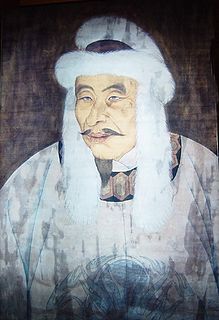 Emperor Taizu of Jin, personal name Aguda, sinicised name Min, was the founder and first emperor of the Jurchen-led Jin dynasty, which ruled northern China between the 12th and 13th centuries. He was initially the chieftain of the Wanyan tribe, the most dominant among the Jurchen tribes which were subjects of the Khitan-led Liao dynasty. Starting in 1114, Aguda united the Jurchen tribes under his rule and rebelled against the Liao dynasty. A year later, he declared himself emperor and established the Jin dynasty. By the time of his death, the Jin dynasty had conquered most of the Liao dynasty's territories and emerged as a major power in northern China. In 1145, he was posthumously honoured with the temple name Taizu by his descendant, Emperor Xizong. 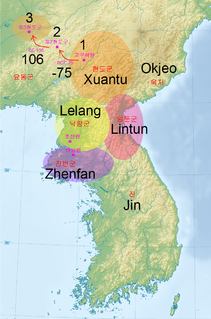 Cungšan was a chieftain of the Jurchen Jianzhou Left Guard. His Temple name is Chun Di. 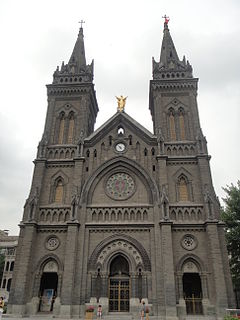 The Roman Catholic Archdiocese of Shenyang is a Latin Metropolitan archdiocese in northeastern PR China. 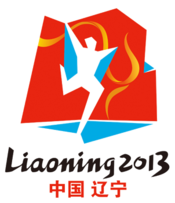 The Liuyang River, also known as Liu River or Liuwei River, is a right-bank tributary of Xiang River, the largest tributary of Xiang River in Changsha, Hunan Province, China. The river has a length of 234.8 kilometres (145.9 mi) with its drainage area of 4,665 square kilometres (1,801 sq mi), accounting for 39.47% of the total area of Changsha, with surface water resources of 4,506 million cubic meters, accounting for 41.08% of that. It flows through Liuyang City, Changsha County, Yuhua, Furong and Kaifu Districts, and merges into Xiang River at Xinhe Delta Mouth of Kaifu District. 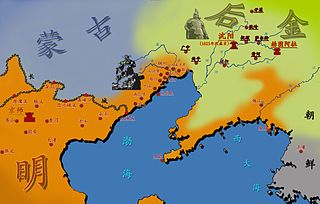 Bukūri Yongšon was a legendary ancestor of the future emperors of the Qing Dynasty.

Nikan Wailan was a Jurchen leader affiliated with the Ming Dynasty and a rival of Nurhaci.