The ancestors of modern Slovenes have lived in the western part of the Carpathian basin since at least the 6th century AD; their presence thus dates back to before the Magyars came into the region. They formed the Slavic Balaton Principality and were later incorporated in Arnulf's Kingdom of Carantania which extended to most of modern south-eastern Austria, southern Hungary and northern Croatia. After the Hungarian invasion in the late 9th century, most of the local Slavs were magyarized. Between the 11th and 12th century, the current linguistic and ethnic border between the Hungarian and Slovene people was established.[ citation needed ]

In the 10th century, the western border of the Kingdom of Hungary was fixed on the river Mura, so the region between the Mura and the Rába rivers, known in Slovene as Slovenska krajina and in Hungarian as Vendvidék, inhabited by Slovenes, remained in Hungary. After World War One, there was a failed attempt by a small group of Hungarian Slovenes to acquire independence (see Slovene March and Mura Republic). In 1919, the majority of the region was annexed to the Kingdom of Serbs, Croats and Slovenes (later renamed to Yugoslavia), and became known under the name of Prekmurje. Only a small portion in the Vas County, in the triangle between the northern border of Slovenia, the Raba river and Austria, remained in Hungary.

In 1920, the number of Slovenes that had remained in Hungary was estimated at around 7,000, but in the next decades many of them emigrated to other Hungarian cities, mostly to Budapest. In 2001, there were around 5,000 Slovenes in Hungary, of whom only around 3,000 remained in their original settlement zone in western Vas county, with others living mostly in larger urban areas.

The Hungarian Slovenes speak a specific dialect of Slovene (the Prekmurje Slovene), which is almost identical with the dialect spoken in the Prekmurje region of Slovenia. The traditional Magyar name for the Slovenes used to be Vendek or Vends; as a result, many Slovenes in Hungary accepted this name as a common denomination, although in their dialect, they always referred to themselves as "Slovenes". In the last decades of the 19th century, and especially during the Horthy regime, the denomination "Wends" was used in order to emphasize the difference between the Hungarian Slovenes and other Slovenes, including attempts in creating a separate identity.

Differently from their counterparts in Prekmurje, where there is a significant Lutheran minority, almost all Rába Slovenes are Roman Catholic, with religion playing an important role in their local traditions and communal life.[ citation needed ]

In the 17th and 18th century numerous Slovene families from Vas County settled down in Somogy County. According to research, there were 16 Slovene settlements in three country districts (Csurgó, Nagyatád, Marcali). The Slovenes came to Somogy County from what is now known as Prekmurje in two waves: the first was caused by Ottoman attacks around 1600 and the second took place in the 18th century, when they escaped persecution of their Protestant faith. In most cases, the Slovenes who immigrated to Somogy gradually became assimilated into the local Hungarian surroundings. Today, only a few indications that evoke the historic presence of Slovenes in Somogy County still exist. Among them, the most evident is the local cuisine.

The other most relevant reminiscence of Slovene presence is the wedding custom in Tarany, where the figure of the guest caller at weddings, still present in the local traditions of the Slovenes from the Rába and those from the Prekmurje region in Slovenia, has been maintained. Both in Tarany and in the Rába Region the guest caller is dressed in a robe decorated with knitting. In addition, he carries a stick with a hedgehog fur wrapped round its bottom. The customs at the deathbed, the vigile and funerals are also similar. Furthermore, the descendants of the Slovenes in Somogy do not observe the typical Hungarian Easter Monday custom, in which men and boys douse women and girls with Eau de Cologne, otherwise typical in the region.

Whereas the Slovenes from the Rába Region still maintain their language and culture, the consciousness of the inhabitants of Tarany about their ancestors is in constant decrease. In the 2001 Hungarian census, just 44 people declared themselves Slovene in the Somogy County. 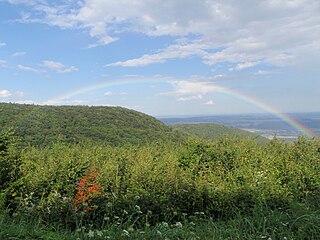 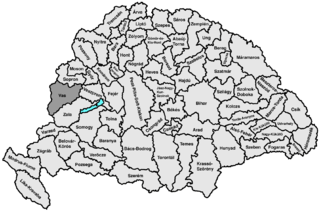 Vas was an administrative county (comitatus) of the Kingdom of Hungary. Its territory is now divided between Hungary, Austria and Slovenia.

Slovenia has been a meeting area of the Slavic, Germanic, Romance, and Uralic linguistic and cultural regions, which makes it the most complex meeting point of languages in Europe. The official and national language of Slovenia is Slovene, which is spoken by a large majority of the population. It is also known, in English, as Slovenian. Two minority languages, namely Hungarian and Italian, are recognised as co-official languages and accordingly protected in their residential municipalities. Other significant languages are Croatian and its variants and Serbian, spoken by most immigrants from other countries of former Yugoslavia and their descendants. Slovenia is ranked among the top European countries regarding the knowledge of foreign languages. The most often taught foreign languages are English and German, followed by Italian, French, and Spanish.

István Küzmics was the most important Lutheran writer of the Slovenes in Hungary.

Ferenc Sbüll was a Hungarian Slovene poet and Catholic priest in Hungary. He was born in Turnišče, a village in the Prekmurje region of Slovenia, then part of the Zala County of the Kingdom of Hungary. He studied in Kőszeg, Szombathely and Vienna. He wrote both secular and religious poetry in his native Prekmurje dialect. He died in Dolenci.

István Zsemlics or Zsemlits was a Slovene author and Catholic priest. 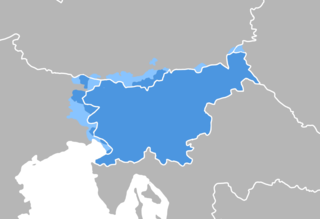 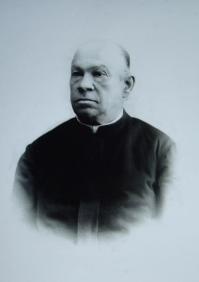 József Borovnyák or Borovnják was a Prekmurje Slovene writer, politician, and Roman Catholic priest in Hungary. 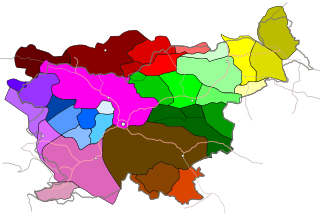 The Wendish question in Hungarian Nationalist and Chauvinist politics concerns the origin and nomenclature of the Hungarian Slovenes. 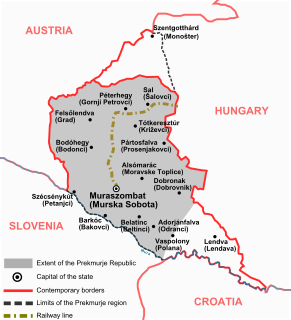 The Republic of Prekmurje was an unrecognized state in Prekmurje, an area traditionally known in Hungarian as Vendvidék . On June 6, 1919, Prekmurje was incorporated into the newly established Kingdom of Serbs, Croats and Slovenes. 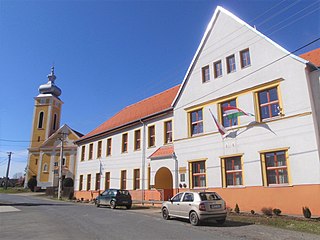 Felsőszölnök is a village in Vas County, Hungary. It is the westernmost point of Hungary, and lies on the borders with Slovenia and Austria.

István Lülik was a Lutheran schoolmaster in the Prekmurje region of the Kingdom of Hungary, today in Slovenia, in the 19th century. He lived and worked in Puconci, near Murska Sobota.

The Slovene March or Slovene krajina was the traditional denomination of the Slovene-speaking areas of the Vas and Zala County in the Kingdom of Hungary from the late 18th century until the Treaty of Trianon in 1919. It comprised approximately two-thirds of modern Prekmurje, Slovenia, and the modern area between the current Slovenian-Hungarian border and the town of Szentgotthárd, where Hungarian Slovenes still live. In Hungarian, the latter area is still known as Vendvidék, which is the Hungarian denomination for the Slovene March, while in Slovene it is referred as Porabje.

Károly Krajczár was a Hungarian Slovene teacher and writer. He was born in Apátistvánfalva. He wrote Slovene textbooks and collected ethnological objects.