According to György Martin, a prominent folklore expert, Hungarian dances can be divided into two categories. The first refers to dances performed in the middle ages while the second relates to the 18th and 19th century. [1] Hungarians have been noted for their "exceptionally well developed sense of rhythm". [2] In the mid-19th century, Musicologist Theodor Billroth performed tests with troops of various nationalities stationed in Vienna and found that the Hungarian troops outperformed others in keeping time with music. [2]

Improvisation and energetic movements are often mentioned as being characteristic of Hungarian dance. [3] [4] Daniel Berzsenyi wrote, "Its secret laws are not ordered by craft. The laws are its own and enthusiasm sets the limit." [3] Elizabeth Charlotte Rearick wrote, "The peasant dance is not one which is set absolutely according to rule; the dancer constructs his steps according to his mood and ingenuity." [5] Collections of the Folk Music Research Group of the Hungarian Academy of Sciences, and the national Ethnographic Museum of the State Folk Ensemble cover almost 10,000 dance variations from 700 Hungarian villages. [6]

The Reformed Church in Hungary was opposed to dancing, but the Catholic Church was less restrictive. Some Catholic authors wrote of their approval of dancing, particularly in heaven. One early 16th-century nun who described that "dancing will be essential there for the strong, well-built bodies of the saints," while in the 18th century, Catholic priest Zsigmond Csuzy wrote "There would have to be dancing (in heaven) for the itching soles of the Hungarian whose whole life on earth is a dancing school." [7]

The Csárdás is regarded as the most important Hungarian folk dance. [8] It is a newer style of dance developed in the 18th and 19th centuries, and features Hungarian embroidered costumes and energetic music. From the men's intricate bootslapping dances to the ancient women's circle dances, Csárdás demonstrates the infectious exuberance of the Hungarian folk dancing still celebrated in the villages.

In the 1869 book The Magyars: Their Country and Institutions, Arthur Patterson described the dance: "they whirl swiftly round, two or three times, and then, breaking away, recommence the pantomime as before... One seldom sees two couples performing exactly the same figure at the same time. While two separated partners are doing their step with their backs turned on one another, another couple between them are spinning round in the ecstasies of reunion." [8]

Martin describes a number of variations of the Csárdás in his 1974 book Hungarian Folk Dances. Figures danced during the Swift Csárdás include the lippentos-martogatos (crouching-dunking), turning in pairs, and playful alluring and releasing of the partner. [9] The Csárdás as danced by older people in the 1970s included half crouching, half turning figures. [10] In the village of Jaszszentandras, Martin recorded a rare form of the Broom Dance in which "the broom is put through a crouching, tripping movement." [10]

Hungary is a country in Central Europe. It is bordered by Slovakia to the north, Ukraine to the northeast, Romania to the east and southeast, Serbia to the south, Croatia and Slovenia to the southwest, and Austria to the west. Hungary covers an area of 93,030 square kilometres (35,920 sq mi) in the Carpathian Basin, with a population of 10 million. Hungarian, the official language, is the world's most widely spoken Uralic language, and among the few non-Indo-European languages widely spoken in Europe. Budapest is the country's capital and largest city; other major urban areas include Debrecen, Szeged, Miskolc, Pécs, and Győr.

Csárdás, often seen as Czárdás, is a traditional Hungarian folk dance, the name derived from csárda. It originated in Hungary and was popularized by bands in Hungary and neighboring lands of Slovenia, Burgenland, Croatia, Transylvania, Slovakia and Moravia, as well as among the Banat Bulgarians, including those in Bulgaria.

Circle dance, or chain dance, is a style of dance done in a circle or semicircle to musical accompaniment, such as rhythm instruments and singing. Circle dancing is probably the oldest known dance formation and was part of community life from when people first started to dance. Unlike line dancing, circle dancers are in physical contact with each other; the connection is made by hand-to-hand, finger-to-finger or hands-on-shoulders. It is a type of dance where anyone can join in without the need of partners. Generally, the participants follow a leader around the dance floor while holding the hand of the dancers beside them. The dance can be gentle or energetic. 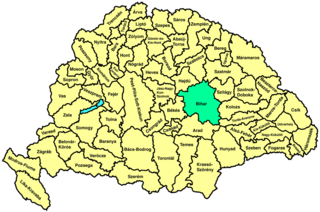 Bihar was an administrative county (comitatus) of the Kingdom of Hungary and a county of the Eastern Hungarian Kingdom and Principality of Transylvania. Most of its territory is now part of Romania, while a smaller western part belongs to Hungary. The capital of the county was Nagyvárad. 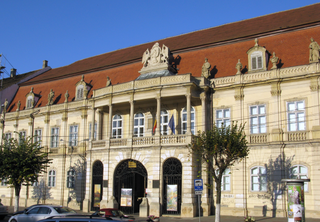 The Rákóczi were a Hungarian noble family in the Kingdom of Hungary between the 13th century and 18th century. Their name is also spelled Rákoci, Rakoczi and Rakoczy in some foreign (English) sources. The family was named after Rákóc. 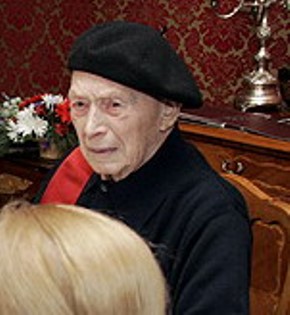 Character dance is a specific subdivision of classical dance. It is the stylized representation of a traditional folk or national dance, mostly from European countries, and uses movements and music which have been adapted for the theater.

The three csárdás that Franz Liszt wrote in 1881–82 and 1884 are solo piano pieces based on the Hungarian dance form of the same name. Liszt treats the dance form itself much less freely than he did much earlier with the verbunkos in the Hungarian Rhapsodies, and the material itself remains more specifically Hungarian than gypsy in thematic material. Their spare lines, angular rhythms and advanced harmonies show these pieces to be direct ancestors of the compositions of Béla Bartók. Because of these attributes, the csárdás are considered by Liszt scholars among the more interesting of the composer's late output.

Croatian dance traditionally refers to a series of folk-dances, the most common being the kolo.

The Bocskai uprising, known in Hungary as Bocskai's War of Independence was a revolt which took place in Hungary, Transylvania and modern Slovakia during the Long Turkish War against Emperor Rudolf II. The rebel leader was Stephen Bocskai, a Protestant Hungarian nobleman. The Ottoman wars had burdened the Kingdom of Hungary for years, causing famine and disease, and the armies of the Christian states had been weakened by losses to Ottoman and Tatar forces.