The Huntington Center is a skyscraper on Capitol Square in downtown Columbus, Ohio. The building is 512 feet (156 m) tall and has 37 floors. It is the fourth tallest building in Columbus, and the tallest constructed in the 1980s. It was largely completed in 1984, though finishing touches were still being added into 1985. [2] The building opened on May 16, 1985. [3]

The building is part of a complex by the same name, which also contains Huntington Plaza, DoubleTree Hotel Guest Suites Columbus, and the Huntington National Bank Building. 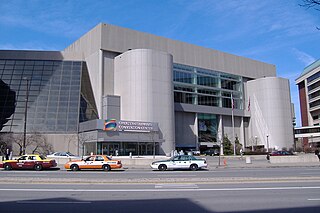 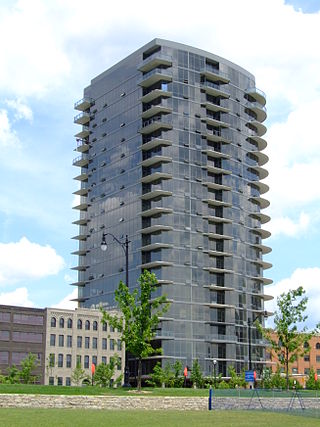 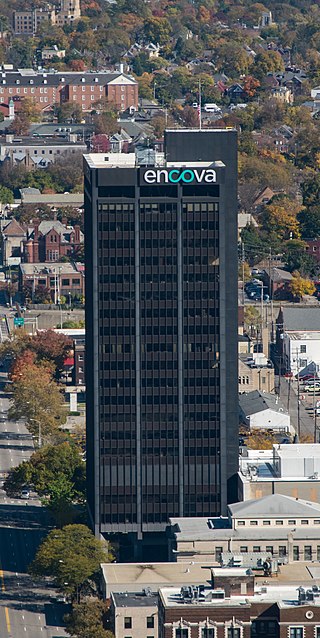 The Encova Building is a 286 ft (87m) tall skyscraper located at 471 East Broad Street Columbus, Ohio. It was completed in 1973 and was designed by Brubaker/Brandt and Maddox NBD. It is the 18th tallest building in Columbus, has 21 floors, and 6 elevators. The building initially served as the headquarters for the Motorists Mutual Insurance Group, a subsidiary of the larger insurance group BrickStreet; in 2019, BrickStreet changed its name to Encova, and as "an effort to integrate all of the company’s operations and names under one brand," the Motorists Mutual Building was renamed to the Encova Building, and its exterior signage changed to match. 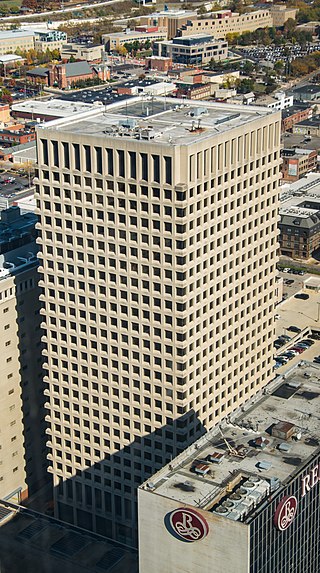 Continental Center is a 26-story, 348 ft (106 m) skyscraper in Downtown Columbus, Ohio. It is the 14th tallest building in Columbus. It was completed in 1973 and designed by architectural firm Brubaker/Brandt. The building follows a modernist architectural style and has been known as the Ohio Bell Building and the Ameritech Building. The building was added to the National Register of Historic Places in 2021. 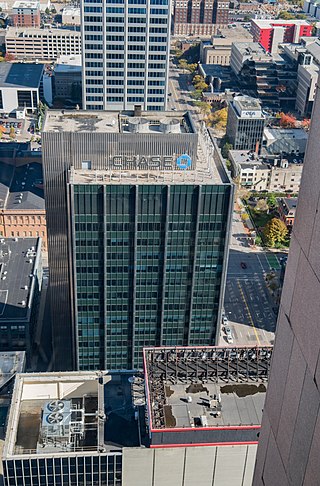 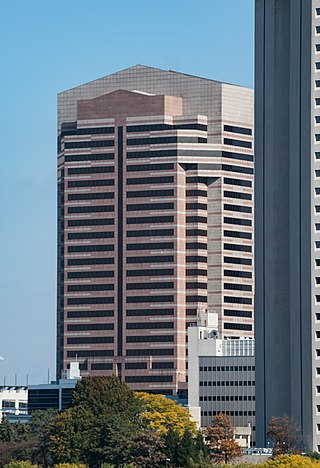 Downtown Toledo is the central business district of Toledo, Ohio. Both the Warehouse District and the area surrounding the Huntington Center have been areas of recent growth. 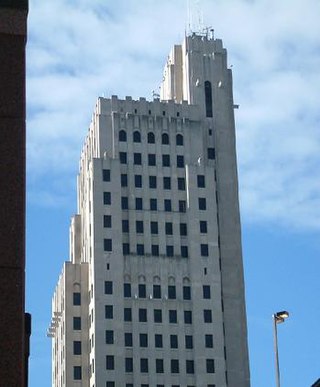 The PNC Bank Building is a 368 ft (112 m) tall skyscraper located at 405 Madison Avenue in Downtown Toledo, Ohio. The limestone-faced steel-frame building was constructed in 1930 and is an example of the Art Deco style of architecture. It stood as Toledo's tallest building for 39 years, from its completion in 1930 until the completion of the Tower on the Maumee in 1969. The PNC Bank Building is currently the third-tallest building in Toledo.

Matsuricon is a three-day anime convention held during August in Columbus, Ohio, at the Hyatt Regency Columbus and Greater Columbus Convention Center. The convention is family friendly. 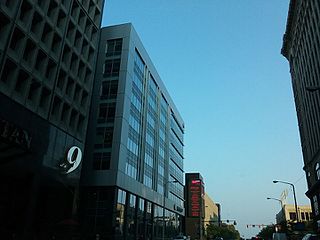 The Nine-Twelve District is a major area of downtown Cleveland, in the U.S. state of Ohio, that is the re-branding of the former Financial District of Cleveland. This re-branding has largely been championed by the Downtown Cleveland Alliance. The name refers to the two major commercial avenues between which the district lies, East 9th Street and East 12th Street, with Lakeside Avenue and Euclid Avenue serving as the northern and southern boundaries, respectively. This revamping and reboot of the Cleveland Central Business District has occurred because property and business owners demanded more investment in the central area. The district is home to the newly expanded Cuyahoga County Headquarters. 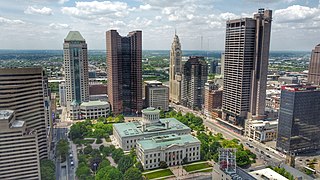 The architecture of Columbus, Ohio is represented by numerous notable architects' works, individually notable buildings, and a wide range of styles. Yost & Packard, the most prolific architects for much of the city's history, gave the city much of its eclectic and playful designs at a time when architecture tended to be busy and vibrant. 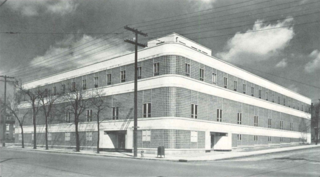