Last updated May 19, 2020
This article is about the Mayan god. For the automobile, see Lamborghini Huracan. For other uses, see Huracan (disambiguation).

Huracan [1] ( /ˈhʊrəkən,ˈhʊrəˌkɑːn/ ; Spanish : Huracán; Mayan languages : Hunraqan, "one legged"), often referred to as U Kʼux Kaj, the "Heart of Sky", [2] is a Kʼicheʼ Maya god of wind, storm, fire and one of the creator deities who participated in all three attempts at creating humanity. [3] He also caused the Great Flood after the second generation of humans angered the gods. He supposedly lived in the windy mists above the floodwaters and repeatedly invoked "earth" until land came up from the seas.

His name, understood as 'One-Leg', suggests god K of Postclassic and Classic Maya iconography, a deity of lightning with one human leg, [4] and one leg shaped like a serpent. God K is commonly referred to as Bolon Tzacab and Kʼawiil or Kauil. The name may ultimately derive from huracan, a Carib word, [5] and the source of the words hurricane and orcan (European windstorm). 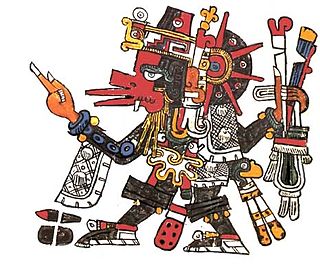 Ehecatl is a pre-Columbian deity associated with the wind, who features in Aztec mythology and the mythologies of other cultures from the central Mexico region of Mesoamerica. He is most usually interpreted as the aspect of the Feathered Serpent deity as a god of wind, and is therefore also known as Ehecatl-Quetzalcoatl. Ehecatl also figures prominently as one of the creator gods and culture heroes in the mythical creation accounts documented for pre-Columbian central Mexican cultures.

Qʼuqʼumatz was a deity of the Postclassic Kʼicheʼ Maya. Qʼuqʼumatz was the Feathered Serpent divinity of the Popol Vuh who created humanity together with the god Tepeu. Qʼuqʼumatz is considered to be the rough equivalent of the Aztec god Quetzalcoatl, and also of Kukulkan of the Yucatec Maya tradition. It is likely that the feathered serpent deity was borrowed from one of these two peoples and blended with other deities to provide the god Qʼuqʼumatz that the Kʼicheʼ worshipped. Qʼuqʼumatz may have had his origin in the Valley of Mexico; some scholars have equated the deity with the Aztec deity Ehecatl-Quetzalcoatl, who was also a creator god. Qʼuqʼumatz may originally have been the same god as Tohil, the Kʼicheʼ sun god who also had attributes of the feathered serpent, but they later diverged and each deity came to have a separate priesthood.

Chalchiuhtlicue[t͡ʃaːɬt͡ʃiwˈt͡ɬikʷeː] is an Aztec deity of water, rivers, seas, streams, storms, and baptism. Chalchiuhtlicue is associated with fertility and she is the patroness of childbirth. Chalchiuhtlicue was highly revered in Aztec culture at the time of the Spanish conquest and she was an important deity figure in the Postclassic Aztec realm of central Mexico. Chalchiuhtlicue belongs to a larger group of Aztec rain gods and she is closely related to another Aztec water god, Chalchiuhtlatonal.

In Aztec mythology, Cihuacōātl[siwaˈkoːaːt͡ɬ] was one of a number of motherhood and fertility goddesses. Cihuacōātl was sometimes known as Quilaztli. 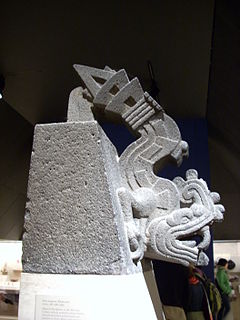 In Aztec religion, Xiuhcoatl[ʃiʍˈkoːaːt͡ɬ] was a mythological serpent, regarded as the spirit form of Xiuhtecuhtli, the Aztec fire deity sometimes represented as an atlatl or a weapon wielded by Huitzilopochtli. Xiuhcoatl is a Classical Nahuatl word that translates literally as, "turquoise serpent". The name also carries the symbolic and descriptive meaning, "fire serpent".

Kʼawiil, in the Post-Classic codices corresponding to God K, is a Maya deity identified with lightning, serpents, fertility and maize. He is characterized by a zoomorphic head, with large eyes, long, upturned snout and attenuated serpent tooth. A torch, stone celt, or cigar, normally emitting smoke, comes out of his forehead, while a serpent leg represents a lightning bolt. In this way, Kʼawiil personifies the lightning axe both of the rain deity and of the king as depicted on his stelae.

In Maya mythology, Camazotz was a bat god. Camazotz means "death bat" in the Kʼicheʼ language. In Mesoamerica the bat was associated with night, death, and sacrifice.

Tohil was a deity of the Kʼicheʼ Maya in the Late Postclassic period of Mesoamerica. 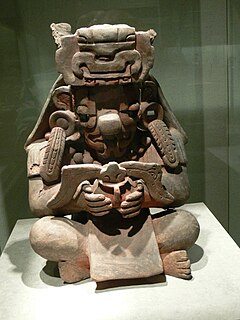 Cocijo is a lightning deity of the pre-Columbian Zapotec civilization of southern Mexico. He has attributes characteristic of similar Mesoamerican deities associated with rain, thunder and lightning, such as Tlaloc of central Mexico, and Chaac of the Maya civilization. In the Zapotec language, the word cocijo means "lightning", as well as referring to the deity. 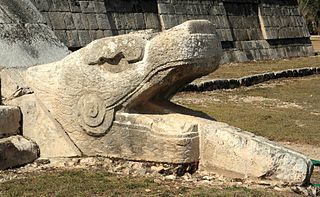 Kukulkan is the name of a Mesoamerican serpent deity. Prior to the Spanish Conquest of the Yucatán, Kukulkan was worshipped by the Yucatec Maya people of the Yucatán Peninsula, in what is now Mexico. The depiction of the Feathered Serpent is present in other cultures of Mesoamerica. Kukulkan is closely related to the deity Qʼuqʼumatz of the Kʼicheʼ people and to Quetzalcoatl of Aztec mythology. Little is known of the mythology of this Pre-Columbian era deity.

Macuiltochtli is one of the five deities from Aztec and other central Mexican pre-Columbian mythological traditions who, known collectively as the Ahuiateteo, symbolized excess, over-indulgence and the attendant punishments and consequences thereof.

World trees are a prevalent motif occurring in the mythical cosmologies, creation accounts, and iconographies of the pre-Columbian cultures of Mesoamerica. In the Mesoamerican context, world trees embodied the four cardinal directions, which also serve to represent the fourfold nature of a central world tree, a symbolic axis mundi which connects the planes of the Underworld and the sky with that of the terrestrial realm.

The term uniped refers to a person or creature with only one foot and one leg, as contrasted with a biped and a quadruped. Moving using only one leg is known as unipedal movement. Many bivalvia and nearly all gastropoda molluscs have evolved only one foot. Through accidents or birth abnormalities it is also possible for an animal or a human being to end up with only a single leg. 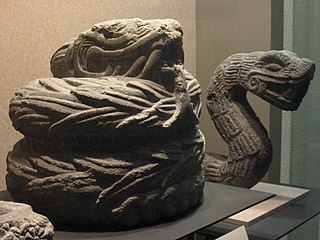 The Feathered Serpent was a prominent supernatural entity or deity, found in many Mesoamerican religions. It is still called Quetzalcoatl among the Aztecs, Kukulkan among the Yucatec Maya, and Q'uq'umatz and Tohil among the K'iche' Maya. The real translation is "Precious Holy Snake" or "Precious Holy Twin" with no evidence of this character having a beard or being European as new age people misinterpreted as the "Jesus of the Americas".

God L of the Schellhas-Zimmermann-Taube classification of codical gods is one of the major pre-Spanish Maya deities, specifically associated with trade. Characterized by high age, he is one of the Mam ('Grandfather') deities. More specifically, he evinces jaguar traits, a broad feathery hat topped by an owl, and a jaguar mantle or a cape with a pattern somewhat resembling that of an armadillo shell. The best-known monumental representation is on a doorjamb of the inner sanctuary of Palenque's Temple of the Cross.

Jacawitz was a mountain god of the Postclassic Kʼicheʼ Maya of highland Guatemala. He was the patron of the Ajaw Kʼicheʼ lineage and was a companion of the sun god Tohil. It is likely that he received human sacrifice. The word jacawitz means "mountain" in the lowland Maya language, and the word qʼaqʼawitz of the highland Maya means "fire mountain", which suggests that Jacawitz was mainly a fire deity, much like Tohil. In the Mam language, the similar word xqʼaqwitz means "yellow wasp" and the wasp was an important symbol of the deity and its associated lineage. In the Cholan languages, jacawitz means "first mountain", linking the god with the first mountain of creation.

An eccentric flint is an elite chipped artifact of an often irregular ('eccentric') shape produced by the Classic Maya civilization of ancient Mesoamerica. Although generally referred to as "flints", they were typically fashioned from chert, chalcedony and obsidian. 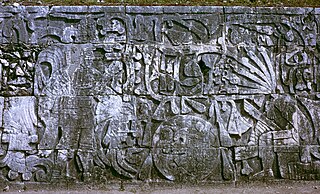 During the pre-Columbian era, human sacrifice in Maya culture was the ritual offering of nourishment to the gods. Blood was viewed as a potent source of nourishment for the Maya deities, and the sacrifice of a living creature was a powerful blood offering. By extension, the sacrifice of a human life was the ultimate offering of blood to the gods, and the most important Maya rituals culminated in human sacrifice. Generally only high status prisoners of war were sacrificed, with lower status captives being used for labour.