The II Corps of the Grande Armée was a French military unit that existed during the Napoleonic Wars.

At its formation in 1805, General Auguste de Marmont was appointed commander of the II Corps.

War of the Third Coalition

The corps participated in the Ulm campaign before advancing southeast to serve as a flank guard. Still under Marmont, the troops then served as the garrison of the Illyrian Provinces until 1809 when they became the Army of Dalmatia and later XI Corps.

A new II Corps was created in 1808 in northern Spain from troops under Marshal Jean-Baptiste Bessières. Soon after, Marshal Jean-de-Dieu Soult took command of the formation. In 1810, General Jean Reynier assumed command of the II Corps in Spain until 1811 when the unit was suppressed.

War of the Fifth Coalition

Meanwhile, a parallel II Corps was created in 1809 to fight against Austria. The formation was led first by Marshal Nicolas Oudinot, then by Marshal Jean Lannes who was fatally wounded at Aspern-Essling. Oudinot then took over II Corps again and won his marshal's baton at Wagram in July 1809.

Still commanded by Oudinot, the corps took part in the invasion of Russia in 1812, at which point its size was roughly 40,000 men.

War of the Sixth Coalition

The II Corps was reorganized in Germany in 1813, with Marshal Claude Victor-Perrin appointed to lead it.

War of The Seventh Coalition

The corps was headed by General Honoré Charles Reille in 1815 and took part in the Battle of Waterloo.

This is the complete order of battle of the French and Third Coalition armies during the Battle of Austerlitz.

The V Corps of the Grande Armée was a French military unit that existed during the Napoleonic Wars. The corps was originally formed in 1805 and was reorganized several times until it was dissolved in 1815.

In the Battle of Fleurus Jean-Baptiste Jourdan's French army repulsed an attack by the combined Austro-Dutch army led by Prince Josias of Saxe-Coburg-Saalfeld. Tactically the battle was a draw but strategically it was a decisive French victory. The battle led to the collapse of the Coalition position in the Austrian Netherlands.

On 25 March 1799, French and Habsburg armies fought for control of the geographically strategic Hegau in present-day Baden-Württemberg. The battle has been called by various names: First Battle of Stockach, the Battle by Stockach, and, in French chronicles, the Battle of Liptingen. 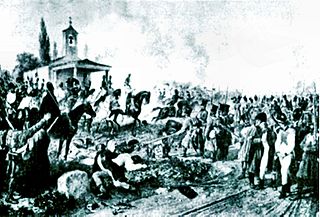 The Hanau order of battle shows the forces engaged at the 1813 battle of Hanau, during the War of the Sixth Coalition, when a French force under Emperor of the French Napoleon I defeated a vastly superior Austro-Bavarian force commanded by General Karl Philipp von Wrede. 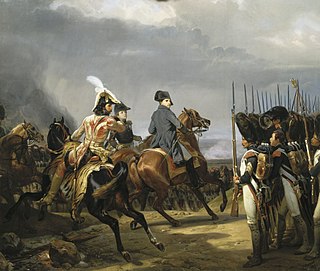 The Army de Châlons was a French military formation that fought during the Franco-Prussian War of 1870. Formed in the camp of Châlons on August 17, 1870 from elements of the Army of the Rhin (1870) which the formation was issued from, the Army of Châlons was engaged in combats of Beaumont and Sedan while disappearing during the capitulation of September 2, 1870.

The Dalmatian Campaign saw several battles fought between 30 April and 21 May 1809 by Auguste Marmont's First French Empire soldiers and Andreas von Stoichevich's Austrian Empire troops. The Austrians drove the French from their positions on the Zrmanja River at the end of April. But in mid-May, the French counterattack forced back the Austrians. The defenders offered stout resistance, but ultimately Marmont broke out of Dalmatia and joined Emperor Napoleon's army near Vienna with over 10,000 men. The campaign was fought during the War of the Fifth Coalition, part of the Napoleonic Wars. Dalmatia is part of the modern-day nation of Croatia.

The XI Corps of the Grande Armée was a French military unit that existed during the Napoleonic Wars. In 1809, during the War of the Fifth Coalition, General Auguste de Marmont's Army of Dalmatia was renamed the XI Corps. Emperor Napoleon I held it in reserve at the Battle of Wagram. In 1812, the unit was reconstituted during the invasion of Russia and placed under Marshal Pierre Augereau. It did not fight in any battles and instead served a collection point for reserves. In spring 1813, it was reorganized and placed under the command of Marshal Jacques MacDonald. The corps fought at Lützen, Bautzen, the Katzbach, Leipzig, and Hanau in 1813. Still under MacDonald, the unit fought at Bar-sur-Aube and several minor actions in 1814.

The VI Corps of the Grande Armée was a French military unit that existed during the Napoleonic Wars. It was formed at the Camp de Boulogne and assigned to Marshal Michel Ney. From 1805 to 1811, the VI Corps fought under Ney's command in the War of the Third Coalition, the War of the Fourth Coalition, and the Peninsular War. General Jean Gabriel Marchand was in charge of the corps for a period when Ney went on leave. In early 1811, Ney was dismissed by Marshal André Masséna for disobedience and the corps was briefly led by General Louis Henri Loison until the corps was dissolved in May 1811. The VI Corps was revived in 1812 for the French invasion of Russia and placed under Marshal Laurent Gouvion Saint-Cyr. It consisted entirely of Bavarian soldiers at that time. During the disastrous retreat from Moscow, the corps was virtually destroyed. In 1813, during the War of the Sixth Coalition, it was rebuilt and reorganized with French troops. Marshal Auguste de Marmont took command of the corps and managed it until Napoleon's abdication in 1814. It took part in many battles including Dresden and Leipzig in 1813. During the War of the Seventh Coalition, General Georges Mouton commanded the VI Corps at the Battle of Waterloo.

The VII Corps of the Grande Armée was a French military unit that existed during the Napoleonic Wars. It was formed in 1805 and assigned to Marshal Pierre Augereau. From 1805 to 1807, Augereau led the VII Corps in the War of the Third Coalition and the War of the Fourth Coalition. It was disbanded after being nearly wiped out at the Battle of Eylau in February 1807 and its surviving troops were distributed to other corps. At the end of 1808, the VII Corps was reconstituted in Catalonia during the Peninsular War and General Laurent Gouvion Saint-Cyr was given command of it. The corps fought in Spain until 1811, when it was renamed the Army of Catalonia. At that time it was again led by Augereau.

The VIII Corps of the Grande Armée was a French military unit that existed during the Napoleonic Wars. Emperor Napoleon I formed it in 1805 by borrowing divisions from other corps and assigned it to Marshal Édouard Mortier. Marshal André Masséna's Army of Italy was also reorganized as the VIII Corps at the end of the 1805 campaign. The corps was reformed for the 1806 campaign under Mortier and spent the rest of the year mopping up Prussian garrisons in western Germany.

The III Cavalry Corps was a French military formation that fought during the Napoleonic Wars. The corps was created in 1812 and reconstituted in 1813 and 1815. Emperor Napoleon first mobilized the corps for the French invasion of Russia. Commanded by General of Division Emmanuel Grouchy, two divisions of the corps fought at Borodino, Tarutino, and Vyazma. A third division fought at First and Second Polotsk and the Berezina. During the War of the Sixth Coalition in 1813, General of Division Jean-Toussaint Arrighi de Casanova led the corps at Grossbeeren, Dennewitz, Leipzig, and Hanau. During the Hundred Days in 1815, Napoleon reorganized the corps and appointed General of Division François Étienne de Kellermann to lead it. One brigade of the corps was engaged at Quatre Bras and both divisions fought at Waterloo.

The Reserve Cavalry Corps or Cavalry Reserve of the Grande Armée was a French military unit that existed during the Napoleonic Wars. In 1805, Emperor Napoleon I appointed Marshal Joachim Murat to command all the cavalry divisions that were not directly attached to the army corps. During the Ulm campaign, Murat led his horsemen in successfully hunting down many Austrian units that escaped the capitulation of Ulm, before fighting at Austerlitz in December 1805. Under Murat, the Cavalry Reserve played a prominent role in the destruction of the Prussian armies after the Battle of Jena-Auerstedt in 1806. Five dragoon divisions of the corps were employed in the Peninsular War starting in 1808 and placed under the overall command of Marshal Jean-Baptiste Bessières. The Cavalry Reserve was reassembled in 1809 to fight Austria with Bessières still in command. In 1812, the Reserve Cavalry Corps was split up into the I, II, III, and IV Cavalry Corps for the French invasion of Russia. 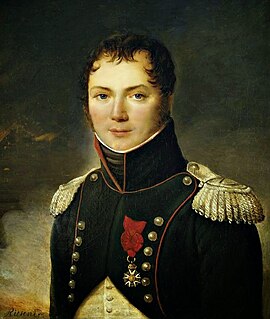 Charles Claude Jacquinot commanded a French cavalry division at the Battle of Waterloo in 1815. He joined a volunteer battalion in 1791 and transferred to a light cavalry regiment as a junior officer in 1793. He earned promotion to squadron commander and was acting commander of his regiment at Hohenlinden in 1800. After serving in a staff position at Austerlitz in 1805, he led a light cavalry regiment at Jena in 1806. Promoted to general of brigade he led his horsemen at Abensberg, Raab and Wagram in 1809. During the French invasion of Russia he fought at Ostrovno, Smolensk and Borodino in 1812. During the 1813 German Campaign he led a cavalry brigade at Dennewitz and Leipzig. After being appointed general of division he fought at Second Bar-sur-Aube and Saint-Dizier in 1814. During the Hundred Days he rallied to Napoleon and led a light cavalry division in the Waterloo campaign. After 15 years of inactivity, he was restored to favor in the 1830s. Thereafter he held a number of commands and was appointed to the Chamber of Peers. His surname is one of the names inscribed under the Arc de Triomphe, on Column 20. 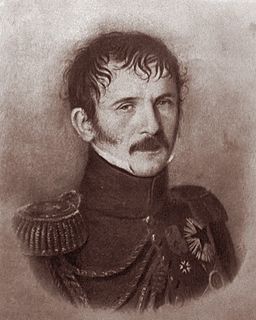 Christophe Antoine Merlin became a French division commander during the Napoleonic Wars. He joined a volunteer regiment in 1791 and fought against the Kingdom of Spain in the War of the Pyrenees. After becoming an officer in the 4th Hussar Regiment, he participated in the Rhine and Italian campaigns. In 1805 he was promoted general of brigade and fought in Italy and in the 1806 Invasion of Naples. Later he became an equerry to Joseph Bonaparte when that individual headed the Kingdom of Naples. 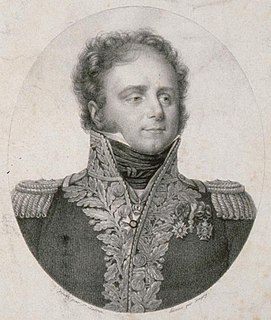 Sigismond Frédéric de Berckheim became a French division commander during the last years of the Napoleonic Wars. Born into an old Alsatian family, he joined an infantry regiment at the age of 14. In 1807 he became the commanding officer of the 1st Cuirassier Regiment. In 1809 he led his cavalrymen at Eckmühl, Ratisbon, Aspern-Essling and Wagram. Promoted to general of brigade, he fought at First and Second Polotsk and the Berezina in 1812. He led a cavalry brigade at Lützen and Bautzen in 1813. Promoted to general of division, he led a cavalry division at Dresden, Leipzig and Hanau. He commanded a cavalry division at Arcis-sur-Aube in 1814. He became an inspector general and a member of the Chamber of Deputies in 1815 and 1816. His surname is one of the names inscribed under the Arc de Triomphe, on Column 12.