The INSEE code is a numerical indexing code used by the French National Institute for Statistics and Economic Studies (INSEE) to identify various entities, including communes and départements . They are also used as national identification numbers given to people.

Although today this national identification number is used by social security in France and is present on each person's social security card ( carte Vitale ), it was originally created under Vichy France under the guise of the Registration Number to the National Directory of Identification of Physical People (Numéro d'inscription au répertoire des personnes physiques, NIRPP or simply NIR). The latter was originally to be used as a clandestine military recruitment tool, but at the end served to identify Jews, gypsies, and other "undesirable" populations under Vichy's conceptions. The first digit of the NIR was 1 for a male European, 2 for a female European, 3 for a male Muslim, 4 for a female Muslim, 5 for a male Jew, 6 for a female Jew, 7 for a male foreigner, 8 for a female foreigner, while 9 and 0 were reserved for persons of undetermined racial status.

The Demographic Service was created in 1940 in order to replace the military recruitment office prohibited by the June 1940 Armistice with Nazi Germany. On October 11, 1941, the Demographic Service absorbed the former General Statistics of France (SGF, created in 1833). The new organization was called the National Statistical Service (Service national des statistiques, SNS).

Each French person receives at birth a national identification number, the "numéro d'inscription au répertoire" (NIR or National Repertory registration), also called a "numéro de sécurité sociale" (or Social Security number). This INSEE number is composed of 13 digits + a two-digit key. Although the total number is of 15 digits, its composition makes it easy for individuals to remember at least the first seven digits (they just have to know their sex, year and month of birth, and department of birth). Since this number is used in many administrative procedures (whether by the state or by private enterprises), most people know by memory part of this identification number.

Their format is as follows: syymmlloookkk cc, [1] where

The "sex" codes (s: 1 for male, 2 for female) can be given in special occasions for temporary registrations, such as for someone who a person who works as a wage-earner but is not registered for miscellaneous reasons. The sex code can be changed if someone underwent gender reassignment. [2] Under Vichy France, but only in Algeria (not in metropolitan France) this s code was also used to register Jews, Algerian Muslims, foreigners, or ill-defined people. Thus, 8 or 9 was given to Muslim people of Algeria and of all colonies; 1 or 2 for indigenous Jews; 7 or 8 for foreigners; 1 or 0 for miscellaneous and ill-defined status (people in none of these classes).[ citation needed ]

The part llooo is used together, referred to as the COG, which identifies the person's location of birth. [1]

If in a specified month the total number of births exceeds 999, an extension common code is created.

The last code is obtained by a mathematical method (dividing by 97 the number formed by the first 13 digits, taking the remainder from this division, and then the "complement to 97", that is the difference between 97 and this remainder): this gives the control key code.

The NIR (National Identification Repertory) was created by René Carmille, who died at the Dachau concentration camp in 1944) who conducted, between April and August 1941, under the Vichy regime, the first general survey to prepare the secret mobilisation of a French army. The codification was then done by General Marie in Algeria, to obtain a census of Jews, Muslims and other categories. The aim was to create a file of the whole of the French population and to discriminate according to ethnic or statutory criteria, following the racial policies of Vichy. Thus, the first digit that is now used to distinguish males and females then had other purposes: 3 or 4 for Algerian non-Jewish indigenous people, 5 or 6 for indigenous Jews, 7 or 8 for foreigners, and 9 or 0 for miscellaneous and ill-defined statutes.

This discriminatory categorization used in Algeria was abolished in 1944 and has never been used in Metropolitan France where, throughout the war, only "1" and "2" (for male and female) was used. The administration of the NIR was assigned in 1946 to the new Statistical Institute, the INSEE. This institution is also in charge of the RNIPP (répertoire national d'identification des personnes physiques, National Repertory of Identification of Physical Persons), which contains for each individual: the NIR, last name, first name, sex, date and place of birth, and a reference of the Birth Registration (Acte de naissance).

SIREN codes are given to businesses and nonprofit associations, SIRET codes to their establishments and facilities (SIRENE database).

The commune codes were assigned initially by numbering the alphabetically ordered list of commune names within each department or overseas division. Exceptions have occurred over time because some communes were renamed, some communes were split and new communes have been added to the end of the list.

The departmental codes are also best known as part of the French postal codes; but the postal codes do not include the INSEE commune numbers but were designed by geographical series starting by the main city of the department and then split geographically around them, with additional series given for special distribution. Some areas of the largest and most populated communes can also be assigned distinct series. The postal codes do not indicate precisely the communes but the location of the post office in charge for the distribution, and many rural communes share the same postal code number as the commune where the post office is located.

There are also 5-digit INSEE codes for foreign countries and territories, beginning with 99. [3] 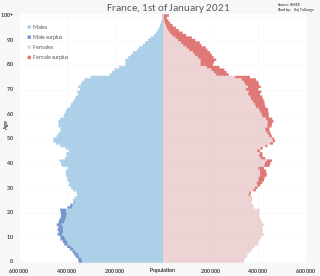 The demography of France is monitored by the Institut national d'études démographiques (INED) and the Institut national de la statistique et des études économiques (INSEE). As of 1 January 2021, 65,250,000 people lived in Metropolitan France, while 2,785,000 lived in overseas France, for a total of 68,035,000 inhabitants in the French Republic.

The National Institute of Statistics and Economic Studies, abbreviated INSEE, is the national statistics bureau of France. It collects and publishes information about the French economy and people and carries out the periodic national census. Headquartered in Montrouge, a commune in the southern Parisian suburbs, it is the French branch of Eurostat. The INSEE was created in 1946 as a successor to the Vichy regime's National Statistics Service (SNS). It works in close cooperation with the Institut national d'études démographiques (INED).

A national identification number, national identity number, or national insurance number or EMBG is used by the governments of many countries as a means of tracking their citizens, permanent residents, and temporary residents for the purposes of work, taxation, government benefits, health care, and other governmentally-related functions. 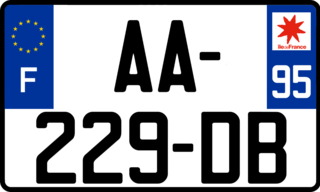 The unified civil number is a 10-digit unique number assigned to each Bulgarian citizen. It serves as a national identification number. An EGN is assigned to Bulgarians at birth, or when a birth certificate is issued. The uniform system for civil registration and administrative service of population regulates the EGN system.

Saint-Galmier is a city in eastern France. It is a communes in Loire department, and belongs to the arrondissement of Montbrison. Saint-Galmier covers an area of 19.5 square kilometers. As of January 1, 2018, it had a population of 5,737, ranking 1,903th among French communes.

The Republic of China national identification card, commonly known as the national identification card of Taiwan, is a compulsory identity document issued to people who hold both nationality and household registration in Taiwan. The National Identification Card served as the evidence for the household registration in Taiwan which grants the holder the right of abode and full civil and political rights in Taiwan. The card is used for virtually all other activities that require identity verification within Taiwan such as opening bank accounts and voting.

André Tulard (1899–1967) was a French civil administrator and police inspector. He is known for having created the "Tulard files," which censused Jews in Vichy France. Tulard was head of the Service of Foreigners and Jewish Affairs at the Prefecture of Police of Paris.

René Carmille was a French military officer, civil servant under the Republic and Vichy government, and member of the French Resistance. During World War II, in his office at the government's Demographics Department, he created the National Statistics Service and the individual code number which would become the social security number after liberation and is still used in France today. While there, Carmille sabotaged the Nazi census of France, thus saving tens of thousands of Jewish people from death camps.