Ian James Bryans (February 3, 1953 – August 1, 2015) was a Canadian football player who played for the Toronto Argonauts, Hamilton Tiger-Cats and Edmonton Eskimos. [1] He previously played football at the University of Western Ontario. [2]

Jerry Colangelo is an American businessman and sports executive. He formerly owned the Phoenix Suns of the NBA, the Phoenix Mercury of the WNBA, the Arizona Sandsharks of the Continental Indoor Soccer League, the Arizona Rattlers of the Arena Football League, and the Arizona Diamondbacks of Major League Baseball. He was also instrumental in the relocation of the original Winnipeg Jets team in the NHL to Phoenix to become the Phoenix Coyotes. In 2014, Grand Canyon University renamed its Christian based school of business after Jerry Colangelo, replacing Ken Blanchard's namesake. From December 2015 to April 2016, Colangelo served as Chairman of Basketball Operations for the Philadelphia 76ers, before serving as a special adviser to the team until December 2018.

Ian David McShane is an English actor, singer, and voice artist. He is known for his television performances, particularly the title role in the BBC series Lovejoy (1986–1994) and as Al Swearengen in Deadwood (2004–2006) and its 2019 film continuation, the original series garnering him the Golden Globe Award for Best Actor in a Television Series Drama and a nomination for Primetime Emmy Award for Outstanding Lead Actor in a Drama Series. He currently portrays Mr. Wednesday in American Gods (2017–present).

CJCL is a Canadian sports radio station in Toronto, Ontario. Owned and operated by Rogers Sports & Media since 2002, CJCL's studios are located at the Rogers Building at Bloor and Jarvis in downtown Toronto, while its transmitters are located near Grimsby atop the Niagara Escarpment. It is the flagship station for the Toronto Blue Jays,and also airs games from the Toronto Raptors, Toronto Maple Leafs, Buffalo Bisons and Buffalo Bills. CJCL is also a CBS Sports Radio affiliate. 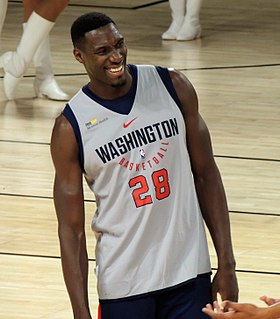 Ian Mahinmi is a French professional basketball player who is currently a free agent. At 6'11" and 250 lb, he plays the center position. He was selected with the 28th overall pick in the 2005 NBA draft by the San Antonio Spurs.

Ian Eagle is an American sports announcer. He calls NBA, NFL and college basketball games on CBS, TNT, TBS, Brooklyn Nets games on the YES Network and French Open tennis for Tennis Channel. Other announcing experiences include Army–Navy football games, boxing, and NCAA track and field for CBS. He is a graduate of Syracuse University. He is known as "Bird" or the "Birdman".

Bryan Paul Colangelo is an American basketball executive who is the former general manager of the Philadelphia 76ers, Toronto Raptors and Phoenix Suns of the National Basketball Association (NBA). He also served as president of basketball operations for Philadelphia and Toronto. He is the son of Phoenix sports mogul Jerry Colangelo. He graduated from Cornell University with a bachelor of science degree in business management and applied economics. He was the 2005 and 2007 recipient of the NBA Executive of the Year Award.

Bryan Bickell is a Canadian former professional ice hockey player who played for the Chicago Blackhawks and the Carolina Hurricanes of the National Hockey League (NHL). He won the Stanley Cup with the Chicago Blackhawks in 2013 and 2015, and played in four early playoff games during the team's run to the 2010 Stanley Cup championship. Bickell spent nearly 10 years with the Blackhawks organization before being traded to the Hurricanes before the 2016–17 season. He was diagnosed with multiple sclerosis later that year and retired from playing hockey at the end of the season.

Wallace F. Gabler III is a retired professional American football player. He was the starting quarterback for the 1965 Michigan Wolverines football team and played seven seasons in the Canadian Football League (CFL) as the starting quarterback for the Toronto Argonauts (1966–1969), Winnipeg Blue Bombers (1969–1970), and Hamilton Tiger-Cats (1970–1972). In seven years in the CFL, Gabler passed for 13,080 yards and 61 touchdowns.

Bryan Hall is an American football linebacker who is currently a free agent. In 2011, he signed with the Baltimore Ravens as an undrafted free agent. He played College football at Arkansas State. He has also been a member of the Hamilton Tiger-Cats and Toronto Argonauts of the CFL. 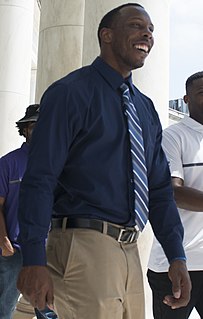 Otha Foster III is an American professional gridiron football defensive back currently playing for the Saskatchewan Roughriders of the Canadian Football League. He played college football at West Alabama. He has been a member of the Kansas City Chiefs and Baltimore Ravens of the NFL, and the Toronto Argonauts, Edmonton Eskimos and BC Lions of the CFL.

Bryan Burnham is a Canadian football wide receiver for the BC Lions of the Canadian Football League (CFL). Burnham played college football at the University of Tulsa. He signed as an undrafted free agent with the BC Lions in 2014. He is from Moorestown, New Jersey.

The Raptors 905 are a Canadian professional basketball team located in Mississauga, Ontario. The club competes in the NBA G League, and began play in the 2015–16 season. The club, which is the NBA G League affiliate of the National Basketball Association (NBA)'s Toronto Raptors, plays their home games at the Paramount Fine Foods Centre, replacing the Centre's former basketball tenant, the Mississauga Power of the National Basketball League of Canada. The team often plays home games at the Scotiabank Arena, the home of their parent club, the Toronto Raptors. The Raptors 905 is the eighth NBA G League team to be owned by an NBA team and the first NBA G League team to be located outside of the United States. 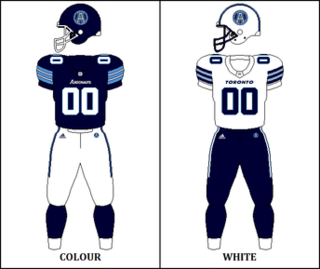 The 2016 Toronto Argonauts season was the 59th season for the team in the Canadian Football League and their 144th season overall. The Argonauts finished in 4th place in the East Division with a 5–13 record and missed the playoffs for the second time in three years.

Ihor Yavorskyi is a Ukrainian former footballer and football manager.

Ian Thomas is an American football tight end for the Carolina Panthers of the National Football League (NFL). He played college football at Indiana, and was drafted by the Panthers in the fourth round of the 2018 NFL Draft.