Last updated January 25, 2020
Countries in the Americas which were formerly colonies of Spain or Portugal

The prefix Ibero- and the adjective Iberian refer to the Iberian Peninsula in Europe, which includes Portugal and Spain. Ibero-America includes all Spanish-speaking countries in North, Central, and South America, plus the Portuguese-speaking country of Brazil. Ibero-America is differentiated from Latin America by the exclusion of the French-speaking country of Haiti, the French-speaking Canadian province of Quebec, the French overseas departments of French Guiana, Martinique and Guadeloupe, and the French collectivities of Saint Martin and Saint Barthélemy. In addition, the countries of Belize, Guyana and Suriname, whose official languages are English, English and Dutch, respectively, are not considered to be either Ibero-American or Latin American.

Since 1991, the Iberoamerican Community of Nations organized a yearly Ibero-American Summit meeting of the heads of state and governments of the Ibero-American countries, including Spain, Portugal and Andorra, [3] [4] this has since changed to biannually from 2014.

Countries and population in Europe and the Americas

The term Hispanic refers to persons, cultures, or countries related to the Spanish language, Spanish culture, Spanish people, or to Spain in general.

The Iberian Romance, Ibero-Romance or simply Iberian languages, is an areal grouping of Romance languages that developed on the Iberian Peninsula, an area consisting primarily of Spain, Portugal, Gibraltar and Andorra, and in southern France which are today more commonly separated into West Iberian and Occitano-Romance language groups.

The Community of Portuguese Language Countries, also known as the Lusophone Commonwealth, is an international organization and political association of Lusophone nations across four continents, where Portuguese is an official language. The CPLP operates as a privileged, multilateral forum for the mutual cooperation of the governments, economies, non-governmental organizations, and peoples of the Lusofonia. The CPLP consists of 9 member states and 19 associate observers, located in Europe, the Americas, Asia, and Africa.

Organización de Telecomunicaciones de Iberoamérica (OTI), formerly known as Organización de Televisión Iberoamericana (Spanish), Organização de Televisão Ibero-Americana (Portuguese) (OTI) or "Organization of Iberoamerican Television" (OIT), is an organization of television networks in Latin America (Ibero-America), Spain, and Portugal. Its mission is to foster relations between television networks in the region. Among other activities, it shares news, cultural, educational and sports programming among its members. 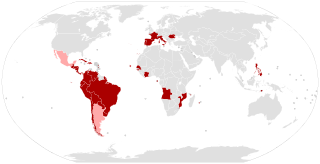 The Latin Union was an international organization of nations that used Romance languages that existed as a functional institution from 1983 to 2012. Its aim was to protect, project, and promote the common cultural heritage of Latin peoples and unifying identities of the Latin, and Latin-influenced, world. It was created in 1954 in Madrid, Spain, and its membership rose from 12 to 36 states, including countries in North America, South America, Europe, Africa, and the Asia-Pacific region.

Lusitanic is a term used to refer to persons who share the linguistic and cultural traditions of the Portuguese-speaking nations, territories, and populations, including Portugal, Brazil, Macau, Timor-Leste, Angola, Mozambique, Cape Verde, São Tomé and Príncipe, Guinea Bissau and others, as well as the Portuguese diaspora generally. 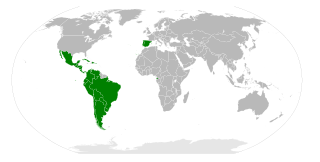 The Organization of Ibero-American States, formally the Organization of Ibero-American States for Education, Science and Culture, is an international organization made up of 23 members states of Iberophone nations in Europe and the Americas, as well as one member in Africa. The OEI's membership is composed of all of the sovereign states of Ibero-America and the Iberian Peninsula, as well as Equatorial Guinea. All members are Portuguese and Spanish speaking nations, in addition to Andorra, which is predominantly Catalan speaking, though the organization does not include all the Iberophone nations of the world.

OTI Festival was an annual singing competition, held between 1972 and 2000 among active member countries of the Organización de Televisión Iberoamericana (OTI). It was preceded in 1969 and 1970 by the Festival Mundial de la Canción Latina, held in Mexico. 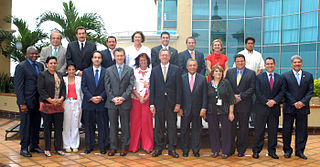 The Union of Ibero-American Capital Cities, UCCI, is an international, non-governmental organization of 29 major Ibero-American cities that fosters ties and friendly relations between its members. Founded in October 1982, the union is headquartered in Madrid.

The Organization of Ibero-American States has the below 23 member states:

The Asociación Iberoamericana de Atletismo is the governing body for the sport of athletics of European, Latinamerican, and African countries with iberian origin and/or Spanish or Portuguese language. Current president is Oscar Fernández Cáceres from Perú.

The Three Linguistic Spaces is a structure for cooperation between the French speaking space, the Spanish speaking space and the Portuguese speaking space. It is led by the Organization of Ibero-American States (OEI), the Community of Portuguese Language Countries (CPLP) and the International Organisation of La Francophonie (OIF). 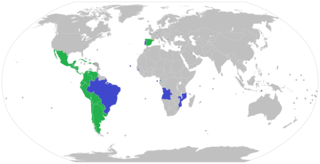 The Asociación de Estados Iberoamericanos para el Desarrollo de las Bibliotecas Nacionales de Iberoamérica (ABINIA) is an association of Ibero-American national libraries. It began in Mexico on 14 December 1989 as the Asociación de Bibliotecas Nacionales de Iberoamérica. In 1999 the group adopted its current name. As of 2019 it operates from headquarters in Caracas, Venezuela. Official languages of the group are Spanish and Portuguese.

Andorra–Chile relations refers to the diplomatic relations between the Principality of Andorra and the Republic of Chile. Both nations are members of the Organization of Ibero-American States and the United Nations.