Ibrahimkhel or Ibrahimkhil (Pashto:ابراهيمخيل) is a major Pashtun tribe, living in places such as Kabul, Kandahar, Paktia, Paktika, Laghman, Jowzjan, Qunduz, Mazar-e-sharif, Herat, Peshawar, Quetta Upper Dir and some other parts of Pakistan, as well as in a small village of Swat district named Biha near Matta. All the historical references show that the Ibrahimkhel are the descendants of the Ghiljis.[ citation needed ]

The Ibrahimkhel are known to be the most prevalent sub-tribe of the Babars. They primarily reside in Pirpiai, Chaudhwan, Multan, Ibrahimkhel Kot, Zhob, Qila Saifullah, Dera Ghazi Khan in Pakistan. In Afghanistan, they have communities in Kandahar and Sheberghan. In India, they settled in the district of Bulandshahr [ citation needed ] 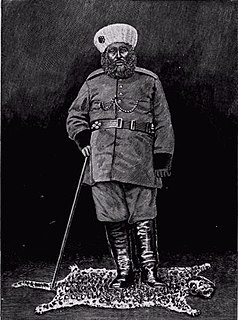 Abdur Rahman Khan was Emir of Afghanistan from 1880 to 1901. He is known for uniting the country after years of internal fighting and negotiation of the Durand Line Agreement with British India.

Kandahār is one of the thirty-four provinces of Afghanistan, located in the southern part of the country next to Pakistan. It is surrounded by Helmand in the west, Uruzgan in the north and Zabul Province in the east. Its capital is the city of Kandahar, Afghanistan's second largest city, which is located on the Arghandab River. The greater region surrounding the province is called Loy Kandahar.

Mohmand (Pashto:مومند) is a Pashtun tribe, known historically as a tribal son of Daulatyar and tribal grandson of Ghoryakhel. They live primarily in the eastern districts of Nangarhar Province, Afghanistan, and the Mohmand District of Khyber Pakhtunkhwa, Pakistan. 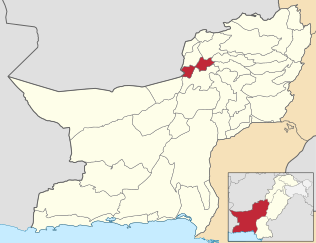 Waziristani, also known as Wazirwola, Waziri, Dawari, or Masidwola, is an east-central Pashto dialect spoken in North Waziristan, South Waziristan, and parts of Bannu and Tank in Pakistan, and in certain adjacent districts of Paktika, Khost and Paktia provinces of Afghanistan.

Mohammadzai, also spelled "Moḥammadzay" is a sub-tribe or clan of the Barakzai which is part of the Durrani confederacy of tribes. They are primarily centered on Kandahar, Kabul and Ghazni in Afghanistan. The Mohammadzai ruled Afghanistan from 1826 to 1978, for a total 152 years. The monarchy ended under Mohammad Zahir Shah when his brother in law Sardar Daoud Khan took power via a coup.

The Khalil is a Pashtun Ghoryakhel subtribe primarily living in the Peshawar Valley of Khyber Pakhtunkhwa, Pakistan, with some members in Nangarhar, Herat, Ghazni, and Kandahar in Afghanistan. The Khalils settled to the west and south-west of Daudzai tribe.

The following lists events that happened during 1994 in Afghanistan.

Sirkanay District is situated in the central part of Kunar Province, Afghanistan. It borders Pakistan to the south. The population is 30,292 (2019). The district administrative center is the village of Serkanay at 775 m altitude. To the north the district borders the Kunar River, which irrigates the small part of arable land. Drought is the major problem of the people. The majority of the houses (70%) were destroyed during the wars. Many young men live and work in Pakistan.

AVT Khyber or Khyber TV is a Pakistani-operated Pashto satellite television channel in Pakistan, which was launched in July 2004. The channel broadcasts 24 hours a day, providing educational, news, variety shows, dramas, and entertaining programs to the Pashtun population of Pakistan and Afghanistan as well as those living in the Middle East, Europe and Australia. Unlike most TV stations in Pakistan, AVT programs are only in Pashto language.

Abdul Hai Habibi – ʿAbd' ul-Ḥay Ḥabībi) was a prominent Afghan historian for much of his lifetime as well as a member of the National Assembly of Afghanistan during the reign of King Zahir Shah. A Pashtun nationalist from Kakar tribe of Kandahar, Afghanistan, he began as a young teacher who made his way up to become a writer, scholar, politician and Dean of Faculty of Literature at Kabul University. He is the author of over 100 books but is best known for editing Pata Khazana, an "old" Pashto language manuscript that he claimed to have "discovered" in 1944; the academic community, however, does not acknowledge the manuscript as genuine.

The term "Balailzai,panni(panri))" refers to a Pashtun tribe in Afghanistan and Pakistan. Another name for the tribe of balailzai. Like other Pashtuns, they have Eastern Iranian genetic and ethnolinguistic heritage. They descended from Gharghasht, one of Qais Abdur Rashīd's sons. Most are settled in parts of Pakistan or Afghanistan, such as Karachi, Quetta, Musakhail, Dera Ismail Khan, Mardan, Peshawar, Panni, Haripur, Kabul, Tank, Kohat, Sibi ,while there are some communities in the United States, United Kingdom, and other Western countries. They were, at one point in time, were holding main posts in the Government especially during the rule of Bahlol Lodhi. After his reign ended, they scattered and migrated to various parts of the Indian subcontinent and the Middle East. Panni are migrated to South India. Most of the Panni's are settled in Pakistan.