Icelandic folk music includes a number of styles that are together a prominent part of the music of Iceland. When speaking of traditional Icelandic vocal music, there are two prominent vocal performance styles, one using the term kveða and the other syngja. The first is a performance practice referred to as kveðskapur or kvæðaskapur. Kveðskapur is also the generic Icelandic term for poetry. The term syngja translates as to sing. Kveðskapur was very connected to sagnadansar, or traditional dancing (literally "story dancing"). Víkivaki is the best known of the sagnadansar, and its origin can be traced to the 11th century. Víkivaki saw a decline at the beginning of the 20th century, although efforts are being made to keep it alive.

While the prevalence of instrumental music before the 20th century is widely debated, folk instruments include the langspil and fiðla (Icelandic fiddle). Both instruments are in the zither family and are primarily played with a bow. Though very little is known about the fiðla, the langspil is closely related to the pan-European Scheitholt and Appalachian dulcimer. [1]

Traditional Icelandic folk music remained widely performed into the last decades of the 19th century, when folk collecting began in the country. However, the advent of Western classical music and other foreign influences in the same period began leading to a decline in traditional music. Later, the arrival of popular music furthered this change; some folk music was recorded between the World Wars, but intense collecting did not begin in earnest until recently. [2]

Rímur is a type of epic vocal poem, with fixed diatonic melodies (except in Breiðafjörður, the district where the traditional music is oldest in style, and folk melodies are variable, not based on fixed scales). Rímur melodies (rímnalög, kvæðalög, stemmur) are often standard, and found throughout the country. These epic poems are written in a narrative style, using elements of Icelandic literature and folklore. The performers were lauded for their ability to tell a story in verse.

A rímur verse is made up of trochaic lines which use literary techniques such as rhyme and alliteration. There are between two and four lines with a pattern of syllabic stress and alliteration. Music author Hreinn Steingrímsson describes rímur this way:

The earliest known text of a rímur dates to the 14th century; for the subsequent six hundred years, the rímur texts were the most prolifically produced form of Icelandic literature. Rímur melodies date back to publications by folklorist Ólafur Davíðsson and were then collected in the first Icelandic folk music collection, Íslenzk þjóðlög, by Bjarni Þorsteinsson.

Rímur, especially the short four-line metres form "ferskeytla", is still very popular today in Iceland in most social groups. It is common to put together a ríma (setja saman stöku) about current events usually in the form of a joke or ridicule. These short rhymes tend to proliferate via email. It is also common during parties that a guest may say a ríma that he has learned or composed as a form of a joke, often an insult. Skill at composing rímur is often admired. A common game is to tell the first part ("fyrri partur", the first two lines) of a ríma, and for others to complete the third and fourth lines (to "botna"), each in their own way. The one whose "botn" is the cleverest wins. This game can become a serious competition (known as "kveðast á") when two or more who are particularly skilled at composing rímur come together. It is an informal rule that if one is ridiculed or even insulted with a ríma he must answer back in kind; any other form of answer is invalid. Use of rímur as a form of joke or games is most common in relation to inland travel and sports such as horsemanship but also in relation to cultural/seasonal periods like Þorri as well as in political circles. Many members of parliament pride themselves on being good at composing rímur and using them to ridicule each other, or opposing parties, in a friendly manner.

An epic poem, epic, epos, or epopee is a lengthy narrative poem, ordinarily involving a time beyond living memory in which occurred the extraordinary doings of the extraordinary men and women who, in dealings with the gods or other superhuman forces, gave shape to the mortal universe for their descendants, the poet and his audience, to understand themselves as a people or nation.

In poetry, a hendecasyllable is a line of eleven syllables. The term "hendecasyllabic" is used to refer to two different poetic meters, the older of which is quantitative and used chiefly in classical poetry and the newer of which is accentual and used in medieval and modern poetry. It is often referred to when an iambic parameter contains 11 syllables.

A rhyme is a repetition of similar sounds in the final stressed syllables and any following syllables of two or more words. Most often, this kind of perfect rhyming is consciously used for effect in the final positions of lines of poems and songs. More broadly, a rhyme may also variously refer to other types of similar sounds near the ends of two or more words. Furthermore, the word rhyme has come to be sometimes used as a shorthand term for any brief poem, such as a rhyming couplet or nursery rhyme.

Sheet music is a handwritten or printed form of musical notation that uses musical symbols to indicate the pitches, rhythms or chords of a song or instrumental musical piece. Like its analogs – printed books or pamphlets in English, Arabic or other languages – the medium of sheet music typically is paper, although the access to musical notation since the 1980s has included the presentation of musical notation on computer screens and the development of scorewriter computer programs that can notate a song or piece electronically, and, in some cases, "play back" the notated music using a synthesizer or virtual instruments.

Assonance is a resemblance in the sounds of words/syllables either between their vowels or between their consonants. However, assonance between consonants is generally called consonance in American usage. The two types are often combined, as between the words six and switch, in which the vowels are identical, and the consonants are similar but not completely identical. If there is repetition of the same vowel or some similar vowels in literary work, especially in stressed syllables, this may be termed "vowel harmony" in poetry. 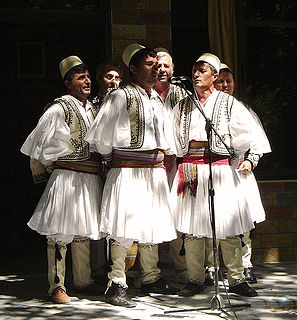 The Music of Albania is associated with the country of Albania and Albanian communities. Music has a long tradition in the country and is known for its regional diversity, from the Ghegs in the North to the Tosks in the South. It is an integral part of the national identity, strongly influenced by the country's long and turbulent history, which forced Albanians to protect their culture from their overlords by living in rural and remote mountains.

In Icelandic literature, a ríma is an epic poem written in any of the so-called rímnahættir. They are rhymed, they alliterate and consist of two to four lines per stanza. The plural, rímur, is either used as an ordinary plural, denoting any two or more rímur, but is also used for more expansive works, containing more than one ríma as a whole. Thus Ólafs ríma Haraldssonar denotes an epic about Ólafr Haraldsson in one ríma, while Núma rímur are a multi-part epic on Numa Pompilius.

The music of Crete, also called kritika, refers to traditional forms of Greek folk music prevalent on the island of Crete in Greece. Cretan traditional music includes instrumental music, a capella songs known as the rizitika, "Erotokritos," Cretan urban songs (tabachaniotika), as well as other miscellaneous songs and folk genres.

This is an article on the terminology used to describe the music of Italy. There is also an article on Italian musical terms used in English.

The épinette des Vosges is a traditional plucked-string instrument of the zither family, whose use was confined to two areas in the Vosges mountains of France approximately 50 km apart: around Val-d'Ajol and around Gérardmer.

The langspil is a traditional Icelandic drone zither. It has a single melody string and usually 2 drone strings.

Stephen L. (Lucky) Mosko was an American composer. His music blended high modernism with world music, and he was an expert in Icelandic folk music. His, "seemingly contradictory," influences include uptown, downtown, and the West Coast school; including John Cage, Milton Babbitt, Elliott Carter, Morton Feldman, and Mel Powell.

Ferskeytt is an Icelandic stanzaic poetic form. It is a kind of quatrain, and probably first attested in fourteenth-century rímur such as Ólafs ríma Haraldssonar. It remains one of the dominant metrical forms in Icelandic versifying to this day.