Ida Rhodes (born Hadassah Itzkowitz; May 15, 1900 – February 1, 1986 [1] ) was an American mathematician who became a member of the clique of influential women at the heart of early computer development in the United States.

Hadassah Itzkowitz was born in a Jewish village between Nemyriv and Tulchyn in Ukraine. She was 13 years old in 1913 when her parents, David and Bessie (née  Sinkler) Itzkowitz, brought her to the United States. Her name was changed upon entering the country to Ida Rhodes. [1]

Rhodes had her first encounter with Albert Einstein in 1922 and encountered him again in 1936 at Princeton, where a group of mathematicians traveled to spend the weekend in informal seminars. She later studied at Columbia University in 1930–31. She held numerous positions involving mathematical computations before she joined the Mathematical Tables Project in 1940, where she worked under Gertrude Blanch, whom she would later credit as her mentor.

Ida Rhodes was a pioneer in the analysis of systems of programming, and with Betty Holberton designed the C-10 programming language in the early 1950s for the UNIVAC I. [2] She also designed the original computer used for the Social Security Administration. In 1949, the Department of Commerce awarded her a Gold Medal for "significant pioneering leadership and outstanding contributions to the scientific progress of the Nation in the functional design and the application of electronic digital computing equipment".

Though she retired in 1964, Rhodes continued to consult for the Applied Mathematics Division of the National Bureau of Standards until 1971. Her work became much more widely known after her retirement, as she took the occasion to travel around the globe, lecturing and maintaining international correspondence. In 1976, the Department of Commerce presented her with a further Certificate of Appreciation on the 25th Anniversary of UNIVAC I, and then at the 1981 Computer Conference cited her a third time as a "UNIVAC I pioneer." She died in 1986.

In an unusual case of an old specialized algorithm still in use, and still credited to the original developer, Rhodes was responsible for the "Jewish Holiday" algorithm used in calendar programs to this day. [2] [3] While at the National Bureau of Standards (now NIST), she also did original work in machine translation of natural languages. [4] [5]

In cryptography, key size or key length is the number of bits in a key used by a cryptographic algorithm. 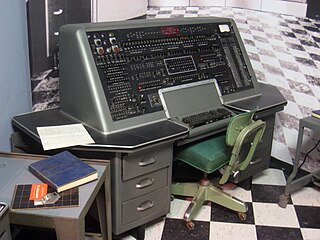 The UNIVAC I was the first general purpose electronic digital computer design for business application produced in the United States. It was designed principally by J. Presper Eckert and John Mauchly, the inventors of the ENIAC. Design work was started by their company, Eckert–Mauchly Computer Corporation (EMCC), and was completed after the company had been acquired by Remington Rand. In the years before successor models of the UNIVAC I appeared, the machine was simply known as "the UNIVAC".

John Edward Hopcroft is an American theoretical computer scientist. His textbooks on theory of computation and data structures are regarded as standards in their fields. He is the IBM Professor of Engineering and Applied Mathematics in Computer Science at Cornell University.

Gertrude Blanch was an American mathematician who did pioneering work in numerical analysis and computation. She was a leader of the Mathematical Tables Project in New York from its beginning. She worked later as the assistant director and leader of the Numerical Analysis at UCLA computing division and was head of mathematical research for the Aerospace Research Laboratory at Wright-Patterson Air Force Base in Dayton, Ohio.

The Mathematical Tables Project was one of the largest and most sophisticated computing organizations that operated prior to the invention of the digital electronic computer. Begun in the United States in 1938 as a project of the Works Progress Administration (WPA), it employed 450 unemployed clerks to tabulate higher mathematical functions, such as exponential functions, logarithms, and trigonometric functions. These tables were eventually published in a 28 volume set by Columbia University Press. 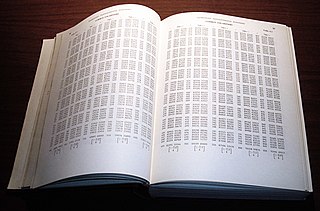 SEAC was a first-generation electronic computer, built in 1950 by the U.S. National Bureau of Standards (NBS) and was initially called the National Bureau of Standards Interim Computer, because it was a small-scale computer designed to be built quickly and put into operation while the NBS waited for more powerful computers to be completed. The team that developed SEAC was organized by Samuel N. Alexander. SEAC was demonstrated in April 1950 and was dedicated on June 1950; it is claimed to be the first fully operational stored-program electronic computer in the US.

The SWAC was an early electronic digital computer built in 1950 by the U.S. National Bureau of Standards (NBS) in Los Angeles, California. It was designed by Harry Huskey. Like the SEAC which was built about the same time, the SWAC was a small-scale interim computer designed to be built quickly and put into operation while the NBS waited for more powerful computers to be completed.

Éva Tardos is a Hungarian mathematician and the Jacob Gould Schurman Professor of Computer Science at Cornell University.

Evelyn Boyd Granville was the second African-American woman to receive a Ph.D. in mathematics from an American University; she earned it in 1949 from Yale University. She performed pioneering work in the field of computing.

Irene Ann Stegun was a mathematician at the National Bureau of Standards who, with Milton Abramowitz, edited a classic book of mathematical tables called A Handbook of Mathematical Functions, widely known as Abramowitz and Stegun. When Abramowitz died of a heart attack in 1958, Stegun took over management of the project and finished the work by 1964, working under the direction of the NBS Chief of Numerical Analysis Philip J. Davis, who was also a contributor to the book.

Etta Zuber Falconer was an educator and mathematician the bulk of whose career was spent at Spelman College, where she eventually served as department head and associate provost. She was one of the earlier African-American women to receive a Ph.D. in mathematics.

Joan Feigenbaum is a theoretical computer scientist with a background in mathematics. She is the Grace Murray Hopper Professor of Computer Science at Yale University. At Yale she also holds a courtesy appointment in the Department of Economics. Feigenbaum co-invented the computer-security research area of trust management. 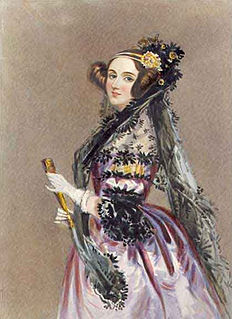 This is a timeline of women in computing. It covers the time when women worked as "human computers" and then as programmers of physical computers. Eventually, women programmers went on to write software, develop Internet technologies and other types of programming. Women have also been involved in computer science, various related types of engineering and computer hardware.

Carla Pedro Gomes is a Portuguese-American computer scientist and professor at Cornell University. She is the founding Director of the Institute for Computational Sustainability and is noted for her pioneering work in developing computational methods to address challenges in sustainability. She has conducted research in a variety of areas of artificial intelligence and computer science, including constraint reasoning, mathematical optimization, and randomization techniques for exact search methods, algorithm selection, multi-agent systems, and game theory. Her work in computational sustainability includes ecological conservation, rural resource mapping, and pattern recognition for material science.

Jill Loraine Zimmerman is an American computer scientist and the James M. Beall Professor of Mathematics and Computer Science at Goucher College. Since 2006, she has been the head of the Goucher Robotics Lab.