Kalynets was born in Khodoriv, the son of an agronomist. His parents upheld Ukrainian cultural traditions. As a child, Kalynets read banned literature in the Ukrainian language, and watched the mass deportations of Ukrainians by the communists. He graduated from Lviv University in 1961. He began writing in the 1950s, and his first book of poetry was published in 1966. Because of censorship, the rest of his works were published in the West. [1]

One of the main themes of Kalyntes' poetry is cultural glorification. [2] Much of his writing uses a vocabulary full of cultural allusions. His work reflects his pride in Ukrainian culture and the country's ancient pagan and early Christian heritage. In Kupalo's Fire (1966), Kalynets connects the country's folklore and ancient traditions to modern, Soviet life. Most of his works do not contain glaring political criticisms, rather unexpressed denunciation. He drew strong influence from Bohdan Ihor Antonych, and dedicated one of his poems to him. He also dedicated poems to various Ukrainian cultural icons, including Taras Shevchenko, filmmaker Alexander Dovzhenko, and composer Stanislav Liudkevych among others. He refused to dedicate any poems to the Soviet leaders, breaking from the custom which was typical among poets in that time. [3]

As a "Ukrainian bourgeois nationalist", opposed to the policies of russification and general Soviet lawlessness, he was sentenced to nine years in a labour camp and exile. [4] His wife, Iryna, was arrested in January 1972. Kalynets refused to cooperate with the KGB and began behaving in a defiant manner.

In March 1971, the 24th Congress of the Communist Party of Ukraine denounced Kalynets' poetry as "reprehensible", made worse by the fact that he allowed his work to be published in the West. He was then indicted on the grounds that he "issues a veiled appeal to struggle against the Soviet government", "calls for a revival of the Uniate Church", "covertly presents the idea that the Ukrainian people is oppressed by the Soviet government", and "articulates a nationalist ideology, as well as nostalgia for the past and for an independent state". On 11 August 1972, he was arrested, and on 15 November 1972, he was convicted for anti-Soviet activities by a closed court and sentenced to six years in labour camps and three years in exile. [5] He served out his sentences in the Perm political labour camps, first at No. 35 at Vsechsvyatskaya, but he was then moved to No. 36 in the village of Kutchino, Perm Region. While in prison, he took part in the resistance movement. He was involved with hunger strikes, the writing of appeals and the writing of chronicles of the two camps.

He was married to poet and fellow dissident, the late Iryna Kalynets (died 31 July 2012, aged 72), [6] who also actively opposed the suppression of the Uniate Church and was a professor of Ukrainian language and literature at the Polytechnical Institute of Lviv. She was sentenced to six years at hard labor. [ when? ] 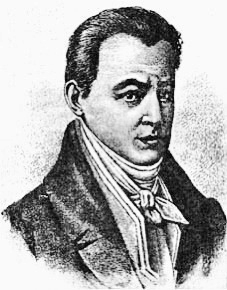 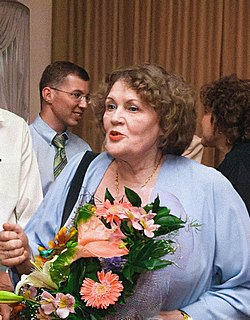 Lina Vasylivna Kostenko is a Ukrainian poet and writer, recipient of the Shevchenko Award (1987).

Khodoriv is a town in the Zhydachiv Raion, Lviv Oblast of western Ukraine. Its population is approximately 9,605 (2017 est.).

Vasyl Semenovych Stus was a Ukrainian poet, translator, literary critic, journalist, and an active member of the Ukrainian dissident movement. For his political convictions, his works were banned by the Soviet regime and he spent 13 years in detention, until his death in Perm-36—then a Soviet forced labor camp for political prisoners, subsequently The Museum of the History of Political Repression—after having declared a hunger strike on September 4, 1985. On November 26, 2005, the Ukrainian president Viktor Yushchenko posthumously awarded him the highest national title: Hero of Ukraine. Stus is widely regarded as one of Ukraine's foremost poets.

Oleh Lysheha was a Ukrainian poet, playwright, translator and intellectual. Lysheha entered Lviv University in 1968, where during his last year, he was expelled for his participation in an "unofficial" literary circle, Lviv Bohema. As punishment, Lysheha was drafted into the Soviet army and internally exiled. During the period 1972-1988, he was banned from official publication, but in 1989 his first book Great Bridge was published. For "The Selected Poems of Oleh Lysheha," Lysheha and his co-translator James Brasfield from Penn State University, received the 2000 PEN Award for Poetry in Translation published by the Harvard Ukrainian Research Institute. Lysheha is the first Ukrainian poet to receive the PEN award. 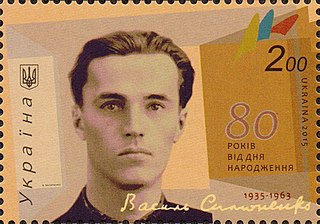 Vasyl Symonenko a well-known Ukrainian poet, journalist, activist of dissident movement. He is considered one of the most important figures in Ukrainian literature of the early 1960s. By the opinion of the Museum of dissident movement in Kiev, the works and early death of Vasyl Symonenko had an enormous impact on the rise of the national democratic movement in Ukraine.

Mykola Danylovych Rudenko was a Ukrainian poet, writer, philosopher, Soviet dissident, human rights activist and World War II veteran. He was the founder of the Ukrainian Helsinki group, and was twice arrested for his dissident activities.

Myroslav Frankovych Marynovych is a vice-rector of the Ukrainian Catholic University in Lviv, social activist, co-founder of Amnesty International Ukraine, and a founding member of the Ukrainian Helsinki Group

Ihor Pavlyuk is a Ukrainian writer, translator and research worker.

Mykhaylo Osadchy was a Ukrainian journalist, poet, writer, and dissident.

Богдан Сорока (ukrainian) (1940-2015) was one of the most prominent Ukrainian graphic artists of his generation. He worked in black-and-white, and later in his life added color linocut technique. He belonged to the generation of Ukrainian artists of the 1960s who used their art as protest against the oppressive Soviet regime. His work in graphic arts is characterized by its expressionistic style and imaginative pictorial representations. He is also a strong communicator and his prowess lies in his ability to speak to the viewer directly and clearly through the images he puts on paper. Soroka often drew inspiration for his works from Ukrainian folklore, evident in his print series such as “Folkloric Motives”, “Slavic Mythology”, “Kupalo Festival Games”, and “Proverbs”.