Impact of the COVID-19 pandemic on education in Ghana

Most governments decided to temporarily close educational institutions in an attempt to reduce the spread of COVID-19. [1] As of 12 January 2021, approximately 825 million learners are currently affected due to school closures in response to the pandemic. According to UNICEF monitoring, 23 countries are currently implementing nationwide closures and 40 are implementing local closures, impacting about 47 percent of the world's student population. 112 countries' schools are currently open. [2]

School closures impact not only students, teachers, and families. [5] but have far-reaching economic and societal consequences. [6] [7] [8] School closures in response to the pandemic have shed light on various social and economic issues, including student debt, [9] digital learning, [8] [10] [11] food insecurity, [12] and homelessness, [13] [14] as well as access to childcare, [15] health care, [16] housing, [17] internet, [18] and disability services. [19] The impact was more severe for disadvantaged children and their families, causing interrupted learning, compromised nutrition, childcare problems, and consequent economic cost to families who could not work. [20] [21]

In response to school closures, UNESCO recommended the use of distance learning programs and open educational applications and platforms that schools and teachers can use to reach learners remotely and limit the disruption of education. [22] Colleges have scrambled to find creative solutions to teaching students online, in-person but socially distant, or in a hybrid format. [23]

Basic schools, senior high schools and universities, both public and private, have also been closed. Only BECE and WASSCE candidates were permitted to remain in school under social distancing protocols. [24]

The GES and Zoomlion Ghana Limited also joined forces to launch an initiative to fumigate all senior high, special and technical schools in the country to curb the spread of the pandemic. [25]

The President in his address to the nation, assured parents of students to be calm over the reopening of schools amidst the increasing number of coronavirus in Ghana. [27]

Students of Accra Girls School were to undergo mass testing for COVID-19 disease after it was reported some students tested positive for the virus. [28]

The GES maintained that final year SHS students would write their WASSCE exams despite COVID-19 fears. [29]

The COVID-19 team of the NDC proposed mass testing of students and the closure of schools as cases were been recorded and continued to rise. [30]

The Minister for Education who recovered from the virus led a campaign against the stigmatization of people infected with COVID-19. [31]

The president asked students and teachers to abide by the COVID-19 protocols who would be involved in the conduct of the 2020 final year exams. [32]

GES and GHS issued a joint statement stating, “any school where no positive case of COVID-19 has been recorded, the students can vacate and go home." due to COVID-19 infections recorded in some schools. [33]

The VC of UG revealed the mode of teaching and learning to curb the spread of COVID-19. [34]

An organization appealed to Government to provide PPEs to schools during their reopening. [35]

An organization asked the Government to take into consideration the reopening of schools in January 2021. [37] The organization hailed the Government for its decision to reopen schools. [38] The President claimed it was safe for schools to resume for academic activities and he mentioned the dates of amdist COVID-19 resumption. [39] [40]

The MoE released a document of the approved calendar from KG to SHS to curb the spread of the virus. [41]

The Director-General of GES revealed JHS students would run a semester system with the observance of the protocols. [42] He also cautioned schools not to charge or ask for COVID-19 tests before students are admitted. [43] UG adopted the double track system to help reduce the spread of the virus among staff, students and lecturers. [44] Students in the university resisted the double track system. [45] The university partnered with Zoomlion to disinfect the institution. [46] A student advised the university to enforce the COVID-19 protocols. [47] The University claimed it would punish students who fail to observe the safety protocols. [48]

MoE revealed private schools would be provided with PPEs and the schools would also be fumigated for free. [49] MoE told school authorities to contact their local assemblies for PPEs. [50] It appealed with parents to support the government to provide PPEs to every school. [51]

Students arrived in the various universities as directed by the President for reopening of schools. [52]

Some Accra students were 'excited' schools reopened. [53] An association claimed about 651,000 children were expected back to school. [54] School children returned to schools amid observing the safety protocols. [55]

The GES claimed it would ensure schools are safe for teaching and learning, [56] it issued some guidelines to be followed, [57] it also urged parents to protect their children from the virus, [58] it also claimed all schools were presented with PPEs. [59] The institution was urged to enforce the protocols in schools for assurance to parents. [60] The institution claimed it trained 52,000 teachers to assist halt the spread of the virus in schools. [61] The GES with the support from the government decided to provide laptops to teachers for use during the COVID-19 era. [62] The institution claimed it would increase surveillance and intensify contact tracing in schools in Ghana. [63]

NUGS appealed to the parliament to consider the motion for free tertiary due to the impact of the pandemic. [64] The Speaker of Parliament urged the leadership of the political parties to aid streamline the motion for free tertiary. [65] An MP claimed stopping students from payment of fees in tertiary institutions would be a minimal cost to the country. [66] Parliament voted against free tertiary for students. [67] The VC of Pentecost University supported calls for absorption of fees for tertiary students. [68]

The administration of UPSA claimed it would mix online and physical teaching and learning for the 2020/21 academic year due to the pandemic. [69]

A Clinical Microbiologist, Dr Michael Owusu claimed the government might be forced to shut down schools. [70]

A Conference of Directors appealed to the GES to take action on PPEs in institutions. [71]

An authority warned school authorities to enforce the safety protocols. [72]

The President of an association blamed parents for the challenges they faced to curb the spread of the virus in schools. [73]

The Chairman of Vice-Chancellors Ghana claimed cases recorded in some universities in the country were managed. [79]

The National Schools Inspectorate Authority called on schools to report COVID-19 cases to the GHS. [80]

The Board Chairman of a school claimed private schools were affected by the pandemic. [84]

COVID-19 pandemic was claimed to have provided the opportunity to strengthen online studies. [85]

Private schools in the country were claimed they were still in hardships due to the pandemic. [86] 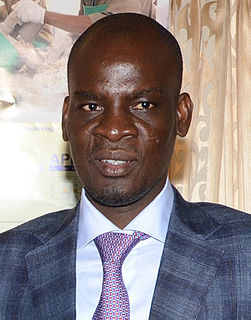 Haruna Iddrisu is a Ghanaian lawyer and politician who is a member of the Seventh Parliament of the Fourth Republic of Ghana representing Tamale South. He is also currently the Minority Leader in Ghana's Parliament.

Kojo Vincent Oppong Nkrumah is a Ghanaian politician and lawyer. He is the member of parliament for the Ofoase-Ayirebi constituency.

Adina Thembi Ndamse better known by her stage name Adina is a Ghanaian-South African singer, songwriter, actress and sometimes a model. She was the winner of music reality show Stars of the Future in 2008. Her eighth music single titled "Too Late" won her two awards – Record of the Year and Best Female Vocalist of the Year at the 2018 Vodafone Ghana Music Awards in Ghana. In March 2021, she was among the Top 30 Most Influential Women in Music by the 3Music Awards Women’s Brunch.

Carlos Kingsley Ahenkorah is a Ghanaian politician and Member of Parliament of Tema West constituency. Also, he was a Deputy Minister for Trade and Industry in Ghana. He is also the CEO of Carlos King Freight Services.

Henry Quartey is a Ghanaian politician and member of the Seventh Parliament of the Fourth Republic of Ghana representing the Ayawaso Central Constituency in the Greater Accra Region on the ticket of the New Patriotic Party. He is currently the Minister for Greater Accra Region.

Celestine Donkor is a Ghanaian gospel musician and songwriter. In March 2021, she was among the Top 30 Most Influential Women in Music by the 3Music Awards Women’s Brunch. She founded the Celestial Praise, an annual Gospel music concert.

Veronica Bucket is a mechanism for hand washing originating in Ghana which consists of a bucket of water with a tap fixed at the bottom, mounted at hand height, and a bowl at the bottom to collect waste water. The Veronica bucket was developed by Veronica Bekoe. The Veronica bucket serves as a simple way to encourage proper hand washing using flowing water. Bekoe in an interview stated that the bucket was originally made to help her and her colleagues wash their hands under running water after each lab session. She said, "We are used to washing hands in a bowl with others washing in the same water, which will do more harm than good." These colleagues were contaminating their hands rather than decontaminating them. In addition to the Covid benefit of hand washing, Veronica Bucket is also essential for areas where potable water is not readily available. 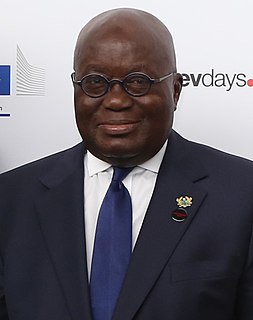 The presidency of Nana Akufo-Addo began on 7 January 2017. Following the 2016 Ghanaian general elections, Nana Akufo-Addo the flag-bearer of the New Patriotic Party, succeeded John Mahama as the 12th President of Ghana after winning by a landslide. He won a second term on 9 December 2020 in a tightly contested race against National Democratic Congress (NDC) candidate and former president, John Mahama.

Dorcas Affo-Toffey is a Ghanaian entrepreneur, philanthropist and politician. She is a member of the National Democratic Congress (NDC). She is the member of parliament for the Jomoro Constituency in the Western Region.

Victor Emmanuel Smith is a Ghanaian diplomat and politician, who is a member of the National Democratic Congress. He served as Ghana’s High Commissioner to the United Kingdom from 2014 and 2017. He also served as Ghana's ambassador to the Czech Republic during John Evans Atta Mills government.

Emmanuel Yeboah Bobbie, also known as Bob Pixel, was a professional Ghanaian photographer and graphic designer. He created his own brand in the form of documenting events like funerals and festivals. He worked with celebrities such as M.anifest, John Dumelo, Yvonne Nelson, Menaye Donkor, Jackie Appiah and others. He was to participate in the 2021 International Fashion Week in Amsterdam. He was also nominated for the 2021 Photographer of the Year in the Entertainment Achievement Awards.