Last updated September 27, 2022
Institution of the imperial family of the Ming and Qing dynasties

Established in 1389 by the Hongwu Emperor,it was based on previous institutions like the "Court of the Imperial Clan" (宗正寺,Zōngzhèng Sì) of the Tang and Song dynasties and the "Office of the Imperial Clan" (太宗正院,Tài Zōngzhèng Yuàn) of the Yuan dynasty. [3] Under the Ming dynasty,the Court was managed by the Ministry of Rites;during the Qing,it was outside the regular bureaucracy. [4] Under both dynasties,the Court was staffed by members of the imperial clan. [5] Imperial clansmen who committed crimes were not tried through the regular legal system. [6] Qing imperial clansmen were registered under the Eight Banners,but were still under the jurisdiction of the Imperial Clan Court. [7] The Court used regular reports on births,marriages,and deaths to compile the genealogy of the imperial clan (玉牒,Yùdié). [8] The imperial genealogy was revised 28 times during the Qing dynasty. [9] 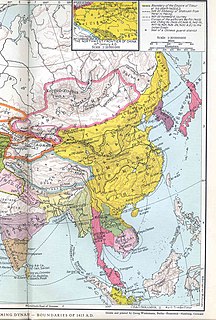 The Ming dynasty, officially the Great Ming, was an imperial dynasty of China, ruling from 1368 to 1644 following the collapse of the Mongol-led Yuan dynasty. The Ming dynasty was the last orthodox dynasty of China ruled by the Han people, the majority ethnic group in China. Although the primary capital of Beijing fell in 1644 to a rebellion led by Li Zicheng, numerous rump regimes ruled by remnants of the Ming imperial family—collectively called the Southern Ming—survived until 1662.

The Eight Banners were administrative and military divisions under the Later Jin and Qing dynasties of China into which all Manchu households were placed. In war, the Eight Banners functioned as armies, but the banner system was also the basic organizational framework of all of Manchu society. Created in the early 17th century by Nurhaci, the banner armies played an instrumental role in his unification of the fragmented Jurchen people and in the Qing dynasty's conquest of the Ming dynasty.

Hong Taiji, also rendered as Huang Taiji and sometimes referred to as Abahai in Western literature, also known by his temple name as the Emperor Taizong of Qing, was the second khan of the Later Jin dynasty and the founding emperor of the Qing dynasty. He was responsible for consolidating the empire that his father Nurhaci had founded and laid the groundwork for the conquest of the Ming dynasty, although he died before this was accomplished. He was also responsible for changing the name of the Jurchen ethnicity to "Manchu" in 1635, and changing the name of his dynasty from "Great Jin" to "Great Qing" in 1636. The Qing dynasty lasted until 1912.

The Seven Grievances was a manifesto announced by Nurhaci, khan of the Later Jin, on the thirteenth day of the fourth lunar month in the third year of the Tianming era of his reign; 7 May 1618. It effectively declared war against the Ming dynasty. 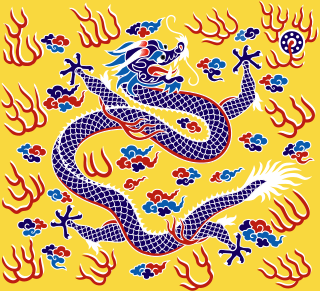 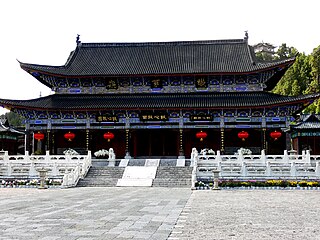 Tusi, often translated as "headmen" or "chieftains", were hereditary tribal leaders recognized as imperial officials by the Yuan, Ming, and Qing dynasties of China, and the Later Lê and Nguyễn dynasties of Vietnam. They ruled certain ethnic minorities in southwest China and the Indochinese peninsula nominally on behalf of the central government. This arrangement is known as the Tusi System or the Native Chieftain System. It should not to be confused with the Chinese tributary system or the Jimi system.

Shamanism was the dominant religion of the Jurchen people of northeast Asia and of their descendants, the Manchu people. As early as the Jin dynasty (1115–1234), the Jurchens conducted shamanic ceremonies at shrines called tangse. There were two kinds of shamans: those who entered in a trance and let themselves be possessed by the spirits, and those who conducted regular sacrifices to heaven, to a clan's ancestors, or to the clan's protective spirits. 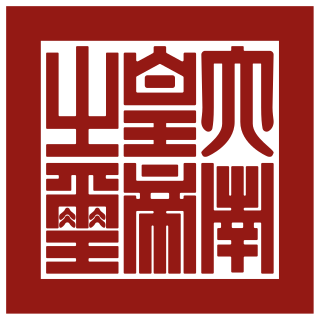 The House of Nguyễn Phúc, also known as the House of Nguyễn Phước, was a ruling family of Vietnam. It ruled from the city of Huế in central Vietnam beginning in 1600. As the Nguyễn lords, they often fought with the Trịnh lords, who were based in Hanoi. They were overthrown by the Tây Sơn dynasty in 1776.

A xunfu was an important imperial Chinese provincial office under both the Ming and Qing dynasties. However, the purview of the office under the two dynasties differed markedly. Under the Ming dynasty, the post originated around 1430 as a kind of inspector-general and ad hoc provincial-level administrator; such a xunfu is usually translated as a grand coordinator. However, since the mid-17th century, xunfu became the title of a regular provincial governor overseeing civil administration in the Qing dynasty.

The New Qing History is a historiographical school that gained prominence in the United States in the mid-1990s by offering a wide-ranging revision of history of the Manchu-led Qing dynasty of China. Orthodox historians tend to emphasize the power of the Han people to "sinicize" their conquerors in their thought and institutions. In the 1980s and early 1990s, American scholars began to learn Manchu and took advantage of newly opened Chinese- and Manchu-language archives. This research found that the Manchu rulers were savvy in manipulating their subjects and from the 1630s through at least the 18th century, emperors developed a sense of Manchu identity and used traditional Han Chinese culture and Confucian models to rule, while blending with models from other ethnic groups across the vast empire, including those from northern China, the Eurasian Steppe, Inner Asia, and Central Asia. According to some scholars, at the height of their power, the Qing regarded the Han Chinese as only a part, although a very important part, of a much wider empire that extended into the Inner Asian territories of Mongolia, Tibet, Manchuria and Xinjiang.

Evelyn Sakakida Rawski is Distinguished University Professor in the Department of History of the University of Pittsburgh and a scholar in Chinese and Inner Asian history. She was born in Honolulu, Hawaii, United States of Japanese-American ancestry. She served as president of the Association for Asian Studies in 1995–1996.

The Court of Imperial Sacrifices, also known as the Court of Sacrificial Worship, was a central government agency in several imperial Chinese and Vietnamese dynasties. It was generally in charge of conducting major state sacrificial ceremonies according to ritual regulations. In China, the office was created during the Northern Qi dynasty (550–577) and continued until the Qing dynasty (1636–1912). In Vietnam, it was created by Lê Thánh Tông in 1466, and continued until the Nguyễn dynasty.

The government of the Nguyễn dynasty, officially the Southern Court and commonly referred to as the Huế Court, centred around the emperor as the absolute monarch, surrounded by various imperial agencies and ministries which stayed under the emperor's presidency. Following the signing of the Patenôtre Treaty the French took over a lot of control and while the government of the Nguyễn dynasty still nominally ruled the French protectorates of Annam and Tonkin, in reality the French maintained control over these territories and the Nguyễn government became subsidiary to the administration of French Indochina. During World War II the Japanese launched a coup d'état outsting the French and establishing the Empire of Vietnam which was ruled by the Nguyễn government. During the August Revolution the Nguyễn government was abolished in the aftermath of World War II.

Lishui or shuijiao is a set of parallel diagonal, multicoloured sea-waves/line patterns. It originated in China where it was used by the Qing dynasty court prior to the mid-18th century. Lishui represents the deep sea under which the ocean surges and waves; it is therefore typically topped with "still water", which is represented by concentric semicircle patterns which runs horizontally. Lishui was used to decorate garments, including the bottom hem and cuffs of some of the court clothing of the Qing dynasty. It could be used to decorate as wedding dress items. It is also used to decorate Chinese opera costumes, typically on the bottom hem of the costumes. It was also adopted in some court clothing of the Nguyen dynasty in Vietnam under the influence of the Qing dynasty.