The Imperial Rule Assistance Association (Japanese: 大政翼贊會/大政翼賛会, Hepburn: Taisei Yokusankai), or Imperial Aid Association, was the Empire of Japan's wartime organization created by Prime Minister Fumimaro Konoe on October 12, 1940, to promote the goals of his Shintaisei ("New Order") movement. It evolved into a "statist" ruling political party which aimed at removing the sectionalism in the politics and economics in the Empire of Japan to create a totalitarian one-party state, in order to maximize the efficiency of Japan's total war effort in China. [3] When the organization was launched officially, Konoe was hailed as a "political savior" of a nation in chaos; however, internal divisions soon appeared.

Based on recommendations by the Shōwa Kenkyūkai (Shōwa Research Association), Konoe originally conceived of the Imperial Rule Assistance Association as a reformist political party to overcome the deep-rooted differences and political cliques between bureaucrats, politicians and the military. During the summer of 1937, Konoe appointed 37 members chosen from a broad political spectrum to a preparatory committee which met in Karuizawa, Nagano. The committee included Konoe's political colleagues Fumio Gotō, Count Yoriyasu Arima and ex-syndicalist and right-wing spokesman Fusanosuke Kuhara. The socialist and populist left wing was represented by Kingoro Hashimoto and the traditionalist military wings by Senjūrō Hayashi, Heisuke Yanagawa and Nobuyuki Abe.

Konoe proposed originally that the Imperial Rule Assistance Association be organized along national syndicalist lines, with new members assigned to branches based on occupation, which would then develop channels for mass participation of the common population to "assist with the Imperial Rule". [4]

However, from the start, there was no consensus in a common cause, as the leadership council represented all ends of the political spectrum, and in the end, the party was organized along geographic lines, following the existing political sub-divisions. Therefore, all local government leaders at each level of village, town, city and prefectural government automatically received the equivalent position within their local Imperial Rule Assistance Association branch. [5]

Prior to creation of the Imperial Rule Assistance Association, Konoe had already passed the National Mobilization Law, which effectively nationalized strategic industries, the news media, and labor unions, in preparation for total war with China.

Labor unions were replaced by the Nation Service Draft Ordinance, which empowered the government to draft civilian workers into critical war industries. Society was mobilized and indoctrinated through the National Spiritual Mobilization Movement, which organized patriotic events and mass rallies, and promoted slogans such as "Yamato-damashii" (Japanese spirit) and "Hakkō ichiu" (All the world under one roof) to support Japanese militarism. This was urged to "restore the spirit and virtues of old Japan". [6]

Some objections to it came on the grounds that kokutai , imperial polity, already required all imperial subjects to support imperial rule. [7]

In addition to drumming up support for the ongoing wars in China and in the Pacific, the Imperial Rule Assistance Association helped maintain public order and provided certain public services via the tonarigumi neighborhood association program. [8] It also played a role in increasing productivity, monitoring rationing, and organizing civil defense.

The Imperial Rule Assistance Association was also militarized, with its members donning khaki-colored uniforms. In the last period of the conflict, the membership received military training and was projected to integrate with civil militia in case of the anticipated Allied invasion.

As soon as October 1940, the Imperial Rule Assistance Association systemized and formalized the Tonarigumi , a nationwide system of neighborhood associations. The November 6, 1940, issue of Shashin Shūhō (Photographic Weekly Report) explained the purpose of this infrastructure:

The Taisei Yokusankai movement has already turned on the switch for rebuilding a new Japan and completing a new Great East Asian order which, writ large, is the construction of a new world order. The Taisei Yokusankai is, broadly speaking, the New Order movement which will, in a word, place One Hundred Million into one body under this new organisation that will conduct all of our energies and abilities for the sake of the nation. Aren't we all mentally prepared to be members of this new organization and, as one adult to another, without holding our superiors in awe or being preoccupied with the past, cast aside all private concerns in order to perform public service? Under the Taisei Yokusankai are regional town, village, and tonarigumi; let's convene council meetings and advance the activities of this organization. [9]

In February 1942, all women's associations were merged into the Greater Japan Women's Association which joined the Imperial Rule Assistance Association in May. Every adult woman in Japan, excepting the under twenty and unmarried, was forced to join the Association. [10]

Likewise, in June, all youth organizations were merged into the Greater Japan Imperial Rule Assistance Youth Corps (翼賛青年団), based on the model of the German Sturmabteilung (stormtroopers). [11]

In March 1942, Prime Minister Hideki Tōjō attempted to eliminate the influence of elected politicians by establishing an officially sponsored election nomination commission, which restricted non-government-sanctioned candidates from the ballot. [12] After the 1942 Japanese General Election, all members of Diet were required to join the Yokusan Seijikai (Imperial Rule Assistance Political Association), which effectively made Japan a one-party state. The Imperial Rule Assistance Association was formally dissolved on June 13, 1945.

During the Allied occupation of Japan, the American authorities purged thousands of government leaders from public life for having been members of the Association. 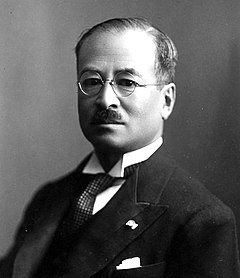 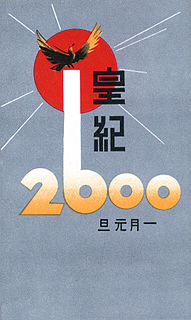 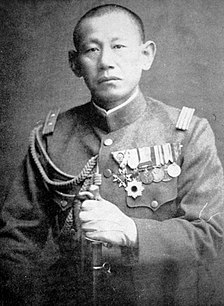 Kingoro Hashimoto was a soldier in the Imperial Japanese Army and politician. He was famous for having twice tried to stage a coup against the civilian government in the 1930s.

The Great Japan Youth Party, later known as the Great Japan Sincerity Association, was a nationalist youth organization in the Empire of Japan modeled after Nazi Germany's Hitler Youth. It was active from 1937 until its dissolution in 1945.

The Yokusan Sonendan was an elite para-military youth branch of the Imperial Rule Assistance Association political party of wartime Empire of Japan established in January 1942, and based on the model of the German Sturmabteilung (stormtroopers). 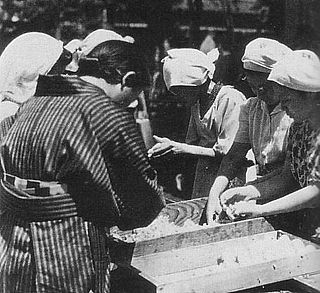 The League of Diet Members Supporting the Prosecution of the Holy War was a political party coalition in the lower house of the Diet of Japan formed on March 25, 1940, with the backing of the Imperial Japanese Army as a reaction against a speech made by Saitō Takao, of the Rikken Minseitō critical of the government’s aggressive policies in the Second Sino-Japanese War.

The Shōwa Kenkyūkai was a political think tank in the pre-war Empire of Japan. 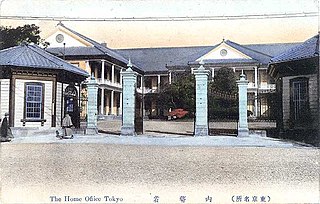 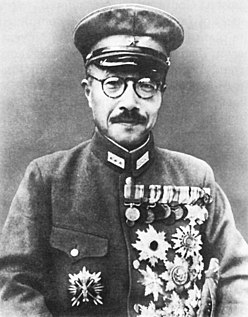 General elections were held in Japan on 30 April 1942 to elect members of the House of Representatives. They were the only elections held in Japan during the Pacific theater of World War II. By this time, the House of Representatives had lost all power to the military dictatorship, a process that started with the "Manchurian Incident" when the Imperial Army invaded Manchuria without approval from the cabinet in 1931. Since 1932 when Admiral Viscount Saitō Makoto was appointed prime minister with the first so-called "national unity cabinet", few members of the political parties in the House of Representatives had any significant role in government. Additionally, the military had at this point transformed Japan into a totalitarian one-party state, with only the Imperial Rule Assistance Association and Imperial Army-sponsored "independents" contesting the election.

Count Yoriyasu Arima was a Japanese politician before and during World War II. His wife was the daughter of Prince Takeda Tsunehisa. 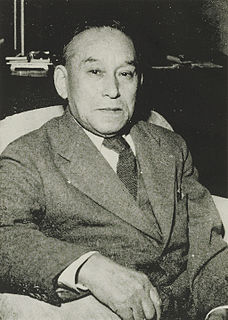 Shōzō Murata was a Japanese entrepreneur, cabinet minister and diplomat before, during and after World War II.

Takeru Inukai was a Japanese politician and novelist active in Shōwa period Japan. Also known as "Inukai Ken", he was the third son of Prime Minister of Japan Inukai Tsuyoshi. 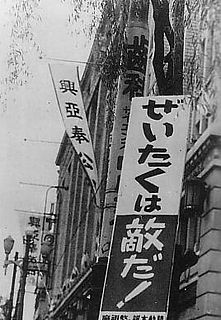 Fascism in Asia refers to political ideologies in Asia that adhered to fascist policies, which gained popularity in many countries in Asia during the 1930s. 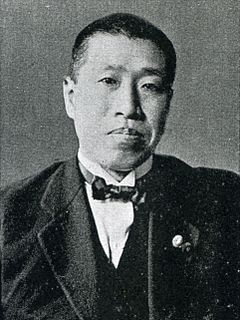 Ryūtarō Nagai, was a politician and cabinet minister in the Empire of Japan, serving a member of the Lower House of the Diet of Japan eight times, and four as a cabinet minister. He was noted in his early political career as a champion of universal suffrage, social welfare, labor unions, women's rights and Pan-Asianism.

Toshio Shimada was a politician and cabinet minister in the pre-war Empire of Japan.

Taketora Ogata was a Japanese journalist, Vice President of the Asahi Shimbun newspaper and later a politician. During the war, he joined the Imperial Rule Assistance Association. After the end of the war, he was purged from public service. Later, he became the Chief Secretary of the 4th Yoshida Cabinet, Vice President and then President of the Liberal Party of Japan of Japan, but he died before becoming a prime minister. 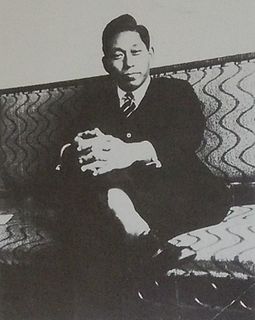 Shigeyoshi Matsumae was a Japanese electrical engineer, inventor of the non-loaded cable carrier system, the Minister of the Ministry of Communications, politician and the founder of Tokai University. He is also known as a patron of Yasuhiro Yamashita, a judo champion from Tokai University.